The Essay Project: Survey of the Landscape 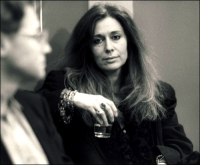 The essay we're reviewing today came from the Jorie Graham introduction to the anthology The Best American Poetry 1990. Graham has a portion of the essay on her website: https://www.joriegraham.com/prose_american_poetry_intro. You can also read a copy of the full essay (with marginalia) here: https://www.mirandafield.com/static/classes/intro-graham.pdf or you can buy the book.

Often, introductions to volumes of poetry (singular or anthologies) are no good; they’re often too specific to certain poems yet unread. This essay, however, was great, and from Jorie Graham it’s no surprise. If you read one poetry essay in your life…this one is a good candidate. So I'll be quoting lots of it.

Part 1 is a great dip into the experience of being at a poetry and prose reading:

"I went to a reading recently--fiction and poetry. It was a warm Indian summer night. The man introducing spoke first about the novelist--her meteoric rise to the top along the fast track. Book awards. Movie deals. The person in question stood up and read wonderful, funny stories. I laughed out loud; listened to the sentences flowing by--their aggressive overtaking of the space. There was no silence, there was the run run of story over it all. It sprayed forward over the unsaid until it was all plot. People changed or didn't….

Then our host introduced the poet--one of our very best. The introductory remarks referred to the 'dark times poetry is in.' People resettled in their chairs. The man in question stood up to read, looked out at us over his glasses, cleared his throat. He tried to say something funny to put us at our ease, but we weren't. What was he going to do? Where did the wonderful warm sensation of story go? A poem began. Not a little story told in musical rhythms, but a poem. Oh, it had story. And it was music. But it seemed to begin out of nowhere. And it moved irrationally--by the standards the fiction had set. It leapt. It went too suddenly to the heart of the matter. Why was I feeling so uneasy? I didn't feel myself thinking anymore. I wasn't feeling lifted or entertained. My hands felt heavy. My body felt heavy. The air into which language had been pouring for almost an hour felt heavy….

Now it was words into an element that was crushing in its power and weight. I thought of Sartre's notion that prose writers tame language and that it's up to poetry to set it free again..

I felt myself having to "listen" with other parts of my sensibility, felt my mind being forced back down into the soil of my senses. And I saw that it was the resistance of the poem--its occlusion, or difficulty--that was healing me, forcing me to privilege my heart, my intuition--parts of my sensibility infrequently called upon in my everyday experience in the marketplace of things and ideas. I found myself feeling, as the poem ended, that some crucial muscle that might have otherwise atrophied from lack of use had been exercised. Something part body, part spirit. Something the species should never evolve away from. Something I shouldn't be living without. The poem must resist the intelligence / almost successfully, whispered Wallace Stevens."

Next to that last paragraph, my 1990s self wrote, “I don’t agree with this.” Huh. Interesting. Because now I do. It’s a good defense of difficulty.

Part 2 is more of a defense of difficulty, how inaccessibility is leveled against poets and their retreats into “saying narrative is all there is or should be, saying self should be ostracized, saying free verse is fatal, or all rhyme and meter reactionary, talking about elitism, about how poetry has failed to communicate…"

Remember in Stephen Dobyns' essay the definition of poetry was 'to communicate.' I don’t disagree with that but I think there can be poetry that thwarts communication too.

Graham talks about “the fact that poetry implicitly undertakes a critique of materialist values.” I think this is mostly true (to read poetry might be a desire to escape that world) but there are conceivably poems that might encourage materialism. Poetry (and not just political poetry) often does explicitly challenge modern values. Graham talks about poetry’s “truer, or more resonant, more supple values.”

Back to difficulty, she compares difficult poetry to modern dance and carpentry:

“Of course, with woodworking or ballet, one can still enjoy what one barely grasps…but with poetry readers feel like they’re missing something...[or]... that one is stupid, blind.”

She talks about "dream logic, mystical visions and intuitive, irrational thinking, leaps beyond cause and effect…. the merging of its irrational procedures with the rational nature of language.” These experiments seem to be interesting tests of the plasticity of language, sentence making, storytelling sense, but they’re not for everybody.

I do disagree with this statement: “Aren't such accusations of elitism rather condescending to the people on whose behalf they are made?” because I don’t think accusations of elitism are always made on behalf of any reader, but by readers directly. At least in my experience. But then she discusses poetry that slows you down as being an anecdote for modern language (and this was all before the Internet):

“the terminal "slowness" of speech in relation to the speedier verbal image as a medium for sales (of objects, people, ideas, of verisimilitude, of desire)… ); a disrespect for all nonlucrative activities; a general impatience with depth, and a shortened attention span...Sound bites, shortcuts, clips, trailers, minimalist fragmented 'dialogue,' the Reagan-era one-liner on the way to the helicopter: the speed with which an idea must be 'put across' is said to be determined not just by monetary considerations, but by the speeded-up, almost decimated attention span of the bored, overstimulated viewer who must be caught, bought, on the wing, as he or she is clicking past, 'grazing' the channels, wanting to be stopped, but only momentarily."

"The genius of syntax consists in its permitting paradoxical, 'unsolvable' ideas to be explored, not merely nailed down, stored, and owned; in its permitting the soul-forging pleasures of thinking to prevail over the acquisition of information called knowing.”

Part 3 is an amazing summary of the smorgasbord of options, not just difficult poems:

She gets into this idea of Americanness here a bit in this section (although there’s a whole later section for that):

“We are faced with a more historical (and American) distrust of articulateness:'inarticulateness' as stoicism, perhaps--the terseness we recognize in our Western folk heroes--as if to speak a full sentence, to yield to easeful speech, were a sensual activity one cannot, or should not, afford to indulge."

She talks about minimalism, Zen notions of restraint, suppression of ego, “inward abbreviation,” “the coding covert political activity requires…to use James Wright's phrase, expresses a deeply-held American belief that the simpler the utterance--the closer to the bone of the feeling--the better the chance of getting the self through uncontaminated by language: speech a vehicle that can "betray" honest feeling…"

And various notions of the self: the invented or invoked self, a constructed self, a mask or mythic persona, “the tradition of "honest" speech on American soil, and there are many poets who attempt to merge the two impulses.”

She talks about the sense of seeking:

"investigations rather than as conclusions. Words--or the gaps between them--are used to recompose a world, as if these poets were looking for a method by which to experience the world once again. We might find ourselves being asked implicitly where the poem actually is: In the world? In the language? In the reader's interpretation or in the poet's intention?...the increasingly elliptical lyric poets…uses or serial”

And writing devices that hint toward new media experiments:

"break the fluid progress of the poem, that destabilize the reader's relationship to the illusion of the poem as text spoken by a single speaker in deep thought, aroused contemplation, or recollection. These interferences force the reader out of a passive role and back into the poem as an active participant….. the lust-for-forwardness, with all its attendant desires for closure, shapeliness, and the sense that we are headed somewhere and that we are in the hands of something.”

And then this was very interesting paragraph:

"You'll find the undiminished, or unintimidated, eloquence of our classical believers--perhaps only apparently unperturbed by the desperate fray; poets in whom the repose of counted language is perhaps the highest form, today, of bravery."

The online essay ends here, but the book essay has 3 more sections.

Then she talks about confessional poems when they aren't working:

“The poetry that fails the genius of its medium today is the poetry of mere self. It embarrasses all of us. The voice in it not large but inflated. A voice that expands not to the size of a soul…but to the size of an ego."

She says “a true poem…puts the self at genuine risk.”

I again suspicious of proclamations about “the true/real/correct" poem thing. But a good poem can do that. She says, “the poet must move to encounter an other, not more versions of the self….something the writer risks being defeated—or silenced—....How sincere are we about wanting to go where the act of a poem might take us? Do we not often, instead, take the poem merely where we want to go—protecting ourselves?”

I’m guilty of this. Sad face.

More about difficulty: Difficulty is…not in any way synonymous with…laziness.”

She says every generation has to restore the role of language and language and “do it essentially from scratch” to make works “full again…to clean the language of its current lies.”

Section 5 goes into what is American about these poets. This sentence wasn’t as interesting as what she’s already said about American traits in prior sections. She struggles to define the voice and personality, the jazz quality, the self-aware media events, attempts to being both historical and ahistorical...breakdancing on the surface and breaking the flow of anything that would thicken into history." Manifest destiny, progress, and some stuff I can’t even decipher.

Section 6 wraps it up saying there's “no voice elusively attached to region, race, gender, class…hybrids of styles, un-ironic or beyond post-modernism, more of a “stylistic searching…the poetic map of the country reads far less like a set of rival encampments, as the various polemicists would have us believe, and far more like a wonderfully varied and passionate family argument” where “cross-pollination is going on.”

That’s nice to hear. I hope its true.

She does see evidence of “deeply political” poetry concerned with “the condition of the Republic.”

So this essay is both a timely snapshot of poetry in American in 1990 and a survey of the landscape in a more solid sense.