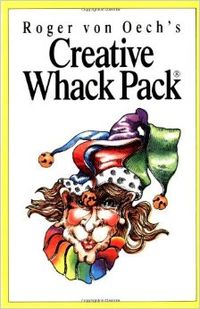 Sometimes poetry can be a very head-to-paper activity. Sometimes it good to inject something tactile in between.

I've had these games for year and sometimes I take them to small, informal writing groups.

Roger von Oech’s "Creative Wack Pack" are great cards to stimulate creative thinking.  There are blue Exporer cards (a man with binoculars) that cover aspects of how we go looking for inspiration. The orange Artist cards (a head with its hair exploding) cover idea generation. The green Judge cards (an old man with a gavel) deal with evaluating our ideas. And finally, the red warrior cards (a warrior helmet) give tips for inventive ways to implement ideas.

Included is a book of ideas on how to use the cards, either as individual exercises, in group workshops, or as an oracle.

Each card tells a story with a final lesson learned.

Here’s a sample of one from each group:

Explorer card, Get out of Your Box: the story is about cutting across disciplinary boundaries and borrowing for ideas.

Artist card, Reverse: reverse how you look at something to dislodge assumptions, the example being when everyone else looks one way at a sunset, look behind you into the darkness. How can you reverse the way you look at an idea?

Judge card, Conform: the story is about St. Augustine being told "When in Rome…," the question being to what standards should you be conforming?

Warrior card, Do the Unexpected: the story is from 1334. Hochosterwitz castle was being besieged and a commander did the opposite of what was expected by the enemy, the lesson being use a  surprising tactic to reach your objective. 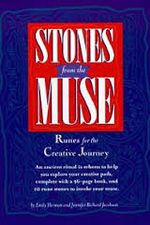 I also have a game called Stones from the Muse, Runes for the Creative Journey. There are 10 double-sided rune stones in a bag and a book. You can draw one stone a day. Yesterday, I drew the Tool rune (a crude pick axe) which is about taking action. Or you can draw three or four stone configurations. I drew two more to do a reading called "immediate picture, big picture, action required." My second rune looked like a tadpole (the transformation rune) and the third looked like a swirl (the seed rune) which dealt with idea composting and fertility. The booklet has long descriptions of each rune and ideas for action steps. 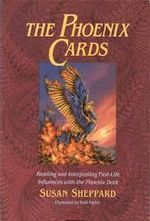 The first creative oracle I purchased in college were these phoenix cards. The idea behind them is that you will draw the card that most represents your past life culture and its influences on your current life. For years, I have always been drawn immediately to the Zen Buddhist card. For years I researched Zen to figure out what that meant.

The cards each have radically different cultural aesthetics and most people only gravitate toward one or two of them. Strangely, when I used the cards to read everyone in my Bronxville, NY writing group years ago, the writers did claim the readings were pretty good. One friend said her reading was more like her than any of us could ever know.

I’ve ever only gravitated to the Zen card. Eliminating that card today, I picked  the Medieval Illumination. And I have to say, its description of me wasn’t too far off either. 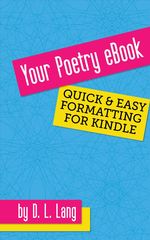 I'm a big believer that you don't need to fork over money to an eBook designer to create an eBook version of your poems. That is, beyond what you will spend to design your physical book. There are many poets out there insisting poetry can't be designed for electronic book reading. But I've been reading books of poems on my Kindle for years now. And if they're priced right, I buy books of poems on my Kindle I normally wouldn't buy in print. This usually happens when I want to test out a new poet or when I want to read a book but not necessarily "collect" it on my bookshelf.

There are special formatting issues for poems on eBook. Some special indenting creates problems, but over the last few years these issues have been overcome by some lit-minded, html-savy people who are generous enough to share their tricks with us.

Your Poetry eBook, Quick and Easy Formatting for Kindle by D.L. Lang is a great start for newbies. It's cheap and quick and informative for any poet who wants to stay up-to-date on how their books are made.

Publishing by Gail Godwin was recently reviewed in Entertainment Weekly, whose review tells us the book “explores the writer’s shifting place in the publishing industry’s disheartening transformation—from a place where tweedy editors spent years nurturing gifted young writers to a marketing machine where authors must now come with ready-made personal brands.” 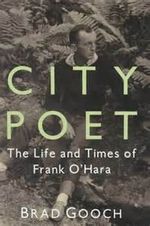 I just finished my first big experiment in reading someone’s collected works at the same time I read the biography. This idea started when I finished Edna St. Vincent Millay’s biography and then started her selected poems having forgot all the anecdotal stories from the biography.

I decided to slowly go through Donald Allen’s collected tome of O’Hara while reading City Poet by Brad Gooch, or as Monsieur Big Bang like to call it, that big book by The Gooch.

I started at the end of 2013 and finished just before Christmas in 2014! It took a year of bedtime reading!

I loved the biography and how its stories and poets overlapped with my studies on local Santa Fe poets over the same time-period. For instance, one line of the biography declares how O’Hara despised Vachel Lindsay.

The collected poems were a bit of a slog, containing over 400 pages of small printed verse. Many of his experiments were interesting at first but tedious after many incarnations; but I felt by the end of it I had my own personal little selected list of gems.

In any case, his famous poems are famous for a reason.

Neruda is back in the news with investigations on his possible poisoning.

The Hindu does a short piece on protests poetry.

The Huffington Post has a story on Rupi Kaur, "The Poet Every Woman Needs to Read.

A tale of two Iranian poets: "Iran has long been one of the few countries where poetry enjoys mass popularity. So, it came as no surprise that the death earlier this week of the poet Moshfeq Kashani was treated as a major event with a special message from Supreme Guide Ali Khamenei paying tribute to the poet and miles of coverage in the official media. Kashani collapsed and died during a ceremony honoring another poet in Tehran...At the same time, however, the same authorities that heaped praise on the 89-year-old Kashani were determined to prevent any attempt at marking the first anniversary of the execution of another poet, the much younger Hashem Shaabani, who was sentenced to death by hanging on a charge of “waging war on God”.

I've added new quotes on writing strategies and narcissism to my book page for Writing in the Age of Narcissism.

We haven't done these in a while. These are all by poet Mark Nepo and these quotes can help guide us all through ways of seeing and intellectualizing what we write about:

"Live loud enough in your heart
and there is no need to speak."

"If you can’t see what you’re looking for, see what’s there."

"No amount of thinking can stop thinking."