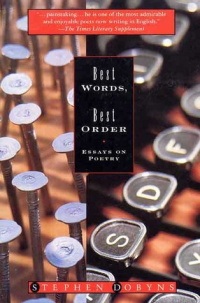 This week's essay is Stephen Dobyns’ “Metaphor and the Authenticating Act of Memory” which can be found in his book, Best Words, Best Order.

This is a great essay if you’re into metaphorical writing. If you’re more of a language poet, not-so-much. Dobyns refers to symbolist poets who feel a poet is a “bright light” but disagrees with them and believes a poem should communicate something to readers.

If you’ve read Dobyns, he’s not an experimental, language poet. He seeks communication and for him the metaphor is a big part of that explosion of understanding between two people.

The essay is full of declarations about what poetry is:

“..if the poem is incapable of establishing an intimate relationship with is audience, then it simply isn’t a poem.”

He does invoke Gertrude Stein and her theories about cliched metaphors. He attributes this to sophistication in readers. For example, readers today are too smart for old metaphors that connect the loneliness to the moon. I see the issue as more that metaphors have overstayed their welcome and become a tiresome guest, or maybe have been so fully swallowed up into our subconscious metaphorical thinking they're not surprising anymore. In a sense, these dead metaphors have just sublimated themselves into everyday language.

Later Dobyns says, “A poem should obey the rules of simple discourse: information must be exchanged and understood.”

This sounds like a challenge that language poets would be happy to take up. Poetry is impressively evasive of “shoulds.” On the other hand, poems about the gaps in communication are getting pretty long in the tooth themselves in these days of propaganda and misinformation. It feels like we’ve willfully weakened a collective communication muscle.

This is going to sound strange, but I kind of feel a mental-orgasmic pleasure at conceptualizing metaphors and don't quite understand people who have a distaste for them. Sometimes I wonder if those people might have fewer metaphorical taste buds or sensations, or are just no good at metaphorical mapping…or maybe they have too many taste buds and are  overwhelmed by the concepts. Nothing wrong with that. If you don’t enjoy logical, analytical thinking, you won’t enjoy metaphors.

But this essay is about metaphors and poems seeking participation from their readers and how the connection can be aided with metaphorical language, including simile, allegory, analogy, to use Dobyns’ examples.

Dobyns says, “...the actual subject of any poem is the reader. The poem should be where the reader sees himself afresh, momentarily freed from the trappings of the world. But for this to occur, the reader must be able to find his way into the poem as a participant.”

He names types of recognition which he says should be balanced in a poem: intellectual, physical and emotional.

He likes open-ended, somewhat mysterious metaphors and he gives a treasure trove of great examples, which would be useful for classroom instruction I would bet, my favorite being, “A liar is like an egg in mid air.” He also uses many full poems as examples, including Tomas Transtromer’s “Face to Face,” M.W. Merwin’s “When You Go Away,” Jean Follain’s “Signs,” Michael Ryan’s “Consider a Move,” the old poem “Western Wind,” Stanley Kunitz “My Sisters,” James Wright’s “Outside Fargo, North Dakota,” and Wallace Stevens’ “The House Was Quiet and the World Was Calm.”

He  defines mystery vs. vagueness which only ever leads to dead ends and he puts early Imagist poets in the vague cateogry  in a convincing argument. There needs to be sufficient information for possible comparison and he says, “Imagist attempted to erase the comparative role of the image.” Which, yeah…they kinda did. But they wanted you to supply the second half. In a way, that can be seen as more participatory. Although he’s right, it limits communication between poet and reader regarding the exact same idea. In the case of these Imagist poems, they’re like exercises in a workbook; what the reader comes up with the poet will never know.

The essay also talks about the metaphorical plane of reference and the plane of feeling. There’s a great section about how our mind might understand metaphors subconsciously before we assemble them consciously.