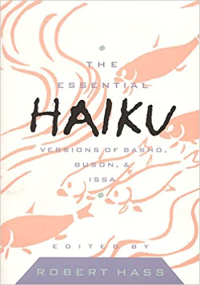 The last time we discussed haiku we were working through 52 weeks of haiku meditations (and that seems like a lifetime ago!).

I have no idea where this little packet came from, I'm guessing not from the Sarah Lawrence essay class, if only because it's not an essay, but the introductory chapters of The Essential Haiku, Versions of Bashō, Buson and Issa by Robert Hass. It could have been distributed at a poetry conference workshop from somewhere or even from another class somewhere. Not sure. But it's in the essay stack now so...here we go.

The packet includes the full Introduction chapter and then the separate biographical pages introducing each poet, along with some curated poems from whomever put the little packet together. I’ve culled a smaller set in each section below.

All of these poets spent "years in travel, sleeping at monasteries and inns...[as] poet-wanderers...for whom travel and its difficulties were a form of freedom and a way of disciplining the mind...All three became teachers of poetry."

Many of the season references reflected "a Japanese way of thinking about time and change." For example, snow itself had many associative meanings particular to Japanese culture having to do with exposure and bareness. Spiders were a "traditional mid-summer theme." Seasons gave "a powerful sense of a human place in the ritual and cyclical movement of the world. If the first level of a haiku is its location in nature, its second is almost always some implicit Buddhist reflection on nature. One of the striking differences between Christian and Buddhist thought is that in the Christian sense of things, nature is fallen, and in the Buddhist sense it isn't."

What appeals to us, Hass says, is the "quality of actuality, of the moment seized on and rendered purely, and because of this they seem to elude being either traditional images of nature or ideas about it....this mysteriousness...they don't generalize their images...mysteriousness of the images themselves." Hass quotes Roland Barthes in noting the poems' "breach of meaning" as post-modern objects, as "deconstructions and subverters of cultural certainties" and the "silence of haiku, its wordlessness."

Hass then talks about how in particular Zen Buddhism "provided [these poets] training in how to stand aside and leave the meaning-making activity of the ego to its own devices. Not resisting it, but seeing it as another phenomenal thing, like bush warblers and snow fall." 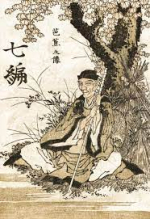 Bashō was the calm ascetic and seeker who wrote what was then called hokku. Many of his poems dealt with "the transience of things" and "spiritual loneliness...profound loneliness and sense of suffering." His poetry centered on "a sense of sabi...loneliness, or aloneness, or the solitariness akin to no-mind, which gives intense concentration, and curious lightness, and a tragic sense to the work"

Bashō "insisted on poetry as a serious calling...that it amounted to years of immensely subtle thinking about how to give resonance and depth to the image"

He was credited with reinventing the form and studied Chines poetry, Taoism and Zen. One of his students brought him a gift of a banana tree (bashō) from which he took his name. In a big city fire in Endo, his house burned down.

"He thought about giving up poetry, but confessed that he couldn't do it."

Deep autumn--
my neighbor,
how does he live, I wonder?

Even in Kyoto--
hearing the cuckoo's cry--
I long for Kyoto.

A bee
staggers out
of the peony. 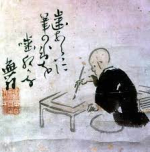 Bunson was an artist of painterly precision who loved the of materials of art and color and the shape of things, according to Hass. He was a distinguished and successful painter and his poems Hass describes as painterly, "visually intense" with a "aesthetic detachment…in love with color. There is a sense in them also of the world endlessly coming into being."

Hass says Bunson’s haiku are like early poems of Wallace Stevens ("The Snowman" and "Thirteen Ways of Looking at a Blackbird.")  Buson was critical of contemporary haiku masters and said:

"These days, those who dominate the kaikai world peddle their different styles, ridicule and slander everyone else, and puff themselves up with the title of master. They flaunt their wealth, parade their ignorance, and promote themselves by arranging their students' innumerable wretches verses in anthologies. Those who know better cover their eyes in embarrassment and are ashamed of such behavior."

So not much has changed.

Hass says scholars like to compare the objective Buson and the subjective Bashō.

Tethered horse;
snow
in both stirrups.

Coolness--
the sound of the bell
as it leaves the bell.

His Holiness the Abbot
is shitting
in the withered fields.

The mad girl
in the boat at midday;
spring currents.

Green plum--
it draws her eyebrows
together.

A gust of wind
whitens
the water birds.

The owner of the field
goes to see how his scarecrow is
and comes back.

Escaped the nets,
escaped the ropes--
moon on the water.

The old man
cutting barley--
bent like a sickle.

Calligraphy of geese
against the sky--
the moon steals it.

Before the white chrysanthemum
the scissors hesitate
a moment.

Issa was the humanist of pathos and humor and anger.

Issa means "a cup of tea" or "a single bubble in steeping tea." He has been described as "Whitman or Neruda in miniature" and has also been compared to Robert Burns and Charles Dickens with his "humor and pathos, the sense of a childhood wound, the willingness to be silly and downright funny, and the fierceness about injustice." He could also be "didactic and sentimental" but in his best work he was "quite unlike anyone else, the laughter cosmic, the sense of pain intense...with no defenses against the suffering in the world."

Like Buson, he was a Pure Land Buddhist and he could be "inclined to moralize" but that there is an "edge of rage in his poems, something very near cynicism." He often wrote about "the smallest creatures....flies, fleas, bedbugs, lice" and his work has been described as "countrified haikas" with "vernacular language" and "local slang."

As it happened his house also burned down.

(For many years I had a NYC Metro placard with that poem on it, which I picked up one night from a stack of donated Metro posters at a poetry event in NYC.)

New Year's Day--
everything is in blossom!
I feel about average.

Under my house
an inchworm
measuring the joists.

Even with insects--
some can sing,
some can't.

Don't know about the people,
but all the scarecrows
are crooked.

Blossoms at night,
and the faces of people
moved by music.

The gorgeous kite
rising
from the beggar's shack.

Cricket
chirping
in a scarecrow's belly.

Autumn evening--
it's no light thing
being born a man.

The holes in the wall
play the flute
this autumn evening.

Writing shit about new snow
for the rich
is not art.

Last time, I think,
I'll brush the flies
from my father's face.

Autumn moon--
a small boat
drifting down the tide.

Insects on a bough
floating down river,
still singing.