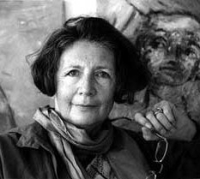 The next essay is a bit of a departure from the other SLC class essays, It’s the preface and two chapters from The Untouched Key, Tracing Childhood Trauma in Creativity and Destructiveness by Alice Miller (translated from German).

In the book, psychologist Miller explores the way childhood events affect paitners and writers and how she can see childhood influence in pieces of art. She considers these clues to works “lost keys.”

The first chapter is on Pablo Picasso, particularly his “late works in Basel” painted when “he was 90 years old.”

She talks about how he “disregarded all convention as well as his own technical ability and attained what he had wished or all his life: the spontaneity and freedom of a child, which his perfectionism robbed him of in childhood…I seemed to be sensing a man’s last strenuous efforts to express the most hidden secrets of his life with every means at his disposal before it’s too late, before death takes the brush from his hand.”

Miller says, “a great deal has been written about the sexual themes…attributed to his declining libido” but she feels the sorrow exhibited in his late work reaches back to childhood trauma and not “an aging man’s regrets at his waning sexual vitality.”

She sensed this, she says, from “the themes," “the force of the brush movements,” “the vehement way he sometimes applied the color and conjured up new feelings that had to be given form,” his “haste to produce the unsayable, to say it with colors.”

But then again, these things could indicate almost anything.

But Miller continues, “since the efficiency of defense mechanisms decreases in old age, since repression works with less ingenuity, it was possible, I thought, that traces of childhood trauma not evident before might become visible in his late works.”

And the trauma Miller explores was based on his intense “reluctance to go to school” which was presumed to have been caused by a 1884 earthquake in Málaga when he was three years old. His parents had to flee with the family and the stress of the escape possibly caused his mother to go into premature labor days later before the family could safely return home. She sees implicit support in a poem Picasso wrote in 1936 about a cacophony of screaming (children, women, birds, flowers, beams and stones, bricks, chairs, curtains…paper, etc.) Miller sees a visual depiction of the earthquake (as seen by a child) in Guernica (1937) with its “horror, terror, and helplessness…total destruction…he even painted himself over to the right as the bewildered child in the cellar.”

Miller says Picasso “always abandoned a style once he had developed it…but the theme of the distorted human body haunted him all his life.” She says “little children often express their traumas in a painting….it took forty years before he was able to paint like a child, that is, to let his unconscious speak.”

She admits most biographers gloss over Picasso’s childhood in total, and this earthquake’s significance in particular.

I’ve been exploring childhood myself (in some subconscious ways, too) so this was an interesting topic for me. But like all things, I half believe it and half don’t. She’s probably right in general but she simply doesn’t have enough evidence in Picasso’s case to make a definitive, convincing case; so she just rehashes the same arguments multiple times and across many pages as if rewording the few pieces of evidence will prove a theory to be true.

Very sketchy biographical information does not equate to threads drawn out from years of therapy. As a psychologist and psychoanalyst, Miller would know this.

In the other chapter included in the set, Miller talks about an exhibit of Chaïm Soutine. She draws parallels between the childhood's of Soutine and Hitler and how one man became an artist and the other a despot.

She talks about Soutine’s paintings filled with “strange, twisted, tormented figures…houses, streets, and squares…that looked as though they might start to quiver at any moment...I asked myself whether the extremely threatening situation of the Nazi Holocaust had motivated, or even compelled, Soutine to paint the work as shaking and falling apart.”

She talks about how Soutine and Hitler were both punished severely with “brute force” for wanting to become artists, Soutine because his family were Orthodox Jews and Hitler because his family was totalitarian. In Soutine’s case, he had an advocate in his mother which helped “him develop a sense of justice.” Hitler had no advocates.

Miller then goes on to talk about the childhood of Paul Celan and “the witnesses who rescued him” from his yard-locked life where “the world lies on the other side of the chestnut trees” and Dostoyevsky whose father “treated his serfs with such cruelty that in 1839 they murdered him” and Stalin and his childhood of extreme poverty not dissimilar to Charlie Chaplin's but whose “experience of being loved can be sensed in all the Chaplin films. In spite of hunger, misery, and calamity, there is always room for feelings, for tears, for tenderness, for life.”

Miller says, “the truth won’t allow itself to be silenced completely, even with the help of poetry, philosophy, or mystical experiences. It insists on being heard, like every child whose voice has not been completely destroyed.”

It’s possible these conclusions are too simple in the face of an annoyingly tangled and complex lives. But that doesn’t mean her ideas might not be on to some clues regarding these artworks or that we can’t use this to explore our own ideas and executions, to explore our own childhoods.

Over a year ago, my mother sent me a box of things she had collected from my childhood. Confronting that box was a bit shocking and eye-opening for me. It opened a door to my childhood that is still bearing fruit. And it also has me thinking about the ways in which childhood and young adult events are still shaping my behavior and reflections today.