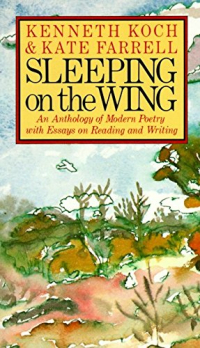 The next essay in the stack is actually the introduction of the book Sleeping on the Wing: An Anthology of Modern Poetry by Kenneth Koch and Kate Farrell. I remember we were assigned this book in a high-school poetry class and the teacher went off on a weird tangent about writing detective screenplays (I think she was having a breakdown) and we never ended up reading it. Then the book was again assigned in a poetry class I took in college and we never read it then either. So I've had this book twice and never read even so much as the introduction of it. And every time I read the title I want to start singing "No Night So Long" with Dionne Warwick, although the lyric is "living on the wind" not "sleeping on the wing." That doesn't seem to matter in the situation.

The material in the intro is pretty basic for advanced poets, but it's probably useful for teachers running poetry intro classes. And then again, sometimes coming back to basic is a good opportunity for a beginner’s mind reset.

And oddly these precepts kind of track to life in general, too. The intro is divided into three sections as follows. My peanut-gallery comments in parenthesis.

I thought this was good, too: “Poets are not big, dark, heavy personages dwelling in clouds of mystery, but people like yourself who are doing what they like to do and do well. Writing poetry isn’t any more mysterious than what a dancer or a singer or a painter does.” 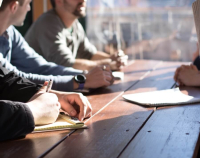 Talking About Poetry with Others

This was good too: “Sometimes because they find poetry difficult and complicated, people make the mistake of talking or writing about it in an abstract, general, overcomplicated way. They think that being abstract and general is more serious and is the way to talk about difficult and important things—that being simple means you’re 'shallow' or uncomplicated or unintelligent. In fact, abstraction is often a way of being evasive…”

Writing Your Own Poems