The Essay Project: Who Owns Art 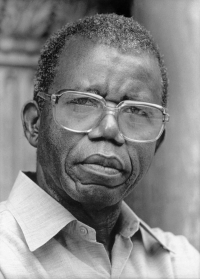 Some days in our Essay class, we'd get two essays in one packet. These two essays by Chinua Achebe come from his book Hopes and Impediments: Selected Essays. Both essays cover Western ideas about individuality, which track nicely to our current conversations and struggles in the Age of Narcissism.

Essay one: “The Writer and His Community”

Achebe  says, “One of the most critical consequences of the transition from oral traditions to written forms of literature is the emergence of individual authorship.” He talks about the physical transformation as well: “…a story that is told has no physical form or solidity, a book has: it is a commodity and can be handled and moved about.”

Igbo artists “are always careful to disclaim all credit for making.” Achebe quotes Herbert Cole as saying, “A former onyemgbe fears that he might slip up and say, ‘Look, I did this figure.” If he [says] that, he has killed himself. The god that owns that work will kill him.”

John Plamenatz is quoted as saying, “The artist ploughs his own furrow, the scholar, even in the privacy of his study, cultivates a common filed.’" Achebe continues, "It has been said that the American Ralph Waldo Emerson was the first to use the word ‘individualism’ in the English language, rather approvingly, as a definition for the way of life which upholds the primacy of the individual.”

“Western man [has] made the foundation of his philosophical edifice, including the existence of God, contingent on his own first person singular!...Perhaps it is the triumphant, breathtaking egocentrism of that declaration that occasionally troubles the non-Western mind.”

The west “prompted the view the view of society and of culture as a prisonhouse from which the individual must escape in order to find space and fulfillment….when people speak glibly of fulfillment they often mean self-gratification, which is easy, short-livid and self-centered. Like drugs, it has to be experienced frequently, preferably in increasing doses.”

“Fulfillment is other-centered, a giving or subduing of the self, perhaps to somebody, perhaps to a cause; in any event to something external to it. Those who have experienced fulfillment all attest to the reality of this otherness.”

It’s interesting to contemplate what this means for our philosophy of living, but this essay is actually asking us to consider our ideas of the self when we write or create art pieces.

“…resulting art is important because it is at the centre of the life of the people and so can fulfill some of that need that first led man to make art: the need to afford himself through his imagination an alternative handle on reality.”

It's true, however, that the Igbo community supports its artists. They won't starve by creating art for the community for free. But I think Achebe is not necessarily talking about support as much as he is referencing the credit we seek or demand, the ego that wants to place yourself into the creation story.

Essay two: “The Igbo World and Its Art”
Igbo African art is “never tranquil, but mobile and active, even aggressive.” Apparently there are no private art collections among Igbo people. Art is always spiritual and public.

Posted at 04:12 PM in Craft, Think Outside the Lament, Whole Life of the Poet | Permalink