Visiting Chicago last month, Monsieur Big Bang and I came upon this museum, noticing it because of a Bob Dylan exhibit advertisement in the window of the building.

The small museum packs a big punch. The Bob Dylan Electric museum was one small hallway but filled with memorabilia, the end of which focused heavily on his Nobel Prize winning. The museum obviously considers him an American Writer, which I was happy to see, because it confirmed my existing, documented bias on the issue.

Related, I really appreciated one massive wall of writers and their genre, to show how inclusive they were in considering the idea of the American writer (from songwriters to book authors to poets to playwrights and speech writers).

The permanent exhibit is a massive display of American writers through history, giving you a really good sweep of American ideology in major periods, from Colonial to present day, each exemplar including a photo or artistic rendering, a sample of their major works, a statement of their importance and maybe a big of trivia, all this supplied on swinging interactive triangular blocks.

There were quite a few poets I didn’t know and I made a list of writers I wanted to check out.

There was also an electronic display on American themes across time. And one entire small sub-exhibit devoted just to the inventions of Edgar Allan Poe.

There was also an amazing electronic board of writing excerpts. The museum called it a Word Waterfall reading “what does it mean to be American?

They had a display on magazines and visitor’s favorite books, a Frederick Douglass exhibit, and two last exhibits where I wasn’t sure when one ended and the other began: The Mind of a Writer and Tools of the Trade (from Typewriters to Touchscreens). I love how contemporary they are! 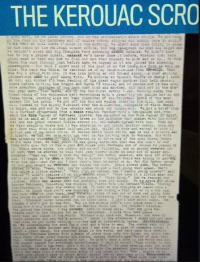 Exhibits included a table of typewriters you could interact with, a display of first lines, an electronic touchscreen version of Jack Kerouac’s scroll manuscript for On the Road.

There was also an exhibit of writerly habits, writer fuel, and advise on how to organize your thinking.

There were also poetry computer games! One where you would try to figure out missing words from a poem and a word magnet game.

What a fun, interactive museum! My only complaint was the lack of erasers for sale in the gift shop. What writer doesn’t need erasers?

Posted at 12:40 PM in Craft, Lifestyles of Poets, Poets in Action | Permalink