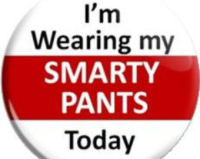 Some people call it Hermioneitis (after Harry Potter), some call it Insufferable Syndrome or Smarty Pants Disease. My grandmother had a family friend from Arizona who came to visit her in St. Louis and her friend was very educated and published in southwestern American Indian culture. He was spouting off his knowledge in her living room and it was very impressive and we were all enraptured and his wife turned to my parents and said, “Isn’t he a smart son of a bitch?”

We love that story and whenever someone sits too high on a horse we say that, "Isn’t he a smart son of a bitch.” It’s very handy because pontificating on some subject or other is addictive. So you always need a wing man near by to disparagingly reprimand you when you’re sounding too much like a smart son of bitch.

I’m full of opinions that I can carry off with a tone of rightness, but honestly I’m wrong I’d estimate about half of the time and the phrase "Did I say that?" is a common pre-apology for thinking too much through my mouth. I take solace in the idea that nobody's reading this anyway, right?

Recently in the magazine The Baffler, Rick Perlstein took all the smarty-pantses to task in his article, "Outsmarted." Some excerpts:

"Even as we moderns spend enormous amounts of our conscious energy making evaluations about who is sophisticated and who is simple, who is well-bred and who is arriviste, and who is smart and who is dumb, these are entirely irrelevant to the only question that ends up mattering: who is decent and who is cruel."

"Whatever 'smart' actually is, it bears absolutely no necessary relation to fundamental decency. But that's a psychological, or even spiritual, lesson, not an intellectual one."

This is the cause for many moments of head-in-the-hands for fellow Hermiones. Many of whom are poets.

And so with that I'm going to complain about this recent online article called "Why All Poems Are Political" by Kathleen Ossip.

I do agree with Ossip that the Poetry is Dead meme is dead itself at this point and out of step with the times. There are more writers if not readers of poetry these days, lots of poetry literacy online, and, as my survey of news stories last year indicated, plenty of news outlets are printing stories about poetry and poets beyond the Poetry is Dead story. Just do a Google search for "poet" every seven days. Society does not only turn to poetry in times of crisis, although in times of crisis it surely ramps up (see the protest poetry phenomenon happening now).

You could say people, for the most part, also only get politically active in times of crisis. So if you believe those two things are related, (poetry and political acts), it shouldn't be a surprise that political poetry gets attention in a crisis.

But I do get tired of the lament that wants to compare poetry to other media. Ossip asks why we don't wonder Does Television Matter or Does Football Matter or Do Restaurants Matter. Does Cable TV Matter is actually a conversation happening as we speak and many people have given up television altogether after asking this very question.  Every football season I have the argument with Monsieur Big Bang: does football matter. I ask the questio, do games matter all the time, especially ones for which we willingly spend billions of dollars. We do have a plethora of TV shows that ask the question do restaurants matter, particular ones with Gordon Ramsey yelling inside them and in general now that we've endured a flood of restaurant and cooking shows and the world falling apart. Do foodies matter? Is there foie gras after fascism? (I just used that for the alliteration. Foie gras is terrible with or without fascism.)

In fewer words, yes these conversations are happening.

Ossip's article then lists a set of un-numbered questions attempting to challenge mainstream ideas about poetry. Ossip points out that poetry can be an antidote to toxic and numbing culture. But some of her questions play into the same assumptions that proponents of Poetry is Dead succumb to, perpetuate the same stereotype of the obscure poet, especially around the issue of difficulty. Difficulty is not a crime, but it is also not a necessary ingredient of poetry. Difficulty is useful for that particular class of difficult poetry. "Can something be pleasurable and difficult." Yes it can, but it can also be easy and pleasurable. Not all poets traffic in difficult poems. Not all poems are difficult. Not even half of all poems are difficult.

And I think, (because here I am over-thinking again), that this favored idea of poetic difficulty ties back to Perlstein's article and our need to come off as smart thinkers outweighs the benefits of our brilliant new ideas.

Am I being melodramatic? Can smart poems kill someone? In local news, police are making pleas to the zillionaire who has hid a fortune of coins in northern New Mexico and presented his clues in a too-cryptic poem. Two people have already died trying to find it.

The poem is too hard. The thirst to understand it is too great.

Posted at 10:07 AM in Poetic Realities, Think Outside the Lament | Permalink