A Book of Lovely Mashups 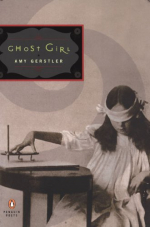 I have a few book reviews that got lost in the shuffle of all the politics last year. This one, Ghost Girl by Amy Gerstler (2004), I picked up at a big book sale in an independent bookstore in Santa Fe. It took me a while to get into because it felt quirky and flat, somehow too translucent to connect with. It’s very possible I was simply learning how to read Amy Gerstler.

By page 18 I had found my sea legs and plenty of poems I liked, including the poem “Fuck You Poem #45” which is a particularly satisfying list poem, (especially considering there might possibly have been 44 previous attempts). The poem “Listen, Listen, Listen” seemed very apropos of our current cultural and political divisiveness. (I wrote that sentence before the election even.) A little sample: “Just the mass of noise and listening to turtles for dear life.” There’s a poem in the voice of the dog called “The New Dog,” which worked better than these poems usually to. There were also poignant poems about death, including “Watch” and “A Widow.”

In the second half of the book, I was checking the title of every poem, my version of a LIKE: “On Wanting to See Ghosts,” “Circus Poster,” “Pastoral Opera Synopsis,” “The Ogre’s Turbulent Adolescence,” (you can figure out the fabulous subjects from these juicy titles). “Domestic” was a great poem about not picking up after someone you love. How great is that?

I loved the full-frontal sexuality of Gersler, (as I did with Amy King). “Ode to Semen” is really good. There are plenty of unrequited love poems here as well. I particularly liked “Swans,” a meditation ending with the line, “These trees can neither run/nor trudge, yet they flower and flower.” “Denial” is great in this vein too, ending with “I write/a poem entitled ‘The History of English Lettuces,’/This isn’t it.”

“Poem That Spills Off the Page” is a list of random answers without questions that actually ends abruptly off the edge of the page in a really satisfying way. These are juxtaposition experiments here too that I like because they have something more connective in them beyond free-association thinking, which feels a bit threadbare at this point.

I look forward to checking out more of Gerstler.