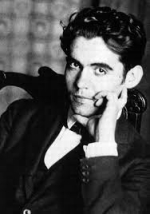 If we're gonna get thru these damn cards we gotta hustle. I tried to step it up this week and do two cards.

Life is no dream! Beware and beware and beware!
We tumble downstairs to eat the damp of the earth
or we climb to the snowy divide with the choir of dead dahlias.
But neither dream nor forgetfulness, is:
brute flesh is. Kisses that tether our mouths
in a mesh of raw veins.

Lovely. This is from “Unsleeping City” by Federico Garcia Lorca (1898-1936), translated by Ben Belitt. Lorca is Andalusian (Southern Spain). The Poet in New York pieces, like this one, are from his year-long visit to New York City in 1929. It was his first time out of Spain and he wasn't so fond of it. The poems were published after his death. He is considered the most revered poet in Spain and he was murdered by fascists.

In the middle of the journey of our life I came to myself within a dark wood where the straight way was lost.

That's it. That's the full quote. It's from what is often referred to as "Dante's Inferno."  It's technically from “The Inferno” portion of The Divine Comedy by Italian poet Dante Allighieri (1265-1321), translated by John D. Sinclair.

Dante's life details are very sketchy but we do know he was forced into exile toward the end of his life due to pissing off Pope Boniface VIII.

Sheesh Boniface. By the way, Georgetown is also offering online classes on Dante's The Divine Comedy (in parts 1, 2 and 3).

Posted at 08:52 AM in Today's Pillar of Poetry | Permalink