Writing in the Age of Information Overload 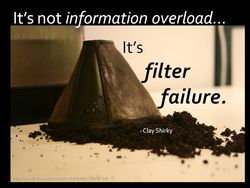 The inability of the human mind to correlate all its contents. Lovecraft actually sees this as a mercy.

A few months ago, a friend of mine sent me this article by K. Dipalo about how to arrange your head-space in an environment of too much information and task overload. We are not built to deal with this much information coming at us in emails, Internet articles, books, TV streams, radio shows, podcasts, apps….

Dipalo recommends mindfulness as a way too offset noise overload:

“Just as the pioneering work of Clifford Nass points out, we are not built to multi-task, forever parsing up our attention into smaller and smaller bits. We are not designed to automatically deal with the surging tide of information around us. What is more like likely to happen is smart people will learn to change their behaviors or devise clever short cuts to maintain focus and, more importantly, a sense of sanity."

In another article by Dipalo, the benefits of  boredom are highlighted:

"Information overload is the red-headed stepchild of the mobile age. We are literally bombarded every day, every hour, every minute with information. Are we smarter, faster and more informed because of all this effort? Not really." (I would argue less informed.) "In 2010, Lexis-Nexis released a global study that found, on average, workers spend slightly half their days receiving and managing information vs. using information to do their work. Sixty-two percent of those surveyed admitted that their work suffered at times because they couldn’t go through the information they receive fast enough. There are even apps available to help people cut down on their fascination with online and mobile information, including, well, their use of apps.

...move to the edge of occasional boredom; just enough to spur some brilliance. Brilliance, by the way, is a form of connection that is pure magic. And pure magic is a good thing for any professional, or any enterprise, to experience."

Singer-songwriter James Taylor seems to agree. In his Oprah Master Class interview of 2015, he maintains that in order to find space to create, you need to hang out in boredom.

“When writing a song, I need quiet,” Taylor says. “I need those three days of boring nothing-happening before I start to hear them.”

Soon, the chords begin to surface and the words begin to swirl. It’s not instantly a complete song, but the elements are there. This is when the quiet is especially important, Taylor explains.

“You get these pieces, and then you’re going to have to sequester yourself somewhere, find a quiet place and start to push them around,” he says.

In Taylor’s opinion, he isn’t the only artist who benefits from this type of isolation in the creative process.

“I think in order to create, artistic people need to be alone,” Taylor says. “They need to have time to themselves. Isolation is key.”

While there is a difference between being alone and being lonely, Taylor says artists shouldn’t fear the latter.

“If you have to be lonely in order to be free, learn how to tolerate a little bit of loneliness,” he says. “It’s hard, but you’re strong. You can do it.” Watch the video. 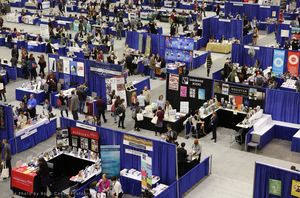 My friend Coolia attended the AWP Conference this spring in Los Angeles. What an awesome location of info-overload as she described it: 500 panels! She sent this satirical article of "AWP events not to miss" which highlights the absurdity.

Think of it: thousands of panelists and thousands of points-of-view. How can you effectively process them? Or not be paralyzed by the choices?

For an academic book on how poets have dealt with information overload historically, pick up “The Poetics of Information Overload: From Gertrude  Stein to Conceptual Writing" by Paul Stephens. He tracks the early origins of poetic digestion going back to World War I.

The fantastically entertaining and poignant twitter blog So Sad Today is another good example from a poet of how we now actually have one-thousand ways of looking at a blackbird. Was 13 enough?

Posted at 09:57 AM in Craft, Poetic Realities, Whole Life of the Poet | Permalink