« What Language Poems Used to Be About: Piet Hein | Main | Food for Writerly Thoughts 2015 »

This is my last week of posts for the year. It will be Christmas parties here on out for me! Here is a final list of poetry news from the Fall and Winter months.

It's easy to poetry this year for Christmas gifts because there are quite a few "best of" lists available.

And if you'd like to hand out free poems of holiday cheer, here are some good resources:

Billy Bragg: 'I got this crazy idea I was a poet' (The Guardian) 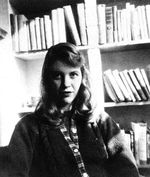 In honor of Sylvia Plath’s birthday, listen to her read a poem about the depressing side of birthdays (The Boston Globe)

Posted at 09:34 AM in Poetry News, Whole Life of the Poet | Permalink