« A Book About Paradox, Surprise and Uncertainty in Poetry Craft | Main | The Death of Books: Domesday-Sayers Wishful Thinking »

I read a big stack of poetry this summer and I wanted to talk about all of them but I’m feeling a bit overwhelmed by the stack. It's so big, actually, that themes stared to emerge. I decided to talk about two or three books at a time in what I’m calling poetry cocktails.

For over a decade I’ve had three women poets in my to-do stack, three women I've always confused with each other because the only thing I knew about them was that they were all commonly referenced by fellow female students at Sarah Lawrence College back in the 1990s. And if we were talking about Louise Glück, I’d always confuse her with Marilyn Hacker who I would always confuse with Maxine Kumin. I had the same face for all of them.

This month I decided to read three of their books and straighten myself out. And wow, these women couldn’t possibly be three more different as poets, women and thinkers. What a treat to unsort this knot. 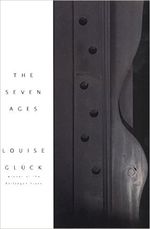 I started with Louise Glück’s 2001 book, The Seven Ages. I think my friend Ann sent me this book almost ten years ago.

As Glück’s professional, elegant photo sessions always show, she is  beautiful, elegant, feminine and very New-York-City-smart looking. Daughter of the X-Acto knife inventor, she attended but did not graduate from both Sarah Lawrence College and Columbia University.

The poems in this book cover frustrated love, betrayal, and childhood. Her poems appear as parables, fables and idea-based lyrics on existence. Her love universe is passionate but frustrated, somewhat withheld. Possession of the earth reoccurs. She’s very direct.

From her poem “Solstice”

“Why should we be forced to remember:
it is in our blood, this knowledge.
Shortness of the days; darkness, coldness in winter.
It is in our blood and bones; it is in our history.
It takes a genius to forget these things.” 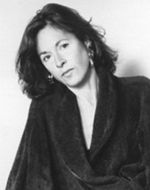 From the poem “Stars”

“Only (softly, fiercely)
the stars shining. Here,
in the room, the bedroom.
Saying I was brave, I resisted,
I set myself on fire."

“And if when I wrote I said only a few words
it was because time always seemed to me short
as though it could only be stripped away
at any moment.” 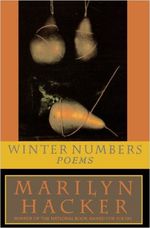 When I looked up Marilyn Hacker, Amazon immediately compared her to Adrienne Rich, I guess because they are both iconic lesbian poets. But I feel I connect with Hacker much more. To me, she seems much more to the point, even if she is talking around the point. I’ve always found Rich to be somewhat impenetrable and obscure. Hacker is from another area of New York City than Glück is, the Bronx not Manhattan. She graduated from NYU and her parents were Jewish immigrants. I have a signed copy of her book, Winter Numbers, from 1994. I was at Sarah Lawrence College at that time so either she visited SLC or I attended one of her NYC readings.

I have to say this: I hated the format of the book (published by Norton). The top margins are too crowded and I felt the font size was too big. it felt claustrophobic. If you look at Hacker’s catalog of books with Norton on Google Images, you’ll see that the covers are all formatted the same way, like old MCA  greatest hits albums of the 1970s. 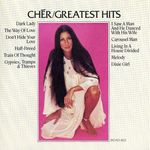 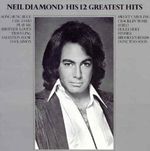 From her poem “Against Elegies”

“For every partisan
there are a million gratuitous
deaths from hunger, all-American
mass murders, small wars,
the old diseases and the new.

Who dies well? The privilege
of asking doesn’t have to do with age.
For most of us
no question what our deaths, our lives, mean.
At the end, Catherine will know what she knew,
and James will, and Melvin,
and I, in no one’s stories, as we are.”

Her poems are full of great rhythms and she excels in writing interesting, unstuffy forms: pantoums,  crowns of sonnets, (I love me some sonnet crowns!), villanelles, crowded couplets. In the 1990s, everyone on the East Coast seemed to be writing travel poems. I heard so many affected travel poems at Sarah Lawrence, I was inspired to spoof them, which was the early impetus for the Mars poems that became my Sarah Lawrence thesis and later book, Why Photographers Commit Suicide. Hacker could easily have been one of those poets. She includes many European travel poems in this book, (a series of “Street Scenes”), and also includes poems about her Jewish heritage and the Holocaust. The final long poem is about her experience with breast cancer, “Cancer Winter.”

“Groves of Academe” is a great poem about her students who don’t read poems.

Hacker's love poems also contain disappointment but less from a perspective of loneliness and reservation. “Letter to a wound” and “Letter on June 15” are great examples. In “Nearly a Valediction” she says:

Her poem’s titles are vaguely porous, academic and unfulfilled. The poems themselves are much more conversational than their stilted titles. This didn’t appear to be happening ironically. 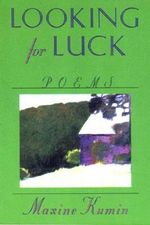 My Maxine Kumin book, Looking for Luck, from 1992 was also inscribed so I must have seen her read too. This was the last book I read of the three and Kumin seemed to exist somewhere between Glück and Hacker. Kumin is also the daughter of Jewish parents like Hacker but attended Catholic grade school. She's a heterosexual poet but nontraditionally feminine like Glück. Kumin spent much of her career in New England and like Hacker, Kumin is deft in the use of forms.

Kumin’s poems offer much more of a tone of greatfulness than the other two. Her topics in this book cover farm critters including horses and rats, gardening and, yes, foreign travel poems, although hers are in Bangkok. In the bulk of the book Kumin takes on the vocabulary of the farm and its many jobs. She also talks about teaching poems to prisoners, nature and  traveling across America.

In another poem about poetry, she says:

“The boggy hollow is dark and perilous,
Sometimes language impedes, sometimes it helps.” “Allegiance to the land is tenderness.
The luck of two good cuttings in this climate.
Now clean down to the alders in the swale,
the fields begin an autumn flush of growth,
the steady work of setting roots, and then
as in a long exhale, go dormant.”

Like Hacker and Glück, her poems don’t finish off in a flourish of wisdom. She’s more practical than even those two lyric plain speakers.

The poem “On Visiting Flannery O’Connor’s Grave” deals with how unceremoniously O’Connor is treated at her grave site.  “The Poet’s Garden” delineates a brief history of American Poetry. The poem “A Brief History of Passion” weaves the love story of her parents with romances happening simultaneously in literary history among D.H. Lawrence, Virginia Woolf, and Rainer Maria Rilke.

Of the three books, I had only read the Kumin's previously and it contained marginalia written in very slight (and retrospectively annoying) pencil marks. Why did I underline what I underlined decades ago. What I chose to highlight recently never did match up to what I was connecting to back then. That marginalia writer seems a stranger to me now. But that stranger was in fact me. Do we even connect at all?