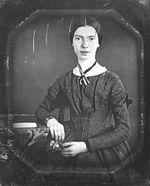 How can poems transform the world? A chat with poet Jane Hirshfield (Washington Post)

Roque Dalton: The Revolutionary Life of a Revolutionary Poet (Roque Dalton, born May 14, 1935, should be seen in the same ranks as Jose Carlos Mariategui and Che Guevara. Like them, Dalton was a seminal figure for Latin American revolutionaries whose life was tragically cut short.  (Telesur TV)

Poet Anastacia Tolbert: 'What To Tell My Sons After Trayvon Martin' (KUOW.org)

Poet Wo Chan uses words to fight oppression (PBS NewsHour)
Wo’s work has recently explored what they describe as “rage” at the power imbalances that exist in the U.S. For Wo, the process of experimenting with language also challenges the systems that create those imbalances.

The author was revealed this week (Rolling Stone) behind the very popular twitter phenom"So Sad Today." Some even speculated the author might be pop star Lana del Rey. It was, however, a poet named Melissa Broder who has published three books of poetry, most recently 2014's Scarecrone.

Posted at 09:08 AM in Poetry News, Poetry Technology, Think Outside the Lament | Permalink