« Movies with Poetry: The Life & Times of Allen Ginsberg | Main | Poems for Hard Times; Poems for New Mexicans; Poems for the Dead » 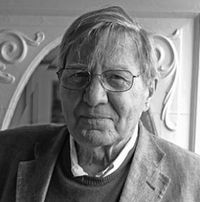 Galway Kinnell has died. His obituaries:

Last summer, for my family reunion in Bandon, Oregon, I took this poem, "On the Oregon Coast," to read during talent show night. I didn't end up reading it as the poem was too long, the crowd was too restless, and the text was slightly political. (Our reunion banned anything political.) I did however give the poem to my mother before the reuinion was over.

BBC America has a new movie about the last days of Dylan Thomas.

I 've been reading the collected poems of Carl Sandburg (the book has 800 freaking pages!) looking for New Mexico poems for a project I'm doing. I found this poem in his book Slabs of the Sunburnt West,  "Tentative (First Model) Definitions of Poetry." It's a list of metaphors for what poetry is. I like some of them like “Poetry is an art practiced with the terribly plastic material of human language" and "Poetry is the tracing of the trajectories of a finite sound to the infinite points of its echoes."

Others are redundant and some make me scratch my head like "Poetry is a packsack of invisible keepsakes" and "Poetry is a shuffling of boxes of illusions buckled with a strap of facts."

I went to see a lecture last month give by the Georgia O’Keeffe Museum called "Miguel Covarrubias: Drawing a Cosmopolitan Line." The talk dealt with his connection to the Alfred Stiglitz circle, how he learned through the making and drawing of maps, about his friendships with Duchamp, Diego Rivera and Andre Breton. The talk defended caricature as abstraction.

Covarrubias did a series for Vanity Fair Magazine called Impossible Interviews. Here's one with Freud and Jean Harlow and another with Sally Rand and Martha Graham. 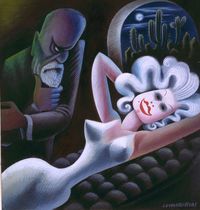 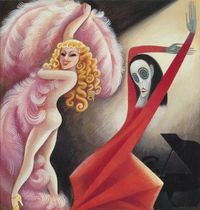 I just found new versions of Impossible Interviews by David Kamp with ones like Russel Brand and Vladamir Putin and Kim Jong-Un with Anthony Bourdain.

Interesting idea for a series of poems.