« A Book About the Oregon Coast; A Book About Affairs, A Book of Fragments About Street Life | Main | Good Lessons in Publishing » 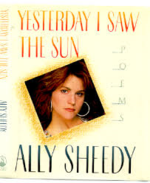 Truthfully, I bought "Yesterday I Saw the Sun" by Ally Sheedy expecting it would be the worst in a bunch of celebrity poets. I was again surprised.

This is actually Ally Sheedy’s second book. When she was a tween, she published a successful children’s book, She Was Nice to Mice. Turns out her mom is a publicist and there's a literary agency in her family, Charlotte Sheedy.

There's also a long list of thank-you’s in the front of the book that includes plenty of brat-pack names from her 1980s-era movie peak.

All that insider stuff aside, this was a pretty raw and interesting book. Sure, there are some cliches employed, including the typical "hanging by a thread," once when we were literally talking about a doll’s eye, later figuratively.

But what Sheedy did well was to capture the gamut of drama in a young teen girl’s life...and not the squeaky-clean kind of teen: all the tears, mysterious love, intense drama of feeling, bulimia, sexuality, loneliness, rehab (that poem even rhymes), imitations, ideals, mother conflict, the murder of a friend, abortion…all the serious teen issues are here.

Talking about friendship with other women in a poem called "A Man’s World" was a  strong moment and the poem "Amends" was clever.

Her search for magical womanliness reminded me of the discussion on Texas Chicana writers in the book  The Desert is No Lady, Chicana writers who have Aztec goddesses at their disposal, a heritage anglo women do not have.

Sheedy also provides snapshots of Hollywood circa the early 1980s, experiences with rock and rollers. Could Paris Hilton have written this at her age. I don’t think so.

Sheedy even rewrites herself. This is a teen's obsession with her coming out into complicated worlds of womanhood and love. And through it, I remembered all my 16/17 year old melodramatic self. This are poems in typical teen languages but what you get is literally a rite of passage in action. I don’t know why we don’t honor this.