A Book About the Oregon Coast; A Book About Affairs, A Book of Fragments About Street Life 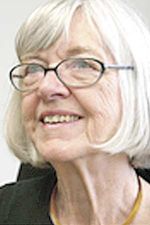 A Mutable Place by Virginia Corrie-Cozart, 2003: I found this book when I was in Oregon for my family reunion, specifically at the town museum in Bandon-by-the-Sea. My mother grew up one town down the coast from Bandon in Port Orford. This book provided exactly what I was looking for, poems about the coastal towns of southern Oregon.

But this book provided many other surprises. Tom Crawford, who I met at the Institute of American Indian Arts two years ago, was listed in her acknowledgements as a mentor. And not only did I get a glimpse of the location which I was looking for, but Corrie-Cozart is my mother's age. So I felt these poems matched my mother's own stories of her pre-teen and teen life: the food, the crafts, the weather, the local birds, the school memories, the pathways childhood takes.

At first I felt some of the poems dissolved into detail lost from any kind of point, but they grew on me. The first sections on childhood seemed like image streams but later sections were more narrative.

Specific poems that reminded me of my mother dealt with piano lessons, leaving the coast for state college, sunlight and cold mornings, the Coquille River, scenes on the beach, young girls on horses, logging trucks, pig tails, blackberries, cribbage, and versions of back-country meandering I imagine my own mother taking. Interestingly Corrie-Cozart leaves the coast of Oregon for one poem where she contemplates southwestern desert landscapes as seen on a jigsaw puzzle she's working on. My mother married and left the coast for the first time to spend 13 years in Albuquerque, New Mexico.

We also find poesm about the big Bandon fire and the Oregon caves. Many of the later poems deal with memory and order. The final section are contemplations on aging, illness and the death of close friends, similar issues my own mother is working through these days.

Another purposes of the blog is to discuss books of poetry in a way that will match readers up with books based on topic areas. For instance, my mother doesn't love poetry. But if ever there was a perfect book of poetry she would likely enjoy as a gift, this is the one.

The Internet has made the world a mess of information. The issue is finding what you need. Poets can find readers if they market their poems by subject.

Mom, if you read this, you know what you're getting for Christmas. 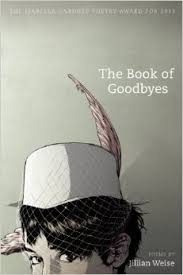 I guess as a bonus, The Poetry Foundation sent me this book recently, The Book of Goodbyes, by Jillian Weise. This book won their James Laughlin Award last year. And I loved it too.

Honestly, I feel like I’ve been on a run of very good books lately. Even the poetry ones. Is my mind more open?  Because I start out very skeptically with them all.

Like the others, I wasn't impressed with the first poems in this book; but then I caught on to some cryptic but sinewy connections floating through them that were quietly compelling.  In a minor way, this is a book about Weise's disability. But more so, this is a book about the end of an affair.

Weiss takes a Joni-Mitchell-like "both Sides Now" approach to studying this illicit affair. All the while I was reminded of the One Story Magazine short story I received last month called "Meteorologist Dave Santana" by Diane Cook. Both pieces were snapshots of 'the other woman' or the woman trying to become 'the other woman' and the struggles for actualization or dissolution of an affair.

The book contains alluring and modern titles like “Decent Recipe for Tilapia.” In it's survey of bad relationships, the book reminded me also of Lisa D. Chavez and yet it didn't contain quite a likewise white girl’s rage against Chavez's Chicana-rage, but the poems are raw in their own way.

I loved the long poem sequence about finches.  I found the section titles unoriginal. We could have dispensed with them. This book also threads in some pop-culture lite, taking on things like Skype. This book was like 50 shades of goodbye to an affair with some bonus material, like the ingenious poem about the politics of being a disabled poet via overheard criticism.

This book, the Walt Whitman Award winning book, was part of my membership upgrade. This 2013 winner was Chris Hosea with Put Your Hands In. John Ashbery picked the book so you know it’s gonna be languagy. In fact, Ashbery’s comments on the back invoke the Armory Show and the avant-garde.

I love Ashbery. I truly do. But the Armory show was in 1913. It’s officially 100 years old and we continually invoke it like it can still qualify as avant-garde. News flash: it can’t. It’s so far from being modern you want to smack something.

That said, I didn’t hate this book. It even started with a great quote by Paul Blackburn: “The dirty window gives me back my face.” I get that.

For me, language poems and their techniques only work for so long  before I want to start seeing a through line. Drifting in the gaps is only a condition I want to be in temporarily before I get bored with reading a list of fragments compiled. But Hosea's poems usually end with a kind of semi-glue like his chaos wants to settle by the end. There are 11 pieces of writing around family, a somewhat form that seems like an attractive practice. The poems about being gay have impressive energy.

This is also not a suburban book. His streets are full  of drugs, fucks, motels and the homeless.

I loved the poem "All You Can" (about eating) and loved his "Poetry is the cruelest month" cleverness in “The Great Uncle Dead” and any commentary he had to say about poetry, such as in "New Make:"

I also liked the end of section 5 of "Songs for a Country Drive:"

...otherwise pull
the safety blanket
over your head and say some
smart words about
the last ten books you read

I feel Hosea tells us the whole point of his languagist adventures in the last lines of his book
ending section 6 of the same poem with:

Posted at 04:24 PM in Books to Read, Poems on Mars Project | Permalink