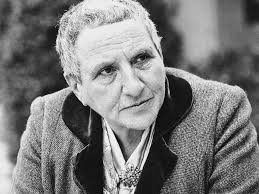 Is it me or is Gertrude Stein the doppelganger of Spencer Tracy? 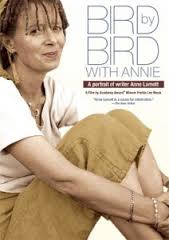 Last few weekends I spent a lot of time with movies and TV dealing with writers and poets.

Bird By Bird with Annie Lamott (1999) is a great documentary, whether or not you've read the book Bird by Bird. Like the book, the joys of this movie experience are indescribable. Lamott is a generous and smart teacher and this movie captures her unique and painful life story.

The DVD even includes a full lecture from a writing festival and is packed with good advice.

I continue to be inspired by her and her way of conceptualizing the work of writing. 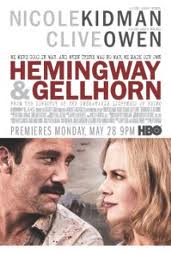 Monsieur Big Bang is always distressed to witness our never-ending fascination with the pig-tempered Ernest Hemmingway. So I had to watch this movie alone. This even though we both loved the book A Moveable Feast because we stayed in the neighborhood of Paris in 2007 where the events took place.  We each even bought our own copy. I also enjoyed the novel about the same relationship, The Paris Wife by Paula McLain.

Hemmingway is always good for some controversial declarations about writers. Clive Owen does a good job with him. They even show many scenes of Hemmingway typing his novels and reports from Spain standing instead of sitting. He gives Gelhorn advice like “sit down at your typewriter and bleed” and “get in the ring and throw some punches for what you believe in.” and “the best writers are liars” and “there are no sides; there’s only the past and the future.”

One of my new favorite shows is USA's Playing House. The show is billed as similar to the movie Bridesmaids. Like the movie, the show portrays the complicated relationship between best girlfriends. Unlike the movie, these girls are former "mean girls" making amends in their adult lives.

The episode "Unfinished Business," (watch the full episode at: http://www.hulu.com/watch/632109#i0,p0,d0), has some very funny scenes around poets and poetry.

One of the girls is having issues with her mother, played by Jane Kaczmarek. She finds out her mom has been giving poetry readings and she attends one at the local bookstore. The audience gives "snaps for the creators" instead of applause.  The mother reads her poetry under the pseudonym of Phylicia Rashad without knowing this is the name of the actress from The Cosby Show.

She's given the introduction that she makes "William Butler Yeats sound like a bent-over simpleton." Her reading of "Chinese Dumpling That Has Left the Bowl" is hilariously dramatic. In retaliation her daughter joins the poetry workshop under the name of  Tempestt Bledsoe and gives her own slam-delievered response poem. One workshop attendee comments that her "delivery stole focus from her words" and we see how hard it is for her to hear criticisms.

In the final scene, their workshop leader reads a poem under the name of Malcolm-Jamal warner. He gives a German-experimental/slam reading for the two girlfriends. He declares, "It’s not done" when one of them tries to snap too early. She says she'd rather eat a man eating another man’s face off than endure any more of the experimental poetry. 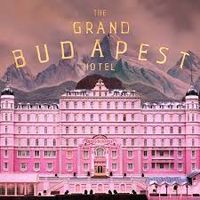 The hotel's concierge is played by Ralph Fiennes and the character loves romantic-era poetry and recites it throughout the film. He even bequeaths his collection of books to his protégée. Although he’s a typically quirky Wes Anderson character, he and his protégée are the films unquestionable heroes and reciting poetry for them is part of their hilarious and heroic journey.

There's already a website dedicated to how poetry is used in the film. It's called "What Wes Anderson's Grand Budapest Hotel can teach us about poetry: http://ricochetmag.wordpress.com/2014/04/16/wes-anderson-poetry/

It’s how Anderson uses poetry in this film that tells us something about how poetry functions...Incidentally, all of the poems in the film – which are admittedly parodic, though often quite arresting – were scripted by Anderson himself.

Early in the film, Monsieur Gustave H. (Ralph Fiennes) – concierge of the Grand Budapest Hotel – catalogues his meager possessions: “a set of ivory-backed hair brushes and my library of romantic poetry”. In fact, the library of romantic poetry is so dear to him that he seems to have committed the whole lot to memory, and takes great pleasure indulging in its recital despite it often falling on deaf ears and rolled eyes. This part of the film is filled with all the decadence and complacency of any first act – but drama is only around the corner. The function of poetry in these early scenes is fairly simple. Some small event happens and M. Gustave is reminded of a verse, which sets him off wistfully into recital – the way certain grandparents might launch into The Man from Snowy River if you don’t tread lightly. The words don’t seem to have much living meaning for M. Gustave, except that he seems to remember a time when they did, and revisits them for nostalgia’s sake.

But soon – and without giving anything away – M. Gustave and his lobby boy, Zero (Tony Revolori), are thrust (as you might expect) into a plot. And here M. Gustave’s poetry begins to serve a different function. As the characters progress through a series of escalating plot arcs, certain lines from his favourite poems surface. In brief moments of introspective calm, M. Gustave takes stock of his dire situation, is reminded of a verse, and begins again to recite out loud. However, the lines are now delivered with more intensity. The relationship between the on-screen drama and the words is palpable. Some cataclysmic event, an injustice or an act of violence, brings these words to mind, and he recites them not with a sense of nostalgia, but in total awe. This is the film’s first lesson in poetics: poems are things that make order out of chaos. They are a way of making sense. A poem read in slippers is not the same as when recited on the permafrost of some desolate wasteland. A poem read in the bath is not the same as one recalled in the face of injustice, brutality or war.

These moments of epiphany don’t last long. M. Gustave is doomed never to finish a poem because every time he pauses to reflect on the events that have led him to some brief moment of respite, some other catastrophe catches up with the pair, and the frenzied pace of the adventure resumes. The very act of pausing to make room for poetry allows the plot to catch up with its protagonists, and thrusts them back into the fray. This device is used to such great effect that the introduction of poetry into a scene takes on a role usually fulfilled by foreboding music – the audience learns that poetry spells trouble. This is the second lesson: poems are words so precisely chosen that they can provoke the hand of fate. Poems dare events to happen. In giving shape to past experience, they also disrupt the flow of future events, or at least the way they are perceived and the way we react to this perception. They are epochal in the truest sense of the word, and also transitory. And this provides us also with the third and final lesson: that poems are as relevant today as they ever were. Reflecting on M. Gustave, Zero as an old man describes him as being from a time that was over before he was born – the imputation being that Gustave’s world of poems and words and ivory-backed hair brushes was anachronistic even in the first half of the twentieth century. But these words shouldn’t be taken at face value, because  here we are, talking about Wes Anderson’s use of poetry as a diegetic film device. The function of poetry is always changing, always finding new ways to filter experience. I don’t think anyone has used it quite like this before.