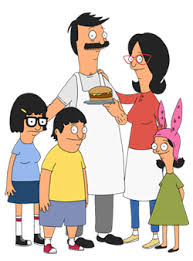 Louise (in rabbit ears, left) runs away from the dentist office and seeks refuge at Aunt Gall (played by Megan Mullally). Her mother hopes Aunt Gall will drive them nuts (and thus home) with her invented board games and poetry readings.

The nerdy aunt wears a fanny pack all day among other idiosyncrasies and her boobs hang down to her waist (see below).

On the show she reads the following poems:

Happy Things We Should Send Into Space

Little cat, you’re just like me
you go outside and squat to pee

Louise then asks to read the rest of her poems in private so she won't disturb any one when she says, 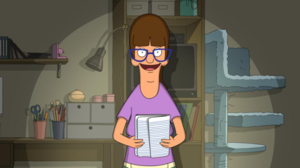 They're making fun of poetry readings. And it was a great episode.