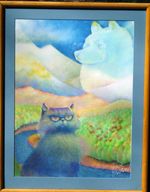 Because last year Cher was mired in an interview scandal over comments she made about Miley Cyrus' controversial performance on the Video Music Awards, my friend Christopher, fellow-poet and pop-culture aficionado, sent me an editorial on the topic by controversial critic and pop-culture academic, Camille Paglia. I blogged about it yesterday on I Found Some Blog. I don't always agree with Paglia (politically) but I felt her comments hit a target about Miley Cyrus and the vapid sexuality of pop performances today, not to mention the corresponding vapid rebelliousness of the avant garde's stunt art...

"...the real scandal was how atrocious Cyrus' performance was in artistic terms. She was clumsy, flat-footed, and cringingly unsexy, and effect heightened by her manic grin.

How could American pop have gotten this bad? Sex has been a crucial component of the entertainment industry since the seductive vamps of silent film and the bawdy big mamas of roadhouse blues. Elvis Presley, James Brown and Mick Jagger brought sizzling heat to rock, soul and funk music, which in turn spawned the controversial raw explicitness of urban hip-hop.

The Cyrus fiasco, however, is symptomatic of the still heavy influence of Madonna, who sprang to world fame in the 1980s with sophisticated videos that were suffused with a daring European art-film eroticism and that were arguably among the best artworks of the decade. Madonna’s provocations were smolderingly sexy because she had a good Catholic girl’s keen sense of transgression. Subversion requires limits to violate.

Pop is suffering from the same malady as the art world, which is stuck on the tired old rubric that shock automatically confers value. But those once powerful avant-garde gestures have lost their relevance in our diffuse and technology-saturated era, when there is no longer an ossified high-culture establishment to rebel against. On the contrary, the fine arts are alarmingly distant or marginal to most young people today.

Pop is an artistic tradition that deserves as much respect as any other. Its lineage stretches back to 17th century Appalachian folk songs and African-American blues, all of which can still be heard vibrating in the lyrics and chord structure of contemporary music. But our most visible young performers, consumed with packaging and attitude, seem to have little sense of that thrilling continuity and therefore no confidence in how it can define and sustain their artistic identities over the course of a career.

What was perhaps most embarrassing about Miley Cyrus’ dismal gig was its cutesy toys — a giant teddy bear from which she popped to cavort with a dance troupe in fuzzy bear drag. Intended to satirize her Disney past, it signaled instead the childishness of Cyrus’ notion of sexuality, which has become simply a cartoonish gimmick to disguise a lack of professional focus. Sex isn’t just exposed flesh and crude gestures. The greatest performers, like Madonna in a canonical video such as “Vogue,” know how to use suggestion and mystery to project the magic of sexual allure. Miley, go back to school!

After taking my MOOC class on contemporary poetry last year (which I loved, by the way), I think there is room to pause at this statement, "avant-garde gestures have lost their relevance in our diffuse and technology-saturated era, when there is no longer an ossified high-culture establishment to rebel against." After all, even Madonna needed a church to subvert against. Avant guarde artists have run the irritant gamut. And I think this is why it feels like rebelling when we take up kitsch and bad art, hence the popularity of MOBA, the Museum of Bad Art in Boston.

Don't get me wrong, I love MOBA on many levels: ironically (the whole museum is ironic) and literally (I have a soft spot for participatory attempts beyond one's skill). More on this later, but I do believe we can actually conflate gestures of loving something both ironically and literally. One level I don't love MOBA on is the level of the rebellious, avant-garde. To me that reads like a cynical, take-over gesture by artists who have run out of any other ideas. It's like robbing the innocents of their playroom in order to fashion your own school of thought. This wouldn't necessarily include language poets,  Dada poets, John Cage-inspired poetics or found poetics (which are healthy experiments, I think), but might include any overt celebration of the bad as a suspicously rebellious way to question value-systems. It's not fair to those who spend hours crafting and its not fair to those who are beginners. It's bad karma and it's a dead end.