A Book About Fathers 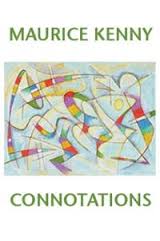 While I was working at the Institute of American Indian Arts, I would occassionally come across copies of a book by Maurice Kenny called Connotations all around campus. Last week I finally finished one of the multiple copies found in my own office.

The poems in the book are primarily about Kenny's father but also stories farther back into his ancestry, stories of his childhood and how his experiences then concern him now as he faces a future idea of his death.

The first section contains musings on paintings of male nudes. I found this section to be a bit repetitive and vague.

The poems in the second section are much more particular and literal vs. figurative (we leave that to the first section...pun intended.). I didn’t really love these poems either at first but they have stuck with me. They depict his complicated relationship with his father and they work to give you a cumulative sort of rendering of his father that is strong in the sum of its parts (which are the individual poems).

The poem “Strange Love” about his sisters reconciliation with her father during a Christmas exchange of presents is indicative of the section's theme:

“His protection beat scars/on her legs and arms.”

The poem “Complicated” does this as well:

His knife drew blood/that his hand wiped off.”

Kenny struggles to understand his father who both protects and harms in visceral ways. You can take the whole of this book as a metaphor for the struggles many have dealing with parents who also harm on their way to help.