A Book About the 99 Percent 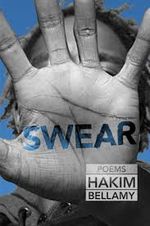 I recently purchased a book by the Albuquerque Poet Laureate and slam poet champion, Hakim Bellamy.

Hakim also touches on issues in New Mexcio, the struggles of Genearation Y, the education system that fails poor kids. There's intimate heartache in his poems about poverty.

I have a degree
in sociology
and survival
and only one
is coming in handy.

Bellamy is great with a calm, angry diatribe and his poems have forceful endings. And is as much a comment on America as  "McDonald's apple pies."