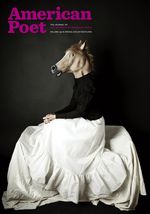 I enjoyed this season's American Poet issue (from The Academy of American Poets) much more than last issue. The articles were less dense and obtuse. Carl Phillips does a great explication of Frank O'Hara's poem "To The Harbormaster." Jane Hirshfield reviews the new book Black Aperture by Matt Rasmussen (who won The Walt Whitman Award). I like the poems she excerpted about grief and gun violence, especially "Trajectory" ("After spiraling twice/it exits the barrel") and "Chekhov's Gun" ("Nothing ever absolutely has to happen. The gun/doesn't have to be fired").

I usually like David Wojahn poems and the ones in here don't disappoint. Mark Doty talks about Brenda Hillman's poetry. Mark Doty never disappoints either. Edward Hirsh talks about Gary Snyder. I like his poem "As for Poets." Like the last issue, I love the Manuscript Study feature, this one focusing on May Swenson's "The Question." Wow, what a revision there.  There are some new books out that look interesting to get: The Collected Poems of Ai, Anne Carson has a new book, red doc>, and Susan Wheeler's Meme looks good. I hated the send-up gravitas of the cover when I first got it, but something about it has stuck is my paw and I keep looking at it. 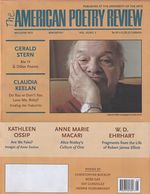 Gerald Stern is on the cover of the latest American Poetry Review. Another chance to figure him out. Another failure. His "companion" Anne Marie Macari also has a review in the issue. Anne Marie was in my class with Jean Valentine at Sarah Lawrence. I sat next to her a few times. She was newly divorced, she told me. Soon after I graduated, it was rumored she had "hooked-up" with Gerald Stern. Gossip, gossip. So it's interesting they're in this issue together. Another one of my classmates, Ross Gay (in my class with David Rivard) has poems in this issue as well. Now Ross I remember better. I had a crush on him. And that was my only crush at Sarah Lawrence. But I never got to know him. He seemed very private.

I like Jennifer Militello's poems "Corrosion Therapy" and "Criminal How-To." Kathleen Ossip does an interesting light piece on Anne Sexton. I like Charlotte Matthews' "Patron Saint of the Convenience Store" and "The End of Make Believe." There's a huge excerpt on Trobairitz (female Troubadour) poetry from around the 13th century. I felt I should have liked this more than I did. It teetered on having some feminist interest for me but I just couldn't get into it. I felt the same way about Ray Gonzalez's "Crossing New Mexico with Weldon Kees" series of poems. After all, I am in New Mexico now. I should get all the references.  What blew my socks off was the poem "Woman and Dogs" by Adam Scheffler. Like I loved it enough to pin up.Here's how it begins,

My girlfriend's dog is small and fat and neurotic
and smells at night like an African meat flower.
It loves her more than some people love anyone
in a riddle of love it worries at, lying there on the floor.

Also liked James Galvin's "Simon Says," and "Long Distance" and Kettje Kuipers' "A Beautiful Night for the Rodeo." Although I enjoyed it, I have no idea why that article on TV cars was in there, except to point out the American-ness of cars. I liked that long Christopher Buckley poem and Alex Lemon's "The Righteous Man is an Advocate of All Creatures." I felt the poems were stronger than the essays this issue. 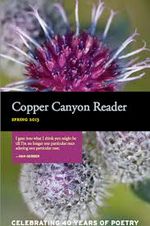 The Spring 2013 Copper Canyon Reader also came to my mailbox this month. Merwin's book of Selected Translations seems interesting in light of all the translations we read and discussed in the Nobel Prize winning poets class I just finished.  There wasn't as much that appealed to me in this issue, which is unusual. I liked Michael McGriff's excerpt from his poem "My Family History as Explained By the South Fork of the River." I also liked Robert Bringhurst's "A Quadratic Equation" and David Wagoner's "A Brief History," an ars poetica:

without knowing what it was waiting for
in places where it didn't belong,
how it broke down, how
but not why it made marks again
and again on pieces of paper.

I'm a sucker for quote-books, so I'm sure I'll buy Dennis O'Driscoll's book Quote Poet Unquote. From the excerpts,

Poems are never made out of 100% good will and good tidings. There is always a little cold wind in a good poem. -- George Szirtes

Posted at 11:01 AM in Poetry News, Whole Life of the Poet | Permalink