When I was at Sarah Lawrence in the mid 1990s, everyone was all agog over international poets, especially ones who had written poems about New York, like Federico Garcia Lorca. I was still trying to catch up on all my homeboys and girls and so felt I was very far behind in all things literary.

But the truth is you are never far behind where ever you are. Each is on their own path, having reading experiences precisely when they should. It's not just about what you read, it's about how you respond to what you read.

Forget about what everyone else is reading. Better still, ignore what everyone else says you should be reading. Don't ignore quality suggestions that suit your interests; these can be very valuable and life-changing. Ignore any recommendation made in the spirit of condescension. And like Gandalf says, when you're lost just follow your nose. 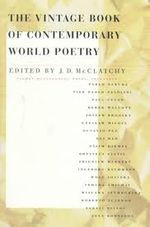 I like how the book is organized. You get a handful of poems (4-8) on a very large array of poets taken from each geographical area. You also get a half-page synopsis on each poet before you read their poems. I used this book to identify the international poets I wanted to explore further, searching for their selected works on Amazon. In some cases, only used copies were available. In other cases, their works have disappeared altogether and their books are languishing in my Amazon Wish List.

I discovered much about my taste in cultural poetries. For instance, I loved most of the Spanish/Portuguese-speaking poets, Sophia De Mello Breyner (Portugal), Eugenio De Andrade (Portugal; I was disappointed in his selected poems), Angel Gonzalez (Spain), Roberto Juarroz (Argentina) and Maria Elena Cruz Varela (Cuba). I think I liked their gritty earthiness, their almost-Catholic connections between blood and the soul, their willingness to linger over elements of the body. In totality, I didn't much like French poets (too chilly and cerebral) but I'm beginning to warm to them. I liked Italian poet Patrizia Cavalli, German poet Hans Magnus Enzensberger (who I'm reading now). I tended to like the Eastern European poets like Polish poets Tadeusz Rozewicz and Wisława Szymborska, Czech poet Miroslav Holub (whose selected works became one of my favorite reads this year), Serbian poet Vasko Popa, Yugoslavian poet Novica Tadic, Romanian poet Paul Celan. I didn't like any of the Russian poets.

I was mixed on Middle Eastern and African poets. I liked Turkish poet Nazim Hikmet and Israeli poet Dahlia Ravikovitch (whose book The Window I read but can't remember much about). I loved, loved, loved Taslima Nasrin (Bangladesh) and her book The Game in Reverse.  I also liked Indian poet A.K. Ramanujan.

I came to enjoy Chinese, Japanese and Southeast Asian poets later on in my life when I was researching Buddhist poems. But from this book I only picked out Japanese poet Ryuichi Tamura to pursue.

Overall, this anthology was good for sampling a large amount of international poets quickly. 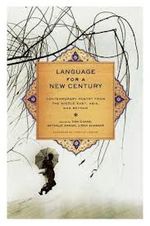 Language for a New Century, Contemporary Poetry from The Middle East, Asia and Beyond (2008), edited by Tina Chang, Nathalie Handal and Ravi Shankar, a book I picked up in Santa Monica years ago, is an entirely different project. The poems are organized in subject groups (childhood poems, experimental poems, political poems, etc.). I wasn't always clear about what subjects the sections represented, even if I had a vague idea. Each section begins with personal essays by each of the editors, all of which were interesting.

Although I did enjoy the poems in the book, there were some issues. The poets were not identified by country, if a poet had multiple poems represented in the anthology they were not presented together, and the poet's biographies were all listed at the end of the book. All of this made locating my favorite poets and pursuing them further a bit of a trail. But this anthology is definitely worth reading to discover some new and exciting poets. Maybe not an  international anthology choice for newbies. The book I recently finished, The Poetry of Our World, An International Anthology of Contemporary Poetry (2000), edited by Jeffery Paine, might be a good starter book on international poetry like the Vintage book. This book includes many helpful historical essays at the beginning of each section, putting the poets in context with world and local events. You get far fewer samples in this book versus the Vintage anthology, but the essays are helpful.

Helen Vendler does the first section on English poetry. I could have done without the inclusion of the U.S. poets who were already familiar to me. As for "international," Vendler includes Philip Larkin (England), Seamus Heaney (Ireland) and Derek Walcott (St. Lucia) who many English-speaking readers may also already be familiar with.

Each geographical section reviews about five poets, although many of the sections have a catch-all chapter at the end with other poets worth pursuing. Carolyn Forché edits the Latin American section.  I was already familiar with Neruda and Octavio Paz (both who I love) but I came away wanting to look more into Jorge Luis Borges (Argentina), César Vallejo (Peru) and Carlos Drummond de Andrade (Brazil).

Kwame Anthony Appiah edits the African section. This was a mixed bag for me, although I did love Nigerian poet Wole Soyinka's poem "Telephone Conversation." I'm trying to figure out what I feel about African poets. They tend to be understandably political and I wonder if something is getting lost in the translations.

For me the Asian section falls apart with too many editors and only one poet selected from each major area: India (still love A.K. Ramanujan), Middle East (one poet for its entirety!), Southeast Asia, China and Japan (liked the Shuntaro Tainkawa poems). Regardless of the dearth of poets represented by country, all the essays (by area) were very illuminating.

The poets picked here are fewer but are the most famous and established of contemporary poets in their countries. So the international anthology you may want to read will depend on your personal taste for amount of poets represented (pick the Vintage book), background information (pick Poetry of our World),  quality poems from some new and undiscovered poets (pick Language for a New Century) or poetry about political persecution by country or international area (pick Against Forgetting).