« New Poll: What Are The Most Important Poetic Themes of Our Age | Main | Miroslav Holub »

As part of my multi-media explorations of the world of poetry, I've searched Netflix and sprinkled my movie que with movies about poets or poetry. I am old fashioned and still get DVDs mailed to me; haven't tried streaming yet . Here are my first three movie reviews of poetry-related movies:

Mr. Big Bang and I actually saw The Raven, starring John Cusack, last year in the the-A-ter. Basically, this movie took some basic facts about Edgar Allan Poe's life and embellished them into a psychological-action thriller, ala the latest Sherlock Holmes fare.

I'm not against this sort of thing by definition (I kind of liked Gothic from 1986), but the results here were disappointing for these reasons:

The pictures below say it all, over the top and heavy handed.

First of all this movie was hard to get a hold of. It was the first and only movie that sat languishing in my Netflix que waiting for all the girls and boys who are obsessed with Leonardo DiCaprio to get their hands on it first in order to see all his naked scenes.

And there's plenty of nudity to go around between DiCaprio who plays Arthur Rimbaud and David Thewlis who plays Paul Verlaine. That's one perk of the movie but other than that you get DiCaprio playing his sullen, cocky and incorigable best (as seen in many other films of his early oeuvre) and Thewlis plays his pathetic, doormat of a mentor. Both are in this 1871 bisexual affair for their own poetic ambitions (only Thewlis falls for good).The movie is full of their gay, ugly tantrum fights.

I will say Thewlis has an extraordinary profile and I found his mugging more interesting than DiCaprio's mugging although both characters became very unappealing very fast. Rimbaud is an attention-whore with a juvenile urge to shock and Verlaine is a veritable p

sychopath who sets his wife's hair on fire for no reason. Worse than that, he can't take a hint.

The movie, like many, glamorizes poetry. However, there are very few scenes of the poets actually talking about poetry (as you know they would be) or writing any of it. At one point Rimbaud has been trying to write (off camera I guess) and he cries out, "It's so difficult!" but then later states soberly, "The writing has changed me."

Verlaine dramatically calls absinthe "the poet's third eye." At one point Rimbuad laments, "The only unbearable thing is that nothing is unbearable." What? Is that a logic puzzle? The movie was supposedly based upon the correspondence between the poets and like most biopics, the narrative is choppy and uneven.

But there were things I did like: the movie covers class issues among poets, something I feel is rarely discussed today. Rimbaud and Verlaine both struggle with money and time. There's a good exchange in this regard between Rimbaud and his mother:

Rimbaud's Mother: This work you do, is it the kind of work that would lead to anything?

Rimbaud (angrily): I don't know. Nevertheless it's the kind of work I do.

Who hasn't had that conversation with their mom? The movie is also about how some people literally consume their mentors and how dangerous that relationship can be.

Rimbaud, when asked to read some of his poems declares, "I never read out my poetry!" In the end, there is professional truth in his monologue about why he gives up writing poetry (he had been mostly full of hot air about it: "I decided to be a genius...I decided to originate the future!") and at the end, he dismisses his mentor as a "lyric poet" and goes off to Africa.

Roger Ebert had this to say, "The poems can be read. The film must stand on its own, apart from the poems, and I'm afraid it doesn't. To write great poems is a gift. To be interesting company is a different gift, which neither Verlaine or Rimbaud exhibits in "Total Eclipse." One admires the energy and inventiveness that Holland, Thewlis and DiCaprio put into the film, but one would prefer to be admiring it from afar." 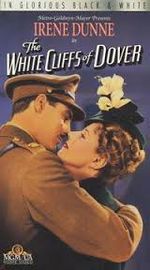 Gee, do I love it when my obsessions converge! On my other blog, I Found Some Blog...by Cher Scholar, I've been tracking Cher's month as co-host of Turner Classic Movies on Friday nights. Cher is a huge fan of classic movies and since 2011 has been dropping by to co-host movie nights on TCM. This month she's been doing a series called It's a Woman's World, powerful female-starring movies of the 30s and 40s. The first Friday was a set of four movies on Motherhood. Last Friday she did a set of war movies, one of which was the movie about an American (Irene Dunne) living in England during World War I and World War II called The White Cliffs of Dover, a movie I've only ever heard of because it was one of Elizabeth Taylor's first movie appearances.

But interesting to us on this blog, the entire film was based on a poem. Imagine that! It's a very long poem (a "verse novel" says Poem Hunter) by Alice Duer Miller called "The White Cliffs." A verse novel. Imagine that! The narration of the film starts out with Irene Dunne reciting the first stanza of Miller's poem and then flips over to poetry written for the film by Robert Nathan. Poetry written for a film! Imagine that! The Los Angeles Times did a story about Robert Nathan when he died in 1985. He had published 50 books of poetry and fiction.

Alice Duer Miller's original poem was influential in many ways. According to Poem Hunter:

The poem was spectacularly successful on both sides of the Atlantic, selling eventually a million copies - an unheard of number for a book of verse. It was broadcast and the story was made into the 1944 film The White Cliffs of Dover, starring Irene Dunne. Like her earlier suffrage poems, it had a significant effect on American public opinion and it was one of the influences leading the United States to enter the War. Sir Walter Layton, who held positions in the Ministries of Supply and Munitions during the Second World War, even brought it to the attention of then-Prime Minister Winston Churchill.

Alice Duer Miller was also influential as a suffragette:

She became known as a campaigner for women's suffrage and published a brilliant series of satirical poems in the New York Tribune. These were published subsequently as Are Women People?. These words became a catchphrase of the suffrage movement. She followed this collection with Women are People! (1917)

The movie is your basic war-time romance/tearjerker about a woman who loses everyone she loves in two wars. I don't particularly like war movies and a weekend watching four of them ("Three Came Home" from 1950 was particulary harrowing) put me into quite a funk. People never learn. None of our laments about war are new, etc. 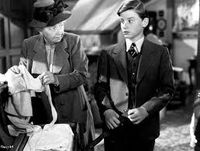 The New York Times recently called the movie "A Cinderalla story in sweet disguise" but I couldn't disagree more. Her life was full of tragedy and lonliness shortly after she married. Had she picked boyfriend number one, she might have had an entirely happier life in America.

At least the movie is good for the appearance of Roddy McDowall who plays the young, charming son.

Posted at 09:55 AM in Poetry Technology, Whole Life of the Poet | Permalink