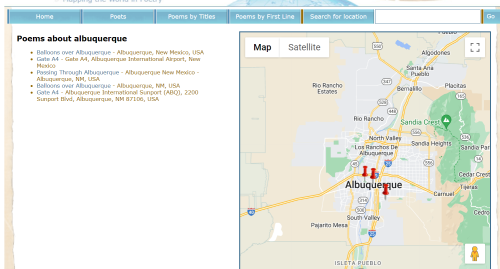 Soo...I was doing something I definitely shouldn’t be doing...and I came across this very cool website called Poetry Atlas. You can look up poems connected to or referencing cities and towns around the world. You just type in the city and you're off to the races: http://www.poetryatlas.com/

This week, I used it to look up poems about the city of my birth.

(An aside, I was the one-hundredth baby born at a white skyscraper hospital in downtown Albuquerque called St. Josephs, which is now a brown medical building called Lovelace. My parents got a steak dinner. My brothers were born across the highway at Presbyterian and there were no steak dinners for them.)

Anyway, two really lovely poems about Albuquerque are on the site. And I think they resonated with me for a few reasons. One is that New Mexico in general and Albuquerque specifically can be a very harsh place to live. Even today. It’s a tough city and it can be a rough place.

A lot of people are drawn to New Mexico for the natural formations and the spirit of the place but it's not for the light of heart. The weather can be harsh. Half of us are allergic to the Chamisa and the juniper pollen. The spring winds can drive you mad (or if you're like my grandmother you can become addicted to them and forever need the sound of a draining wind to fall asleep). Medical care here is absurd. The public schools aren't very good. I guess there are some building codes. And mañana is the motto of the land which you will either learn to love or not.

And I am made of this place. These are my people. And the word love doesn’t quite express my connection to the rocks and trees and mesas and people here. It's really, really foundational for me. But sometimes I wonder if humans were meant to habitate this place.

My big family loves to say wherever they live is "God's country" and my little nuclear family loves to laugh about that. My grandparents and parents and brothers have always believed New Mexico is God's Country. Living far away in St. Louis, that is what we always said to each other. And when I found myself back here about 12 years ago, it dawned on me what that really meant was: 'good lord' and 'for the love of God' and 'for Christ’s sake!"

Sometimes you need poems to remind you what you love about the flawed city and country and world you are from.

And I must say, in reference to the first poem below, Albuquerque's airport is one of its lovliest things here, as airports go.

"Gate A4"
by Naomi Shihab Nye

Wandering around the Albuquerque Airport Terminal, after learning
my flight had been delayed four hours, I heard an announcement:
"If anyone in the vicinity of Gate A-4 understands any Arabic, please
come to the gate immediately."

Well—one pauses these days. Gate A-4 was my own gate. I went there.

An older woman in full traditional Palestinian embroidered dress, just
like my grandma wore, was crumpled to the floor, wailing. "Help,"
said the flight agent. "Talk to her. What is her problem? We
told her the flight was going to be late and she did this."

I stooped to put my arm around the woman and spoke haltingly.
"Shu-dow-a, Shu-bid-uck Habibti? Stani schway, Min fadlick, Shu-bit-
se-wee?" The minute she heard any words she knew, however poorly
used, she stopped crying. She thought the flight had been cancelled
entirely. She needed to be in El Paso for major medical treatment the
next day. I said, "No, we're fine, you'll get there, just later, who is
picking you up? Let's call him."

We called her son, I spoke with him in English. I told him I would
stay with his mother till we got on the plane and ride next to
her. She talked to him. Then we called her other sons just
for the fun of it. Then we called my dad and he and she spoke for a while
in Arabic and found out of course they had ten shared friends. Then I
thought just for the heck of it why not call some Palestinian poets I know
and let them chat with her? This all took up two hours.

She was laughing a lot by then. Telling of her life, patting my knee,
answering questions. She had pulled a sack of homemade mamool
cookies—little powdered sugar crumbly mounds stuffed with dates and
nuts—from her bag—and was offering them to all the women at the gate.
To my amazement, not a single woman declined one. It was like a
sacrament. The traveler from Argentina, the mom from California, the
lovely woman from Laredo—we were all covered with the same powdered
sugar. And smiling. There is no better cookie.

And then the airline broke out free apple juice from huge coolers and two
little girls from our flight ran around serving it and they
were covered with powdered sugar, too. And I noticed my new best friend—
by now we were holding hands—had a potted plant poking out of her bag,
some medicinal thing, with green furry leaves. Such an old country tradi-
tion. Always carry a plant. Always stay rooted to somewhere.

And I looked around that gate of late and weary ones and I thought, This
is the world I want to live in. The shared world. Not a single person in that
gate—once the crying of confusion stopped—seemed apprehensive about
any other person. They took the cookies. I wanted to hug all those other women, too.

This can still happen anywhere. Not everything is lost.

"Passing Through Albuquerque"
by John Balaban

At dusk, by the irrigation ditch
gurgling past backyards near the highway,
locusts raise a maze of calls in cottonwoods.

A Spanish girl in a white party dress
strolls the levee by the muddy water
where her small sister plunks in stones.

Beyond a low adobe wall and a wrecked car
men are pitching horseshoes in a dusty lot.
Someone shouts as he clangs in a ringer.

Big winds buffet in ahead of a storm,
rocking the immense trees and whipping up
clouds of dust, wild leaves, and cottonwool.

In the moment when the locusts pause and the girl
presses her up-fluttering dress to her bony knees
you can hear a banjo, guitar, and fiddle

playing "The Mississippi Sawyer" inside a shack.
Moments like that, you can love this country.

Posted at 10:11 AM in Lifestyles of Poets, Poetry Technology | Permalink