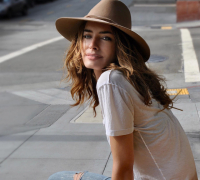 There were two poems that got booted from NaPoWriMo 2022 because of new poems that asserted themselves into the set at the last minute. Below is one of the two.

These two deleted poems were vulnerable for replacement for various reasons, maybe I didn't feel they were finished or they were missing some element or I wasn't really that attached to the song itself (although a feeling of incompleteness surely applies to many of the existing poems too, just not as strongly, including one of the replacement poems that I never was happy with; but that particular song asserted itself somewhat strenuously).

In any case, I was reminded of one of the poems this morning because another song by the artist came up on my android shuffle while I was on the treadmill and I was reminded how much I do like Dana Glover. In this case it was the definitely the poem, not any blasé feeling about the song.

My friend Christopher used to spend hours perusing CD stores in LA to cull out all the cut-outs, discounts and failed attempts. He probably had thousands of them at one point and he gave them (and still gives them) out at Christmas and birthdays with detailed post-it note descriptions of why it was a crime the artist never made it big. I've saved all the post-its completely disassociated from their CDs and they're still pleasant to read like random enthusiasms.

Anyway, Christopher gave me this album (I'm assuming quite inadvertently) right before my wedding, which was not lost on me at the time. We both loved this song and talked about Glover's talents and assets quite a lot back then. My first draft of the poem, due to its theme of being unable to think clearly in the middle of an emotion, is probably what made it difficult for me to critically solve the poem's problems, which today looked like the first two stanzas.

I reworked it this morning. It was in the April 19 slot before getting shown the door by REO Speedwagon.

So Many Thoughts
from “Thinking Over,” Dana Glover

Glover’s inquiring notes climb up my tributaries
like feels. And when I’m feeling, I stall;
I can’t think. The muscle halts.
The machine jams.

And I forget how pretty she is
when her long wail sweeps me up
to its crest. This beautiful girl
who is thinking everything so
dramatically, thoroughly through.

What a lucky turn for her,
this ability to reason through swales
and careening buckles,
ripping out a seasick howl
in the middle of a capsize.

She's like a mermaid
whose heart and mind and soul
are all the same thing.

Posted at 07:58 AM in Poetic Realities, Poets in Action, Whole Life of the Poet | Permalink