« Ellipsis, Joan Didion and Me | Main | The Essay Project: Art Has Taken a Life »

The Essay Project: How Modernism Has Given Us Who We Are 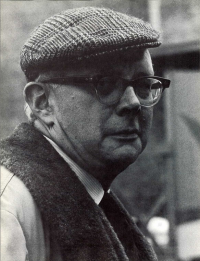 Incredibly this is our 54th essay!

I haven't done an essay in a few weeks because this particular essay took forever to read. Partially this was because I had company coming and I only clean the house before company comes so it took a while to get the house up to my mother's standards even though she's not the company coming.

Then there was the dry, academic essay itself. Then there was the fact that the Sarah Lawrence student who photocopied it from a book back in the early 1990s didn't notice there were unreadable words at the bottom of every page due to their bad copying job. (It was also maddingly stapled so that you have no idea which direction you should be going turning pages). This didn't stop me from reading it, however. It just made me stop after every three pages and take a brain rest.

First I want to say there's always been something that has bothered me about modernism and I've never been able to put my finger on it (its un-scalability??) Although I did (as I was taught to) love many of its practitioners. I've felt this way for as long as I've known what modernism is/was (I think like we're still obsessed with it), going back to college or back to when we read "Prufrock" in high school.

I absolutely cannot read this essay and not think about the vitriol of politics today and how what was once a modernist fringe point of view has become a mainstream way of thinking. So the challenge for today's essay is to read it on two levels: (1) historical modernism and (2) listening for things you've heard people say on Twitter, Facebook or protest rally signs or the crazy Uncle or Aunt narc-splaining at holiday dinners or wherever you hear these basically nihilistic spews.

This is en example of how dry the thing is:"...historical categories are helplessly imprecise and that the unified style or sensibility to which they presumably refer are shot through with contradictions."

Any sentence with contains the phrase "to which they presumably refer" is a little soul crushing. But we slog on! Because we're literary warriors!

Another one, "Historical complexity and confusions are seldom to be overcome by linguistic policing." Who could argue with that? Except the linguistic police. "...the important thing is not to be 'definitive' which by the very nature of things is unlikely, but to keep ideas in motion, the subject alive."

I actually agree with the sentence but I've spent no small time wondering about how 'the nature of things' works.

The whole essay is about the "sensibility" and signs of modernity, which "seems willfully inaccessible" with its "unfamiliar forms" and "subjects that disturb the audience" and "threaten its most cherished statements."

This is what we like about it, it's revolution and irreverence. From 2022, however, we have what I would call 'mercenary modernists.' They don't care about the struggle. They're professional disturbers and threateners. In some cases they've picked a side to work for and they don't even know what the issues of the struggle are. Or in some cases, they're just trying to draw focus back to themselves for purely narcissistic reasons.

This is why we can't have nice, revolutionary things right now. Think about the caricature of the angry white male (or female) in America as you read the rest of this.

"A modernist culture soon learns to respect, even to cherish, sigs of its division. It sees doubt as a form of health."

"It cultivates, in Thomas Mann's phrase, 'a sympathy for the abyss.' It strips man of his systems of belief and his ideal claims, and then proposes the one uniquely modern style of salvation: a salvation by, of, and for the self."

"Subjectivity becomes the typical condition of the modernist outlook. In it's early stages, when it does not trouble to disguise its filial dependence on the romantic poets, modernism declares itself an inflation of the self, a transcendental and orgiastic aggrandizement of matter and event in behalf of personal vitality...freedom, compulsion, caprice."

There you go. He just said it. And then goes on to quote a prediction from Herman Hesse:

"The consequences are extreme: a break-up of the traditional untiy and continuity of Western culture, so that the decorum of its past no longer count for very much in determining its present, and a loosening of those ties that, in one or another way, had bound it to the institutions of society over the centuries."

That doesn't seem all bad though, right? Some of that traditional unity was kind of sexist and racist. But there's that scary law of unintended consequences...

"Culture now goes to war against itself, partly in order to salvage its purpose and the result is that it can no longer present itself with Goethian serenity and wholeness. At one extreme, there is a violent disparagement of culture (the late Rimbaud), and at the other, a quasi-religion of culture (the late Joyce). In much modernist literature, one finds a bitter impatience with the whole apparatus of cognition and limiting assumption of rationality. The mind comes to be seen as the enemy of vital human powers. Culture becomes disenchanted with itself, sick over its endless refinements. There is a hunger to break past the bourgeois proprieties and self-containment of culture, toward a form of absolute personal speech, a literature deprived of ceremony and stripped to revelation. In the work of Thomas Mann, both what is rejected and what is desired are put forward with a high, ironic consciousness: the abandoned ceremony and the corrosive revelation."

I'm getting exhausted reading this.

"But if a major impulse of in modernist literature is a choking nausea before the idea of culture, there is another in which the writer takes upon himself the enormous ambition not to remake the world (by now seen as hopelessly recalcitrant and alien) but to reinvent the terms of reality."

Here we go. We are there. Politicians are doing this as we speak.

"...the Marxist critic Georg Lukacs has charged, "modernism despairs of human history, abandons the idea of a linear historical development, falls back upon notions of a universal condition humane or a rhythm of eternal recurrence, yet within its own realm is committed to ceaseless change, turmoil and recreation."

Ceaseless change, turmoil and recreation. In business-speak this is called 'disruption." It makes me so tired I need to go lay down for 30 minutes.

Ok I'm back. Howe says, "...always the hope for still another breakthrough, always the necessary and prepared for dialectical leap into still another innovation." The "predictable summit...violates the modernist faith in surprise" so "culture must all the more serve as the agent of a life-enhancing turmoil."

And then we have our modernist ideas of the artist, the Genius,

"...declares Hegel in a sentence which thousands of critics, writers and publicists will echo through the years, 'it must be the public that is to blame...the only obligation the artist can have is to follow truth and his genius."

Stick a fork in it.

Modernism, Howe says, is devoted to raising questions, not answers. "We represent ourselves, we establish our authenticity, by the questions we allow to torment us." We embrace uncertainty, "the makeshifts of relativism" because "men should live in discomfort." He quotes Eugene Zamyatin: "Revolution is everywhere and in all things; it is infinite, there is no final revolution, no end to the sequence of integers."

He then lists some basic attributes of modernism:

Ok, so that's all very heavy and depressing. But Howe predicts a kind of vague end to all of it. "How do great cultural movements reach their end? It is a problem our literary historians have not sufficiently examined, perhaps because beginnings are more glamourous."

What will end modernism, Howe says in his closing sentence, is "the kind of savage parody which may indeed be the only fate worse than death."