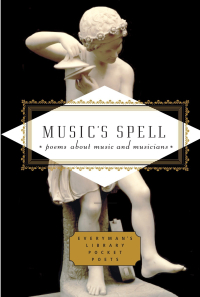 Since I spent the early part of the year writing poems from songs (and really enjoying it) I was interested in what other poets had done with their inspirations and found a few anthologies with music poems in them.

"Music" by Anna Akhmatova whose Lyn Coffin translation ends with:

“And she sang like the first storm heaven gave,
Or as if flowers were having their say.”

"The Flute" by Andre Chenier about a music teacher and the Lloyd Alexander translation ends with:

“With my young fingers in his knowing hands, again
And yet again he guided them until they could,
Of their own will, draw music from a tube of wood.”

"From Fruit-Gathering" by Rabindranath Tagore which ends:

“The flute steals his smile from my friend’s lips
and spreads it over my life.”

"The Tongues of Violins" by Walt Whitman:

From Hamlet by William Shakespeare which ends:

“Call me what instrument you will,
though you can fret me,
yet you cannot play upon me.”

From Walt Whitman's "Proud Music of the Storm" which ends:

Give me to hold all sounds, (I, madly struggling, cry,)
Fill me with all the voices of the universe,
Endow me with their throbbings—Nature's also,
The tempests, waters, winds—operas and chants—marches and dances,
Utter—pour in—for I would take them all.

"The Solitary Reaper" by William Wordsworth that ends:

“The music in my heart I bore,
Long after it was heard no more.”

From "Don Juan" by Lord Byron:

“The devil hath not, in all his quiver’s choice,
An arrow for the heart like a sweet voice.”

And “The Singing Lesson” by David Wagoner which ends:

“If you have learned, with labor and luck, the measures
You were meant to complete,
You may find yourself before an audience
Singing into the light,
Transforming the air you breathe—that malleable wreckage,
That graveyard of shouts,
That inexhaustible pool of chatter and whimpers—
Into deathless music.” 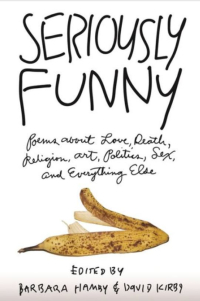 I actually got the idea to look for music poems from another anthology, Seriously Funny, Poems about Love, Death, Religion, Art, Politics, Sex, and Everything Else edited by Barbara Hamby and David Kirby, which Billy Collins recommended in his Masterclass. There was a definite style of poem in this anthology, long-lined narratives at the expense of short, funny pieces. And I'm sure reading a book full of long-lined poems crammed with odd details influenced a recent Rockford Files poem I finished last week. But strangely there were more unfunny poems in the anthology than funny ones, although there were some interesting music poems sprinkled in: 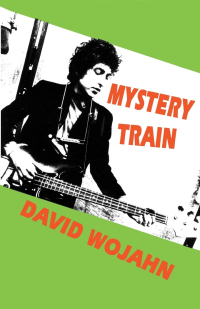 Then there's Mystery Train by David Wojahn with its famous sequence of rock poems. My well-read friend Sherry, seeing I was writing pop-culture poems in graduate school, recommended the book to me when we were both at Sarah Lawrence in the mid-1990s.

The middle sequence contains 35 poems on various rock history milestones: James Brown at the Apollo and on tour, a poem about the car Hank Williams died in, Jerry Lee Lewis’ scandalous marriage to Myra Gale Brown ( I was surprised to relearn her name today since she’s always credited as “underage cousin” even on Jerry Lee Lewis' Wikipedia page and even in this poem she gets no name), Ritchie Valens before his plane crash, the Beatles in Hamburg in 1961, a poem about the song “Surfin’ Bird,” Janis Joplin leaving Port Arthur in 1964, Dick Clark hiding his real age, Elvis shooting the TV while watching Robert Goulet, the last days of Brian Jones by his swimming pool, Altamont, listening to The Rolling Stones and  Creedence Clearwater Revival in Vietnam (and The Doors during the making of Apocalypse Now), John Berryman listening to Robert Johnson, the “Exile on Main Street” Rolling Stones tour, Nixon naming Elvis an Honorary Federal Narcotics Agent, Malcolm McLaren signing the Sex Pistols, Elvis in Las Vegas, drunken bar parodies of Led Zeppelin, Bob Marley's tour, Brian Wilson’s sandbox, Lisa Marie Presley, Bo Diddley, Roy Orbison’s comeback tour, and TNT Colorizing the movie A Hard Day’s Night.

The problem with re-reading all these poems these days is that the subjects seem too obvious now and over-visited. And the poems all sound the same for the most part. There's not much variation in the form, tone or point-of-view. Some exceptions are: 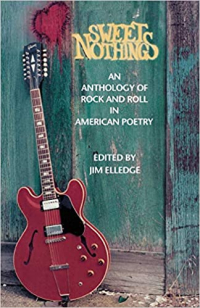 And then lastly, the anthology Sweet Nothings, An Anthology of Rock and Roll in American Poetry edited by Jim Elledge which like the unfunny-funny poetry anthology above it has a lot of poems only tangentially referencing rock songs (and some not even). But there were still some good exceptions:

Larry Levis' "Decrescendo" with the line:

"The man on sax & the other on piano never had to argue
Their point, for their point was time itself"

James Seay's "Johnny B. Goode" with the lines:

"though I could probably write one of those pop-culture essays
on its All-American iconography,
the railroad running through the promise-land"

"is 'Ooo Baby Baby'
still the melting point of ice?"

And I must mention to end, surprisingly none of these anthologies included my favorite music poem, "Serenade" by Billy Collins.

A great piece covering a lot of ground! I recommend 'Fermata' (a musical term) published by Artisan House in Ireland (2016)- an anthology of poems covering a range of music styles. Also my own collection, 'Session' (Salmon Poetry/Ireland) - poems about music in Nature and human interaction, with a focus on Irish Traditional Music.