« Poems About Music | Main | The Essay Project: How Modernism Has Given Us Who We Are »

Ellipsis, Joan Didion and Me 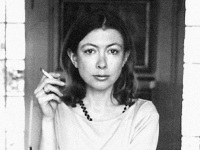 This recent Atlantic article by Caitlin Flanagan, originally entitled "Chasing Joan Didion," was interesting to me in that it was both a fan account as Flanagan visited the places Didion had once lived and, in moments, an illuminating description of what Didion does best.

“This is Joan Didion’s magic trick: She gets us on the side of ‘the past’ and then reveals that she’s fully a creature of the present. The Reagans’ trash compactor is unspeakable, but Jerry Brown’s mattress is irresistible.”

“People from the East often say that Joan Didion explained California to them. Essays have described her as the state’s prophet, its bard, its chronicler. But Didion was a chronicler of white California. Her essays are preoccupied with the social distinctions among three waves of white immigration: the pioneers who arrived in the second half of the 19th century; the Okies, who came in the 1930s; and the engineers and businessmen of the postwar aerospace years, who blighted the state with their fast food and their tract housing and their cultural blank slate.”

Since I am very different from Joan Didion, I often wonder what appeals to me about her. Flanagan is seeking a similar objective in this essay. For me I think one thing is Didion’s hardline, constant re-evaluating of her family history (especially its myths and legends) which, like mine, seems inseparable from her family state’s very history:

“In Slouching Towards Bethlehem, there’s an essay called “Notes From a Native Daughter”—which is how Joan Didion saw herself. It’s generally assumed that she began to grapple with her simplistic view of California history only much later in life, in Where I Was From. But in this first collection, she’s beginning to wonder how much of her sense of California is shaped by history or legend—by stories, not necessarily accurate, that are passed down through the generations.”

And a certain aura around her in the idea of writing being a performance:

“Heading to the seminar that most freighted and engaged her: the writing class of the great Mark Schorer, whom I knew very well when I was growing up. He was a very kind person and also a peerless literary critic, and he found in Didion’s early work evidence not just of a great writer. 'One thinks of the great performers—in ballet, opera, circuses,' he said. 'Miss Didion, it seems to me, is blessed with everything'…

For years it was known as the greatest leaving–New York essay of all time. It’s about the revolving door, the way you can arrive there young, innocent, and new, but the very process of adapting to the city will coarsen and age you.”

And in this famous first line,

“We are here on this island in the middle of the Pacific in lieu of filing for divorce.”

As Flanagan says, “Everyone who loves Joan Didion remembers that sentence—the shock of it, the need to race back up to the top of the essay to see if you’d missed something. ‘I had better tell you where I am, and why,’…When I fell in love with Joan Didion, it was just the two of us and all of those electric sentences, and that was enough.”

Flanagan also talks about how this aspect of performance felt empowering for women:

“She was in Berkeley as a Regents’ Lecturer, and because my father was then the chair of the English department, he was sort of serving as her host. She came to our house for dinner, and she hardly said a word. But a week or so later, when my father said, 'There’s something weird going on with Joan Didion and women,' that got my attention. Apparently, her office hours—usually the most monastic of an academic’s life—were being mobbed. Not just by students; by women from the Bay Area who had heard she was there and just wanted to see her. All of these women felt that Slouching Towards Bethlehem had changed them.

It wasn’t a book that was supposed to change anyone. Not only because that was by no means Joan Didion’s intent, but also because—look at the subjects. How can an essay about Alcatraz (as an attractive, mostly deserted place, not as a statement on either incarceration or the land theft perpetrated against California’s Indian tribes); an essay about a baby’s first birthday party; a forensic investigation of the marital tensions that led Lucille Miller to kill her husband—how can all of those add up to something life-changing?

Because in 1968, here was a book that said that even a troubled woman, or a heartbroken woman, or a frightened woman could be a very powerful person. In “Why I Write”—which was, in fact, the Regents’ Lecture—she famously described writing as an act of aggression, in which a writer takes control of a reader and imposes her own opinions, beliefs, and attitudes on that reader. A woman could be a hostage-taker, and what she held you hostage to were both shocking public events and some of the most interior and delicate thoughts a woman can have. This woman with the vanda orchid in her hair and her frequent states of incapacitation could put almost anyone under her power.”

Flanagan relates this back to her own childhood:

“I had no power growing up, but I did have books and ideas, and I could be funny. I know I could have ended up being a magazine writer without ever having that chance experience. But what Joan Didion taught me was that it didn’t matter that I had such a messy, unenviable life—I could sit down, all alone, and write enough drafts to figure out what I thought about something and then punch it out into the culture.”

Although I'm sure the idea of power through writing would have sounded appealing, there were instead for me very specific rhetorical devices of Didion's style that just seeped into my writing almost unawares, such as her use of ellipses, not just those little three dots at the end of a thought but, as Oxford dictionary defines it, "the omission from speech or writing of a word or words that are superfluous or able to be understood from contextual clues."

Or as others call it, Didion's

In Joan Didion, Sentence and Style, Kathleen M. Vandenberg goes into some detail about the ellipsis thing:

“Writing, Didion notes, is ‘an aggressive, even a hostile act. You can disguise its aggressiveness all you want with veils of subordinate clauses and qualifiers and tentative subjunctives, with ellipses and evasion—with the whole manner of intimating rather than claiming, of alluding, rather than stating.”

In 2005, Didion described her process as “discovering what’s on my mind and then hiding it.”

Why would she do that? There’s a whole chapter on women doing this kind of subterfuge in Stealing the Language: The Emergence of Women's Poetry in America by Alicia Ostriker, a chapter which is all about male/female power dynamics and I’m assuming Didion was caught up in this very thing from her own mythologizing of male power, trying to write around it, and her ideas about her own ‘fragility.’

Vandenberg says as she wrote about politics, “she focused on the use of language as ‘an obscuring device’” and her writing is often about the “rhetoric of gaps” which occurs as a “deliberate withholding of interpretation and commentary at the level of the sentence.” Vanderberg shows examples of connected sentences without and transitional words or phrases in between. And she explains how Didion's various grammatical tricks gives us the impression that Didion’s voice is “both forceful and understated.”

It’s hard to know where our influences come from. As Charles de Gaulle once said, "Don't ask me who's influenced me. A lion is made up of the lambs he's digested, and I've been reading all my life." All I know is I enjoyed reading Didion’s reserve and evasion just as much as I enjoy my own.

But late in her life Didion herself felt it was her writerly evasion that possibly wrote her self. And she tells us this with predictable understatement that is not quite a warning but a matter of fact:

“I developed a sense that meaning itself was resident in the rhythms of words and sentences and paragraphs, a technique for withholding whatever it was I thought or believed behind an increasingly impenetrable polish. The way I write is who I am, or who I have become.”

In any case, I don’t believe writing is all that powerful in that it can forcibly change another's mind like a hostage. Although I do think there is a level of intimacy in making the attempt to change a mind.

Rather, for me, Vanderberg gets to the crux of the truth right here:

“What is withheld, what is omitted, is in many ways more powerful than what is present…her reflections on pivotal moments are inevitably pared down, set in sentences deceptively short and simple given the complexity and weight they are meant to convey”

The unsaid develops a certain power like a vaccuum of air.

Toward the end of the book, Vanderberg quotes the end of Didion's book Blue Nights which deals with the death of her only daughter, a poem-like string of sentences that are full of many typical Didion rhetorical strategies, including ellipsis:

“Go back into the blue.
I myself placed her ashes in the wall.
I myself saw the cathedral doors locked at six.
I know what it is I am now experiencing.
I know what the frailty is. I know what the fear is.
The fear is not for what is lost.
What is lost is already in the wall.
What is lost is already behind locked doors.
The fear is for what is still to be lost.
You may see nothing still to be lost.
Yet there is no day in her life on which I do not see her.”