So plugging along with The New Media Reader. The computer-prediction essays are getting a little bit tiresome but we have a few more to slog through. Some of these predictions of automation now seem a bit sad, especially reading from the tired, old future.

Englebart came up with ideas of the computer mouse, application windows, the idea for the word processor and he helped establish the Internet and video conferencing. He is called "one of the great inventors of the 20th Century."

This paper is about rethinking how we organize information and he talks a lot about note cards, sorting links, concept packets and the serial progression of ideas not being how the human mind really works. Our brains are more of a scrambled, interconnected, linking tangle (aint that the truth). The human mind wanders down paths and crisscrosses itself. Engelbart takes us through how the mind diagrams a sentence or scans complex statements.

He also talks about how hard it is to get people to see how hard-wired they are in  doing things in a certain way. And that changes doesn't come as a big shift, but in lots of little shifts we make. You have to wait to see a big impressive change. He believes the computer can help us "add-up" to something impressive.

This article basically predicts much of what became Photoshop.

"The Construction of Change" by Roy Ascott (1964)
https://www.academia.edu/740569/The_construction_of_change

Acsott was first to use the word cybernetics and this is one of the first essays about new media art. Ascott goes back to the 1960s happenings which he says felt more like taking part in rituals and an interaction that was 1:1.  He sees the participation in new media art differently, as "loops of creative activity...fusion of art, science, personality." He differentiates between the act of making art and the end result and how happenings and new media are both about the act of making more than the end results. This was actually an interesting essay about the curriculum for the art students at the Ealing School of Art and how students were encouraged to experiment even with their self-identified personalities and how this led to thinking outside the self-box.

"A File Structure for the Complex, the Changing and the Intermediate" by Ted Nelson (1965)

Nelson is credited for inventing the idea of hypertext and this essay deals with the changing nature of text, pieces of text in a state of flux, links to ever-changing text and separating the changeable elements out of larger texts so they will always be current. If you were ever an admin in a legal offrce or a paralegal, you might remember the stack of monthly update pages that endlessly needed to be swapped in and out of legal binders. In this way Nelson was predicting micro-content and the buzzworthy "headless CMS."

The Internet as it exists apparently doesn't really do what Nelson envisioned, but is described in this essay as "a monumental public publishing space" which gained critical mass by employing a subset of hypertext concepts.

Nelson sees technology as an "adjunct to creativity...offering a data structure in a changing world."

The essay also informs us that a "small computer" would be a good corporate or educational investment for $37,000. (Yikes!) Nelson then goes into some interesting theories about writing is: outlines, editing, word processing and "handling information."

After this essay, we get into some early experimental pieces, specifially around the French group OuLiPo (pictured above).  and this subsection begins with a great quote from Alan Turing: "Only a machine can appreciate a sonnet written by another machine" which states exactly what I mean by saying people seek out art to communicate with other people and the content of that communication is only interesting to most of us if it has originated from the mind of another human being who might be having the same human experience we are.

But in any case, new media likes to test this premise all the time and a French group of artists formed in 1960 around ideas for creating art with constraints and procedures. The "Brief History of the OuLliPo" by Jean Lescure differentiates between intentional literature and random literature. The OuLiPo were interested in mathematical constraints, failures of language, language games and paintings that involved "the dissimulation of the object of reference."

The first OuLiPo piece we look at is "A Hundred Thousand Billion Poems" by Ramond Queneam (translated from French by Stanely Chapman). The New Media Reader presents the poem as strips of a sonnet and invites you to cut up the pages to recreate physical horizontal page strips which are basically the separate variations of lines of a sonnet. You can swap out various lines in endless combinations to create an almost-infinite number of rhyming sonnets. This took planning to get the various lines to rhyme in French and English.

With breaking voice across the Alps they slog

Lobsters for sale must be our apologue

No need to cart such treasures from the fog

Bard I adore your endless monologue 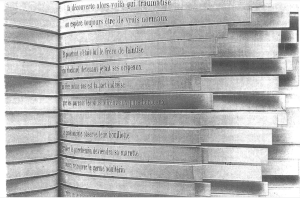 More about the making of the poem: https://en.wikipedia.org/wiki/Hundred_Thousand_Billion_Poems

These experiments are curious and interesting but ultimately senseless and unmoving. No ideas but in structure.

The next piece is maybe the first Choose Your Own Adventure, a piece called "Yours for the Telling" by Raymond Queneau.

There are only 21 pieces of content to read but what was intersting to me were the word choices upon the presentation of the alternative narrative path, for example: if you don't want to follow this path, here is another:

The next essay in the section is "For a Potential Analysis of Combinatory Literature" by Claude Berge. He creates poetry graphs to describe narrative combinations. (The art of data). He groups combinatory literature in three buckets:

He says the first combinatory art forms were musical dice games, some by Mozart. He lists the current players:

The next essay is "Computer and Writer" by Paul Fournel. He talks about how the computer aids in combinatory/random literature (for example it makes the lose strips of 100 million poems easier to read).

He divides machine-aided literature into three buckets too:

Cavino provides an example of a crime story and like most of these experimental computer-based fictions, there's too much exposition at the expense of other important narrative elements (dialogue, character development, place building).

These stories are heavily actions after actions, logistics of choice, subsets of options and random options. Not much thought is given to how motivations and plot are crafted to move a story forward, which makes these stories completely uninteresting.

But that's a problem for another day.