Words as Cogs and Machines

I’m going to take these a few essays at a time now from the New Media Reader.

The first is yet another essay about the affordances of computers and yet more predictions for a utopian age of computers and then we finally get into more obvious literary concerns with two essays from 1961 that begin to show how computer theory and avant-garde literary theory merge.

In the introduction to “Man-Computer Symbiosis” by J. C. R. Licklider (1960) Norbert Wiener (I love the name Norbert) and Katharine Hayles raise issues for humanists around ideas about true subjectivity, paying most attention to the fuzzy border where humans end and machines begin (never more relevant than today with our smartphone addictions). Wiener also shows where New Media projects began, right around World War II with the development of anti-aircraft guns. Computer science then began to study how did humans and machines fit together in cutting-edge weaponry systems and war games.

These technological advances, Wiener says, also intersected with new thinking about the self as an illusion which dovetailed nicely with increasingly-popular Zen Buddhist ideas of the self.

And here is the pivot where the humanist and the engineer come into conflict.

The engineer, not typically steeped in history or  liberal arts, rarely pauses to consider the human consequences beyond the building of a new gadget or tool. Humans do respond as if they in fact have a real self. And this always guarantees my favorite scary boogeyman: unintended consequences. 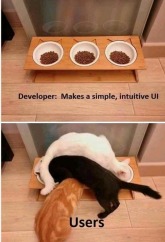 The article alludes to this itself with a reference to “The Monkey Paw" story about magic wishes and unforeseen consequences. Wiener sees a parallel with  computer engineering: handy solutions may bring bigger problems.

This article predates the beginnings of the Internet (APRANET) in October of 1969, but Linklider predicted “men will communicate more effectively through a machine than face to face.” He even predicted cyber-romance. But like other predictors of this era, he completely failed to predict the downsides: cyberstalking, cyber-bullies, conspiracy theory proliferation.

He talks about the “inflexible dependence on predetermined programs” and who in a modern office environment doesn’t twitch at that little string of words?

In the article Licklider dreams of a computer/man symbiosis similar to the insect/tree symbiosis. He sees computers performing both the most repetitive, clerical operations of the human mind and solving more difficult problems with more efficiency and speed than a human brain can manage.

Most interestingly, Licklider does a survey of his own thought process and maintains that 85% of his thinking time is spent “getting into a position to think or decide,” the bulk of his time learning, gathering and researching versus a small amount of time spent actually digesting information and calculating. He says it takes him “seconds to determine.”

He admits, “books are among the most beautifully engineered, and human-engineered, components in existence, and they will continue to be functionally important within the context of man-computer symbiosis.”

The next essay is “’Happenings’ in the New York Scene” by Allan Kaprow (1961). The introduction addresses how audience participation and  interactivity attempted to break down the barriers between creators and their audiences and how this influenced media artworks and menu-driven media seeking non-hierarchical relationships. The introduction also notes an article by Söke Dinkla, “From participation to Interaction,”  where she notes that these kinds of participation happenings often occur along a fragile border and that their efforts were never entirely free of authorial manipulation. I think this is relevant to current, similar multi-media experiments.

Kaprow defines for us what happenings were in the realms of theater, writing, music and painting and he traces the history from of interactive performance from circuses, carnivals, traveling saltimbanques and medieval plays.

Drawing connections to modern media pieces, Kaprow notes that happenings often had no literary point; they might not “go anywhere” or have any beginning, middle or end. Audiences co-mingled with creators who aimed for un-artiness, a more natural habitat and results had a rough, studio-like feel. Pieces were not written but generated in action. Words were materials, structures based on chance techniques.

Kaprow admits that most of the attempts at un-self-consciousness failed and these events felt ironically planned and academic. And all too often, the results were boring.

But admittedly happenings have had a profound influence on new media pieces, like all kinds of chance artworks and writings. But there’s no reason that chance characteristics and interactivity must necessarily define media pieces.

The last essay is “The Cut-Up Method” by William Burroughs (1961) introduced by Brion Gysin. Like happenings, surreal and beat experiments also influenced not only new media projects but computer game theory. Gysin reminds us that initial poetry generators were meant to be an intermediate step for generating a rough draft of content, and that even Burroughs admitted to performing a human edit as he worked toward a final draft. (My boss at ICANN just reminded me this week what an oxymoron the term 'final draft' is and it reminds us how truly final anything really is).

The benefit of such a method for Burroughs was the happy accidents that resulted and Burroughs insisted, “all writing is, in fact, cut ups.” Mentally speaking, this is very true.

Read more about this kind of creative assemblage: "Cut Up: The Creative Technique Used by Burroughs, Dylan, Bowie and Cobain"

Posted at 08:35 AM in Craft, Poetic Realities, Think Outside the Lament | Permalink