Recently I received two books of poetry about movies. The first was a gift called Reel Verse, Poems About Movies, an anthology by Everyman's Library. There are so many good poems in this one and I found quite a few online.

Some of my favorites were poems about racism and segregation in movie theaters: Ellen Byrant Voight's "At the Movie House: Virginia, 1956," a similar poem by Elizabeth Alexander called "Early Cinema," and a very chilling poem about the movie Birth of a Nation called "Meanwhile" by Martha Collins where she traces the damage this infamous 1915 movie did to real people, including an increase in lynchings, torture and the rebirth of the KKK.

Denise Duhamel's great poem "An Unmarried Woman" about the movie of the name and how it's seen viewed through the lens of two young girls: "This was just marriage, we guessed, sipping our frappes."

Amy Gerstler has a great poem called "The Bride Goes Wild" about love and sex that is basically just movie titles strung together. Ron Koertge's "Aubade" is about Bette Davis movies. "Janet Leigh is Afraid of Jazz" is a great Noir poem by Marsha De La O.

Sonia Greenfield does a funny role-reversal in the poem "Celebrity Stalking" where Meryl Streep and George Clooney are stalking the poet for poetry. And Gregory Djanikian's got an empowering poem called "Movie Extras"  and Vijay Seshardri's "Script Meeting" was a tour de force about special effects. Paul Muldoon has poem about young boys accidentally watching a romantic film called "The Weepies" and Carol Muske-Dukes talks about watching her actor-husband get murdered repeatedly in her poem "Unsent Letter #4."

Patricia Spears Jones has some good lines in a poem about the movie Hud (which I haven't even seen):

"Where else can a man be a jerk
and still make a woman's heart ache?

We want more.
More of his cool, patrician inspection
of the very core of our lusting selves.

Oh for a day to be Patricia Neal
warming up her whiskey voice
just so she can tell Paul Newman
where to go and how fast to get there.

There's a whole chapter on auteurs. Highlights are:

I took the term "field of music" for my NaPoWriMo 2022 project from Elena Karina Byrne's "Easy Rider."

Other good ones were David Wojahn's "Buddy Holly Watching Rebel Without a Cause," "At the Film Society" by Stephen Dunn and one of my favorites, "Voice Over" by Geoffrey O'Brien about a tough, fall guy getting his revenge. 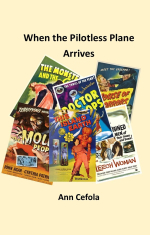 The second book was the new chapbook from Ann Cefola called When the Pilotless Plane Arrives available on Trainwreck Press.

This is an amazing little set of ars poetica poems culled from the material of old movies, like Bette Davis' Now Voyager or the somewhat newer Close Encounters of the Third Kind plus Universal's suite of horror movies. Some of your favorite b-movies might be here: This Island Earth, Dr. Cyclops, The Monster and the Girl aka D.O.A., King Kong Escapes, The Mole People, The Bride of Frankenstein, House of Horrors, The Leech Woman, The Mummy's Hand, Dead Man's Eyes, Calling Dr. Death, House of Frankenstein, The Mummy and The Invisible Man.

Each poem extrapolates a delightful and non-obvious lesson about writing from the serepentine plots of these movies. And that lesson might be four lines or four words.

A longer example from "First Draft in a Drawer" (after Now Voyager, 1942):

....proving an initial
draft needs care, questions asked by a skilled
professional, exposure to revered poets,
the wide Atlantic, salt air, and above all,
proscribed love, to risk its truest self.

"cross out articles, finish off adjectives with a pillow"

In some poems, Cefola addresses the poet directly: "You too, poet" or "poet, you maybe be irritable as that scientist." In the last poem she brings it all together, the connecting fiber between the poet and the scientist gone mad,  in the poem "Propulsion" (after Close Encounters of the Third Kind, 1977):

It's always been this way. A tuning fork for the world. I just.
Want to know. You enter the sparkling city and—know.
You had already been taken long ago.

When you think of how many great poems have been written about old stuff found in museums (Auden, Rilke), it’s natural to think that movies, so rich in images, sound effects and dialogue, would inspire some good poems. I think Gioia comes pretty close with “In Chandler Country” since so much about the noir-ish Chandler novels made it over to the big screen and of course Chandler created Philip Marlowe, played by Bogie, Mitchum, Gould.
https://www.poetryfoundation.org/poems/46412/in-chandler-country

First of all, thank you for sending the great Dana Gioia Raymond Chandler poem. And second, I will be visiting your site all the time now for the Poetry+Pop Music content. I love the top post showing the relationship between sonnets and songs like "All Along the Watchtower," "Fortunate Son," and "Pretty Saro." Good stuff.