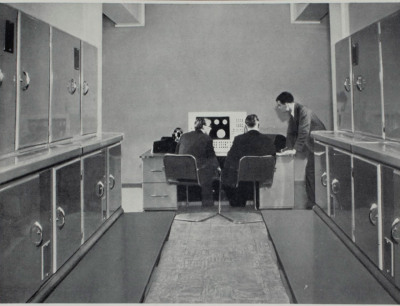 To return back to digital art essays from the New Media Reader, I'll be talking about two predictive pieces next: Vannevar Bush's essay "As We May Think" from 1945 and "Computing Machinery and Intelligence" by Alan Turing from 1950.

Bush's piece is a list of predictions, both hits and misses, but some impressive hits like ideas around wearable informational devices, wireless data connections, machine voice interactions, information storage working like brain cells and e-books. Forefront in his mind was the predicted coming information explosion. His ideas inspired the invention of the computer mouse, the word processer and hypertext.

He wanted to solve the time-consuming lookup problem and make man's "record of ideas" highly searchable. As he said, significant attainments have been lost in a mass of inconsequential, the glut of publications being crippling to researchers. But he probably didn't foresee the glut being so big and growing exponentially bigger as storage systems themselves grew, not only with information but misinformation.

Although Bush didn't predict digital storage systems; he instead imagined storage on film. He also couldn't see beyond a room full of girls keyboard-punching data onto cards. But, most specifically for our purposes, he did predict possibilities for machines beyond numerical calculations. He saw machines manipulating language. And he envisioned an efficient text search much like the Internet parses IP addresses, although he envisioned a clunky "memex" machine instead of the Internet itself. He also dreamed of machines that would work beyond logical files and paths but would operate as the mind operates, by an almost random association via a web of trails (which is pretty much the Internet). 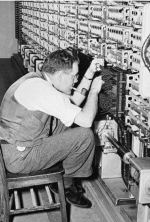 In "Computing Machinery and Intelligence," Alan Turing explains the imitation game (and if you've seen the movie of the same name, you're familiar with Turing's tragic story) and his hopes to test computers with the imitation game in order to answer the question can machines think,  which would become known as The Turing Test. He rephrased the question to can computers fool us into thinking they can think, or can they think at a rudimentary level?

The article follows a very rational path, explaining the imitation game and why it would be good to find out the capabilities of the machine as a way to ask, "what are the physical and intellectual capabilities of man?" He then systematically goes through all the objections, from contemplations of the soul and God, superiority complexes, mathematical limitations, human frailty, infinity and even ESP. In an early question of identity, Turing even wonders if the human mind is like an onion, full of layers but ultimately no core there.

Turing created a random-number generator on the Mark I machine and, in the summer of 1952, Christopher Strachey used that to write the love-letter-generator program in what is now considered the first piece of digital art.

“One of Alan Turing’s final projects was a computer-based, automated love-letter generator, which some have identified as the first known work of new media art. It was programmed by Christopher Strachey in 1952 for the Manchester Mark I computer. Turing maintained this machine, which was fondly known as M.U.C, as a professor at the University of Manchester, and the love letter generator was but one among its many applications. It operated with a template similar to the game of Mad Libs, into which the computer would insert nouns and adjectives of endearment randomly selected from its database."

MY RAPTURE ADORES YOUR FERVOUR. YOU ARE MY PRECIOUS BURNING. MY COVETOUS EAGERNESS TENDERLY LIKES YOUR EAGER SYMPATHY. MY LOVESICK FONDNESS WOOS YOUR SYMPATHY. MY FONDNESS PINES FOR YOUR FELLOW FEELING.

You are my avid fellow feeling. My affection curiously clings to your passionate wish. My liking yearns for your heart. You are my wistful sympathy: my tender liking.

M.U.C. stands for Manchester University Computer. What a sweet talker, that machine!

"As Noah Wardrip-Fruin has suggested, it is interesting that Turing and Strachey were both gay men, and that their first literary collaboration for the computer imagined it as the author of a one-sided epistolary romance. The tangled mash-up of sentimentality bespeaks a twinge of longing beyond the one that already accompanies the genre: one can almost sense M.U.C.’s thirst, as if the computer were struggling to speak from the heart but discovered that its vocabulary had been arbitrarily limited to the language of clichés. Like the wooden puppet in search of the Blue Fairy, the computer longs to be human; like Snow White fleeing into the forest, it longs to be admitted into the company of those who are capable of care and affection.”

According to Stobhan Roberts in The New Yorker, basically 70 base words here could create three hundred billion different letters.

"In choosing to write a program that expressed adoration rather than humor or literary talent, Strachey was perhaps playing the cynic, exposing the mechanical nature of romance. The German artist and theorist David Link, in his book Archaeology of Algorithmic Artefacts, observes ...'ultimately the software is based on a reductionist position vis-à-vis love and its expression,” Link writes. “Love is regarded as a recombinatory procedure with recurring elements.'”

And I need to stop at this point and say Alan Turing has been an important inspiration to me since I first encountered this co-created random love letter generator in the Electronic Literature MOOC from Davidson College. It's not insignificant to me that these two men were closeted gay men (although not in a relationship) and that one of Turing's final projects was contributing to something we can call digital love art. So basically emotion, drama, concealment, longing was baked into the very first digital art. And the idea that machines can aid humans in unpredictable ways.

The algorithm broken down: https://en.wikipedia.org/wiki/Strachey_love_letter_algorithm

Take a spin on a recreated generator: https://www.gingerbeardman.com/loveletter/

Posted at 10:08 AM in Craft, Poems on Mars Project | Permalink