The Essay Project: The Beat Poets 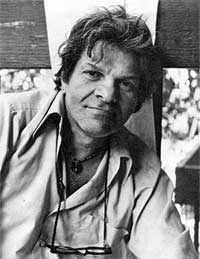 The student who contributed this essay to our class forgot to note the author so I had to look that up, “Variations on a Generation” by Gregory Corso and as far as I can tell it's from The Portable Beat Reader edited by Ann Charters. This is another good example of how an essay could be historical, instead of simply a craft essay or personal opinion about some aspect of poetry.

Corso starts by defining writers who are members of a group as if to say the better talents belong to groups (which would leave out Emily Dickinson among plenty of other excellent loners): “every man works better when he has companions working in the same line, and yielding the stimulus of suggestion, comparison, emulation,” what Corso calls clusters joined by “geological location” or “philosophical sympathies” like the transcendentalists who were joined both geologically and philosophically. His other examples are “local-color realists…born between 1849 and 1851” or “experimental modernists…born in the decade between 1879 and 1888.” These “clusters or constellations” occur in all the arts.

(This might be a good time to note The New Yorker recently had a good article on the drawbacks of thinking in terms of generations...but that's a digression.)

Anyway, we're used to thinking along this generations line so Corso explains F. Scott Fitzgerald’s definition of the Lost Generation, a “reaction against the fathers which seems to occur about three times in a century…distinguished by a set of ideas inherited …from the madmen and the outlaws of the generation before.”

This is a helpful definition, Corso says, when considering the Beats  and their “intricate web of perceptions, judgements, feelings, and aspirations…the shared experience for the Beat writers was historical and political, based on the tumultuous changes of their times.”

He traces the word “beat” in etymological detail, coming out of  Jazz and meaning 'down and out' from 'dead beat' or beat-up or streetwise. The genesis of the word started in 1944 and traveled from Herbert Huncke to William Burroughs to Allen Ginsberg and Jack Kerouac, who saw in the word as a “melancholy sneer” like “solitary Bartlebies” (from Herman Melville’s short story "Bartleby, the Scrivener"), the “archetypical American non-conformist.”

[A generic enough a statement to stick to any rebellious manifesto.]

The term “Beat Generation” was coined in 1948 when bop music writer John Clellon Holmes wrote a piece appreciating the stories of junkies and the new consciousness, furtiveness and the “weariness with all the forms”....and the movement had “the subversive attraction of an image that just might contain a concept, with the added mystery of being hard to define….a vision and not an idea.” Holmes saw Jack Cassidy as the central figure after the publication of his novel Go. Then an article by Gilbert Millstein appeared in 1952 in The New York Times' Sunday Times, which officially launched the term.

Early works of note were:

Kerouac was dubbed the spokesman by this time and in 1958, Esquire Magazine published “The Philosophy of the Beat Generation.”

The Beat poets are often conflated with the San Francisco Renaissance writers but were only associated to them via Allen Ginsberg who had moved from New York to California. The West Coast group was already a community by 1954 and contained a loose group of poets including Kenneth Rexroth, Kenneth Patchen, Robert Duncan, William Everson, Henry Miller, Anaïs Nin, Philip Lamentia, Jack Spicer, Robin Blaser, Weldon Keys and Gary Snyder.

It was at the event "Six Poets at the Six Gallery” in 1955 where the poem "Howl" was unveiled.

According to Michael McClure: “we saw that the art of poetry was essentially dead—killed by war, by academies, by neglect, by lack of love, and by disinterest. We knew we could bring it back to life…We wanted voice and we wanted vision."

The West Coast poets tended to revolve around presses: Unitide Press, Equinox Press, the Pocket Poets Series from Lawrence Ferlinghetti's City Lights Bookstore that published "Howl" which was seized by San Francisco customs officers and the press was charged with “publishing and selling an obscene book. But that just led to national attention and big sales.

Meanwhile, the word Beat came to be associated with the milieux of bop music, drugs, hipsters, the new kids of rock ‘n’ roll and soon it just became synonym for bohemian rebellion. Other terms in early competition were 'hip generation' (Norman Mailer), “the subterraneans” (Allen Ginsberg), “bop generation” (Jack Kerouac). A San Francisco Chronicle columnist coined the word “beatnik” as a condescending term in Look Magazine in 1958 when he referred to the “250 bearded cats.”

There was plenty of criticism for the poets in the US and the UK. Poet George Barker wrote a poem called “Circular from America” where he said, “Mill of no mind…1/2 and idea to a hundred pages….For laboring through/Prose that takes ages/Just to announce/That Gods and Men/Ought all to study/The Book of Zen.”

They were seen as “an amusing phenomenon" in the English magazine X although the UK had its own Kitchen-Sink Writers or “Angry Young Men,” a group that included John Osborne, Colin Wilson, John Wain and John Braine.

Conservatives in the encyclopedia The Americana suggested in 1958 that these writers were simply “self-conscious delinquents, addicted to…jazz, dope and the lunatic fringe of sex and literature, received attention out of all proportion to its significance…”

McClure insisted “at the deepest level that a barrier had been broken, that a human voice and body had been hurled against the harsh wall of America and its supporting armies and naives and academies and institutions and ownership systems and power-support bases.”

In 1958 Jack Kerouac published The Dharma Bums which was based on the poet Gary Snyder’s life and values and which became “a blueprint for hippie culture a decade later.”

“Like the work of the radical writers of the 1930s (but without their specific political agenda), Beat poetry and fiction was an alternative literature by writers who were sweeping in their condemnation of their country’s underlying social, sexual, political, and religious values...Earlier modernist poets like Ezra Pound or Lost Generation writers like Ernest Hemingway had attacked the system from the safeguard of their life abroad as expatriates, but the Beat Generation writers protested their country’s excesses on the front lines.”

William Burroughs understood the threat to conservatives as "much more serious...say, than the Communist party…you can’t tell anybody anything he doesn’t know already. The alienation, the restlessness, the dissatisfaction were already there waiting when Kerouac pointed out the road….Art tells us what we know and don’t know that we know.”

According to Corso, “the Beat Generation did less well for its women. Reflecting the sexism of the times, the women mostly stayed on the sidelines as girlfriends and wives.” This group was more about “male bonding.” It’s experimentation involved what Gregory Corso called, “bop prosody, surreal-real images, jumps, beats, cool measures, long rapid vowels, long long lines, and the main content, soul…the brash assertiveness of the postwar years.”

When I met Julie Wiskirchen at Sarah Lawrence in the mid-1990s, the first thing she invited me to join was a Guggenheim event in Manhattan to see an Allen Ginsberg reading. In my memory Ginsberg sang, "Don't smoke, don't smoke....the government dope. Smoke weed!" But this is the full text of the piece proving my memory is not very good....but in any case Julie and I have been lifelongs every since.

A useful summary. I wonder about the lasting influences, if any, of the Beat writers. Maybe Dylan? Although I would think he tends to take what he needs and move on. But in this short clip of Dylan and Ginsberg visiting Kerouac's grave, it seems Dylan was still within the Beat orbit in 1975:

Oh good question. I would think the Beats generally (and Ginsberg specifically) had a huge influence: (1) beat culture became hippie culture, and then on his own Ginsberg had a big influence on (2) free speech and protest culture, (3) gay rights, (4) drug culture, (5) his Buddhist work at Naropa, and he influenced not only Bob Dylan, but Patti Smith, Paul McCartney (who shows up in one of the Ginsberg documentaries), John Lennon, Jim Morrison, Thomas Pynchon, Robert Pinsky (to name a few writers). I also think for ecology writers, Gary Snyder is a big influence. And William Burroughs (along with the French Surrealists) are still influencing experiments in Language Poetries and New Media pieces.