« Words in the Snow | Main | The Essay Project: The Beat Poets »

I received a Masterclass subscription for Christmas and I started right away with Ru Paul. I felt he would be the best person to help me reorient myself to the new year. His talk was about recalibrating the self at the deepest level.

The class was not about drag, per se, other than his famous quip, “We’re all born naked, the rest is drag.” It was mostly about tuning your frequency to what people see. Not suprisingly he recommended meditation for this and talked about cycles of cynicism that stall in bitterness, how the ego co-opts joy. He talked about his cultural lighthouses (Monty Python being a surprising one). In the second half, he also gave red-carpet and makeup tips (which are always mesmerizing to watch). For example, he says if you want more money wear a suit. Full stop. I don’t need any more money, so I won’t be buying new suits. But I appreciate the spirit in which that advice was given. He talked about your life’s work being to communicate yourself, but lest we fall into an ego-hole, he also talks about paying it forward and serving others. (“It doesn’t work if we’re all solo agents”). He tells you how to talk to your inner kid.

Then I watched the Cornell West Mastercalls which completely turned me inside out. West’s suggestion that we could see differently, act courageously and feel deeply was the invitation I needed to sign up in the first place). Ostensibly this class was an introduction to Philosophy, what does it mean to be human, etc.? Surprisingly he talked a lot about love and music. He asked us to, like Socrates, question our presuppositions. We can’t live without them, he says, but we need to question them with humility. We need to learn how to die. That was a big one. He talks about moving from being an observer to being a participant. He talked about pity versus compassion and he inspired me to read Eugene O’Neill’s The Iceman Cometh to learn the difference.

I really needed to hear his message about leaving “a bit of heaven” behind “in a world run by the hounds of hell,” to stay out there in the thick of it, even though things are really awful right now. After all, if the cracked vessel Cornell West can move ahead in the world with a positive attitude, what the hell is wrong with me?

He said that no matter how bad things are, love, joy, holiness and the sublime are still happening. (and I have to remind myslef, still happening on the internet). Both Ru Paul and Cornell West helped me reorient myself to 2022, not just in spite of recent anxieties but a lifelong one as well.

So how do these Masterclasses relate to writing? Well, these talks were both about what you choose to pay attention to and that's what writing is all about at its deepest level too.

That said, I’m excited about two new projects this year, an online poem about my grandfather and a more traditionally conceived Katharine Hepburn epic. NaPoWriMo 2022 is also coming up in April. I’ll only be doing two more years of NaPoWriMo and then I’ll have reached my goal of 300 poems. I haven't decided if I'll follow the prompts one last time or pick another theme.

I was very sad about the news that Joan Didion had passed away. Didion is my favorite writerly model for many reasons. After moving to Los Angeles many years ago Sherry, a friend from Sarah Lawrence College recommended Joan Didion as the best writer about LA (or California, I can’t remember exactly what she said). But yes, she is. I checked out every Joan Didion book from the Redondo Beach library. Although she was not a probable writer for me to love as a John-Wayne loving, glamourous, Hollywood insider. My favorite books of hers were Where I’m From (which helped me think about my own family history in a critical way) and The Year of Magical Thinking (which made me soberly approach my own magical thinking).

Didion also helped me think about Los Angeles in a new way. She talked about America and the cult of exclusion (class, race, etc.)…she understood intelligentsia and she understood California and she was a long-time New York City resident. She could credibly make the case for a west coast intellectualism. And yet no one seemed more included, seemed more a part of the upper crust of that culture than did Joan Didion…and yet she called it out anyway, which is remarkable.

Joan Didion and the Voice of America: This piece talks about her connection to Normal Mailer and V.S. Naipaul’s pessimism-as-style, how that was always misread as white-woman fragility. The article also focuses on her important writings about race and how she typed out Hemmingway’s sentences to learn the craft of the sentence. The article also mentions “her ability to combine the specific and the sweeping in a single paragraph.” Apparently the writer is working on a Fall 2022 exhibit on Didion at the Hammer Museum. I look forward to that.

Joan Didion’s California: This article talks about “the foundational mythologies of California” and “Didion’s generational ties with the state…her mercurial and melodious sentences…her signature lilt…her own indelible, intruding, and exacting subjectivity…the routine admission of her presence across all her writings…her deep displays of sentimentality” and how “no one who enunciates the moods of this place [California] quite like Didion does….to write hard about the places we love and has permitted us to be a little glamourous while we do it.”

What Joan Didion Saw:  “Didion was a pattern-seeker” this article says, she found “the markers pointing out how the whole thing worked….through her efforts, the craft of journalism changed…her ominous, valley-flat style…[working] in the danger zone between sensibility and objectivity: to be receptive to a passing feeling, a change in cast, and then to bear down, with unsparing rigor, in the work of understanding why.” The article explains her “flash cuts”…her “restless mind” and quotes Didion to say, “In retrospect, we know how to write when we begin. What we learn from doing it is what writing was for.” Didion teaches us “how to put together a paragraph, whether to add the ‘the’ or not…what to do with those sentences, how to turn the craft of storytelling away from shared delusion, is the effort of a life.”

Nobody Wrote Sentences like her: According to Didion, “to shift the structure of a sentence alters the meaning of that sentence, as definitely and inflexibly as the position of a camera alters the meaning of the object photographed.” This article talks about her “incisive, steely prose,” the piercing restraint … palpable down to the grammar, which she called “a piano I play by ear.” The article also mentions her musicality, “controlled and concise sentences,” how she deconstructed mythologies including the California dream, the myth of New York City, her disillusionment, her economy, her questioning of the self, her sarcasm and irony, her understatement and the enigmatic way she could convey a mood.

There are two Library of America editions available:

And a book about her writing style, Joan Didion: Substance and Style by Kalthleen Vandenberg 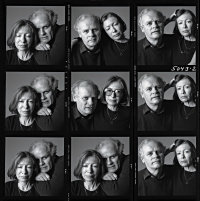 Didon’s husband writer John Gregory Dunne was no slouch about writing about Los Angeles himself. And their movies are worth checking out. A particular favorite of mine from my college Al Pacino obsession is The Panic in Needle Park.

Didion taught me there was a way to speak as the self in a self-obsessed time, how you can be hard on yourself or ambivalent about yourself without letting yourself either disappear or take over the message. Not that I ever get there, but she’s the writer I most wanted to be like, the reality of her suffering, the mythology of her seemingly enchanted life, the hard, slogging work…all of it. 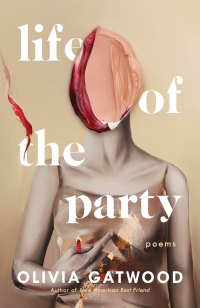 A  friend of mine in Albuquerque recently told me about the book of poetry Life of the Party by Olivia Gatwood because it’s a book about violence against woman (which we were talking about at dinner one night) and because Gatwood is an Albuquerque poet.

There are some really good poems in the book but it was honestly a hard read for me. Very hard. I could only read a few poems A WEEK because I felt the author put herself in dangerous situations and then felt traumatized by them. She did things for men long past when she could (and should) have easily stopped. Dare I even say it, she felt like a doormat complaining about being a doormat.

But I then felt a lot of guilt over blaming the victim (because some crappy things happened to her). Her lack of boundaries frustrated me (granted, I have too many probably) but many of her conclusions were a bridge too far for me.

But that said there were some great poems: “Girl,” “Ode to Pink,” “Ode to the Women on Long Island” (a particularly memorable one  I recommended to Monsieur Big Bang for a character of a show he's working on), “Sound Bites While We Ponder Death."

Over Christmas I discussed the book with friends at a dinner party and how I was struggling over how to verbalize my frustration with Gatwood’s lack of boundaries. My friend who recommended the book, her significant other gently said to me, “maybe her definition of love is very different from yours.” And I was like, oh yeah; that would explain it pretty much.

Talking about books with other people is a good thing.

Posted at 09:00 AM in Books to Read, Craft, Today's Pillar of Poetry | Permalink