« The Essay Project: The Contemporary Poets | Main | Words in the Snow » 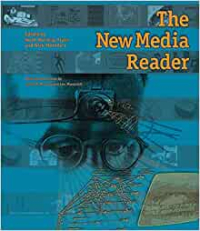 In one of my final posts of the year, I wanted to check in one last time with a bunch of thoughts about digital lit. This past year I cracked the gargantuan New Media Reader textbook (this thing: it will take me years to finish it!) and I’ve continued working on my own digital lit projects.

The introductory chapter itself was blowing up my head, “Inventing the Medium” but Janet H. Murray and it was basically a review of the history that got us to this point.

She talks about technology’s “breathless pace of change” and “braided interplay of inventions mid-century” (1950s/60s). She believes new media solved the issue of “linear media’s failure to capture structures of thought.” I would agree that linear media has limitations but we’re finding now that digital media is also struggling to keep us from a new kind of madness and that when Murray extols the new “consciousness reforming itself” we can now see that this is not always in positive ways.

She says the “shelf of Knowledge exploded.”  Unfortunately, so did the shelf of false knowledge, (oh yes, the earth is flat again), to which Murray says this might speak more to the gaps between technical prowess and social development.

Digital tools have also increased, she admits, weapons acceleration, “killing someone as a way of information processing” in a deadly proliferation of creation and destruction. But Murray ultimately has (or had, this book is from 2003) faith in the same progress that led us to the atomic bomb. We are smart enough to find a way out.

And here is where I found the essay pretty illuminating. She divides us into two camps: the engineer and the humanist. This demarcation pretty much can be applied to any argument you’re having with someone over technology. (Oh well, you’re just a humanist!) But seriously, it shows us the roots of all the enthusiasms and resistances. And I have great sympathy for both sides, being in a humanist avocation and having an engineering vocation.

According to Murray, the humanist is worried the technological changes will lead to cultural confusion and existential befuddlement. The engineer would say we just need to invent the proper fix or instrument to solve any problem that comes up. The answer, for them, is problem-solving systematically.

Murray invokes Hitler when she talks about the trajectory of unchecked rationalism (it would be most efficient to eliminate people draining the system, the elderly, religions we don’t like, etc.) but unchecked irrationalism is also horrifying she says. Humanists the see limitations of systemized thinking and the ultimate unknowability of life, its absurdities, suffering, longing, and needs. Engineers are solutions-based but often blind to the sufferings their solutions can inflict.

Murray says digital artists are interested in the exploratory processes of the mind. And personally, I find this to be a very, very interesting idea but I just wonder if we're in a better place than after 25 years of tinkering with mental processing.

New media artists are attracted to random combinations, the arbitrary nature of stories, choice and the garden of forking paths. Murray says in this way, we have “outgrown the garments of print” (and yet books, to a lesser degree than before, still thrive). She points to the failures of newspapers and their slowness to recover from inacurate news (Paul McCartney is dead, Ernest Hemmingway is dead, Dewey won) and yet I can’t help but think about the statistic that false news travels on the internet 10-20 times faster than the truth.

She takes us through a historical tour of the decades.

In the 1950s we saw quantitative data manipulation, artificial intelligence, databases, networks, multi-user terminals, the first formulated idea for the internet and hypertext as a term was coined, early ideas about networking that would one day transform institutions. In fact, she says, many of the ideas ended in the 1960s, but machines were too slow and those ideas didn’t get far at the time, only becoming realized in the 1980s and 90s.

And by now, banking, commerce and almost everything else.

So here we are today with some great muti-media experiences, and yet corporations still have too much power over consumers and we suffer under the illusion of choice. We are more alienated from the real world and the damage humanists predicted is not just a dark fantasy anymore. We have seen an increase in surveillance, exhibitionism, stalking, threats to our productivity, shared hallucinations, disorienting data overload and Murray does admit this was all predicted by the post-modernists who “no longer believed anything [previously] asserted.”

Murray describes computer scientists as having an “exhilarating earnestness” while learning about “active construction of meaning” while at the same time humanists were celebrating deconstruction and the unraveling of meaning. Humanists have been exploring fragmentation, distrust of the imagination and a “loss of faith in the great meta-narratives,” a distrust of endings. They revel in the middle.

But there is something to be said for the potato root system, of a growth with no beginning or end, as long as it’s ultimately digestible (to stay in the metaphor). Digital media has also given us new avenues for whimsey and all the “good” kinds of communication and expression.”

And it bears a reminder, this is a 2003 book. Murray made grand predictions about how new media would resist commodification (it didn’t), that we would not crushed by our own knowledge (we did become crushed by our inability to parse the good versus the bad knowledge), and that our machines would not become our Gods (uh…yeah), and that new media would somehow miraculously escape ideologies (about that…).

So all my angst aside, I’m keeping-on with exploring digital media and some of it is delightful.

I’m still seeing some  problems with accessing digital works. A lot of these older sites were not build as https, today’s secure protocols, and the authors have not upgraded them for usability. This is not unusual. It’s so much work to launch a project as it is and then by the time you move on to your next project, there’s no time to continually return to older ones and update all your old stuff. It makes the pieces highly perishable and costly, especially considering the time involved in making them.

https://breathe-story.com/ You have to read this short story on your phone. It doesn’t work well for ipad or computer because it uses your GPS location to build suspense into the story. It was short and too much of a sketch than a finished piece. Plus the GPS insertions were more unintentionally funny than suspenseful. (Even my dog Franz was captured in the first screenshot part of the story). 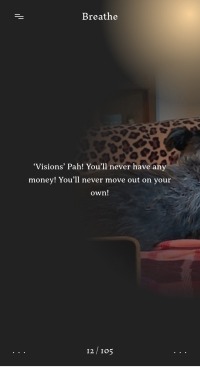 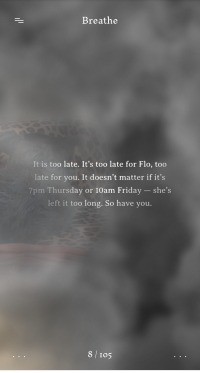 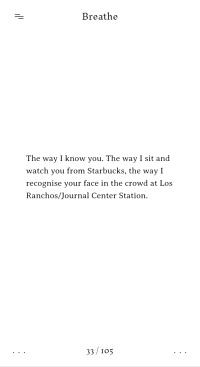