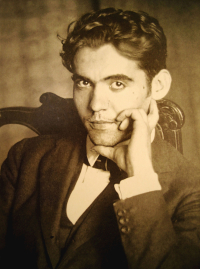 I remember this next essay in the David Rivard class packet. It was a popular one at Sarah Lawrence because Federico Garcia Lorca wrote so eloquently about New York City. The essay is “The Duende: Theory and Divertissement” and like other Spanish works of poetry and prose, it dances around the topic a lot. And I really like that about Spanish poetry; but I’m annoyed by the fog of un-specificity in the essays. It starts to sound like so much spiritual, tent-revival mumbo-jumbo after a few pages.

Lorca's essay is describing moments when someone will say, “Now that has real duende!”

He says Manuel Torres once said this about a singer, “You have a voice, you know all the styles, but you will never bring it off because you have no duende.” This statement is so assertive you sense there's a blowhard behind it. Lorca goes on to say duende can be found in “anything that springs out of energetic instinct” whatever that is.

Lorca admits it's all a big mystery, “ a mysterious power that all may feel and no philosopher can explain.” He calls it an “earth-force.” All artists work toward perfection “at the cost of a struggle with a duende,” which is not an angel or a muse, “the Muse dictates and…prompts. There is relatively little she can do, for she keeps aloof and is so full of lassitude….The Muse arouses the intellect….but intellect is oftentimes the foe of poetry because it imitates too much.”

Ok, I'm half way there but not completely...sounds tricky. He continues...

“The Girl with the Combs had to mangle her voice because she knew there were discriminating folk about who asked not for form, but for the marrow of form—pure music spare enough to keep itself in air. She had to deny her faculties and her security; that is to say, to turn out her Muse and keep vulnerable, so that her Duende might come and vouchsafe the hand-to-hand struggle. And then how she sang! Her voice feinted no longer; it jetted up like blood, ennobled by sorry and sincerity, it opened up like ten fingers of a hand around the nailed feet of a Christ by Juan de Juni—tempestuous!...”

The arrival of the Duende always presupposes a radical change in all the forms as they existed on the old plane. It gives a sense of refreshment unknown until then, together with that quality of the just-opening rose, of the miraculous, which comes and instills almost religious transport...”

"All of the arts are capable of duende, but it naturally achieves its widest play in the fields of music, dance, and the spoken poem, since these require a living presence to interpret them…”

"The magical virtue of poetry lies in the fact that it is always empowered with duende to baptize in dark water all those who behold it, because with duende, loving and understanding are simpler, there is always the certainty of being loved and being understood; and this struggle for expression and for the communication of expression acquires at times, in poetry, finite characters.”

If you’re still confused, here is more information about the Duende in Wikipedia: https://en.wikipedia.org/wiki/Duende_(art)

The essay has a spiritual element I didn’t quote but that is captured in Wikipedia: “at least four elements can be isolated in Lorca's vision of duende: irrationality, earthiness, a heightened awareness of death, and a dash of the diabolical.” The Wikipedia also contains Nick Cave’s description of duende as a sadness in love songs.

So although I think Lorca’s very long-winded description is way too elusive to be useful (which may be the point), I actually do believe in duende. The problem is, it’s subjective measurement. What produces an emotional response in one person does not produce an emotion response in another. A lot of it has to do with culture and environment.

This is duende as described in the final stanza of Frank O’Hara’s “The Day Lady Died.”