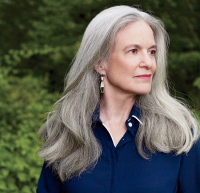 Next up from Suzanne Gardiner's Sarah Lawrence Essay class back in the mid-1990s were three pieces by Sharon Olds who was very popular with the women I knew at the college and it seemed this was because she was a very contemporary confessional poet who was not afraid of writing about sexual content, parental abuse. And that was very appreciated in the 1990s. But I had a hard time getting into Olds because her prose and verse seemed a bit flat to me. This feels almost like sacrilege to say.

In three stapled packets there were two tiny memoir essays that I can’t find online or referenced in a book anywhere although the photocopy is clearly from a journal or anthology somewhere.

In the first little essay, “Small Memoir on Form” the first sentence is “Meter and rhyme always had a strong power over me” and that’s pretty much about as exciting as the thing gets.

Olds takes us through her autobiographical reading-list as a teenager, which sounded pretty advanced to me but I recently read Mary Oliver's childhood list and it was also pretty advanced. Olds read Shakespeare, Dylan Thomas, e.e. cummings, Auden, Roethke, St. Vincent Millay, Donne among others…it really is a very long list. Then how she studied foreign languages to read international poems in their original languages (now that's passion for poetry!), and then how she loved diagramming sentences….

“There was always that danger, that any received form might take over, emptying itself of the heart it was meant to support.”

College was scanning poems and avoiding history, math and science. Then she lists all the forms she practiced until earning her Ph.D. and immediately freeing herself with free verse:

“I think I saw the sonnet form as somehow located in an atmosphere of elegance—a court with a Queen—a decorated place where one fit into the pattern. A kind of Anglophile upper-middle-class world. And I wanted to sound like a “real person”—an “ordinary woman.”

What I find interesting here is the juxtaposition with the essay last week by Philip Levine and his heartfelt scenes, narratives and conversations. Olds' essay is more abstract and unparticular about what these references and influences opened up in her, bringing it all alive for us. She talks about wanting to get on the page “energy and joy of language…an independent will and soul…pent-up feelings and subjects…sentimental and melodramatic.” But there's no energy and joy here somehow.

But she does say she always a poem was something “inside you, almost written really, and it’s up to you to get it out intact. Transfer its life onto the page until it can breathe on its own.”

She talks about dancing, hard-rock dances and the contrapuntal, the trochaic rhythms of her early poems. “For the first years, all I wrote was personal…it was all I could handle. My heart was too small.”

Then she goes into process a bit:

“Form. I try to start at the beginning, and work through toward the (as yet unseen) end, trying to feel when the poem is going away from its path (which it’s creating), it’s heart-line (head-line, body-line, soul-line). If I’ve gone the wrong way—cross out back up to where it feels right, starting bringing it down again.”

“The strong energy position is the beginning of the line for me rather than its end. I see the images scooping up…”

She then questions whether we want poems to “’lift up’…from the level of ‘mere life’” or “get it on the page as is.”

“You have control over what you write on the paper, but not what comes into your head. You don’t make an image, like a cake, out of ingredients. It ‘comes to you’: it’s a gift….the whole poem is like that—it comes to you, appears inside you, you let it out onto the page half active, half receptive, a kind of love-making. To put more emphasis on formal patterning would be, for me, to give too much power to one side of the equation—to be false to the terms of the enterprise.”

So much of human thought is still so mysterious. I do think you can control thought to the extent you control what you read, hear, what your conversations are about. You can prime the mind. But you can’t manipulate it fully to operate however you'd like.

Olds ends on her idea of free verse as a “soul made visible” and strangely the last little paragraph is about the power of poetry. And that “some say” it keeps us from going over the edge."

The next little essay is “A Brief Visual-Arts Memoir” and it’s similarly flat.

“I don’t remember the first real painting I saw. I drew a lot, wrote a lot, made Christmas cards and elaborate tiny place-cards for large family dinners.”

She talks about documentary photographs in Time Magazine that moved her. She says, “Of all the arts, dance is the most important to my work.”

She continues, “…memories and feelings…locked up in our muscles.”

“I feel the beat (meter) physically.”

“So the visual is essential to me (perhaps as the musical or the conceptual might be to someone else), and the visual arts are important to me mostly for the joy they give me.”

All the many declarations of things that "are important to me" feel empty and undeveloped.

But then she does say something interesting about Judy Chicago’s The Dinner Party piece: “Chicago’s combination of massive ambition and precise gorgeous detail—a large dramatic piece made of many individual pieces.” She also likes Louise Bourgeois’ piece Femme Ccouteau. But her favorite art object is New York City. End of essay.

So….those were pretty uninteresting for me. But then the last little stapled was something different altogether. One page is a biographical statement of how she wrote “The Wellspring” which was a poem included in Best American Poetry 1989. She says she was writing the poem on the train from Pittsburgh to New York City and:

“…it took eight hours to find the ending, or for the ending to find me. I wrote and wrote, and crossed out and crossed out. It’s something that happens to me sometimes—getting stuck on an ending for hours and hours. Probably lots of people would leave it then—take a break—and that’s probably the right thing to do. I just can’t. The poem keeps pulling at me. It pulls me back to the point where it starts to go wrong. It won’t let me go…I have to finish it, according to its own lights, before I can be free of it and it of me…This ending was waiting for me at home. When I saw, across the reed swamps and the Palisades, the tiny steeples of Manhattan, I ‘got’ it.”

Whoever turned in these packets then added “The Wellspring” poem on the next page. Then the page after that is the rewrite of the poem, now titled “The Source” from her 1996 book which used the title The Wellspring.

This is a poem about sex with men and a very physical description of giving head. The poem then turns into a poem about her father which is pretty amazing (and disturbing sub- textually) but still shockingly amazing. I think in the class we were probably discussing the editing process between the two poems and evaluating the changes.

Obviously Olds didn’t let the poem go on the train that day. She kept rewriting this quite extraordinary poem. I feel the first poem was stronger, more confident. The book's version became more tentative.

For example the Wellspring version starts with this line: “It is the deep spring of my life, this love for men.” That line must have had an impact because I can find quotes of it online as one of the great opening lines of a poem.

The same can't be said for the changed, more vague version in the Source poem, “It became the deep spring of my life.”

It’s a bit less salacious the later-day way. Not to give the poem away but Olds eventually has a conversation with sperm and the earlier Wellspring lines “Stay here—for the/children of this father it is a better life;/but they cannot hear me. Blind, deaf...” become “Stay here--/for the children of this father it may be the better life;/but they cannot hear. Blind, deaf...”

The certainty becomes a “maybe.” And the heartbreak was in the certainty.

Sharon Olds has very nice hair, by the way, so I added her to my list: https://www.pinterest.com/poetmarymccray/poets-with-sexy-hair/