« More Explorations in Digital Media Poetry | Main | The Essay Project: Poems, the Will and God » 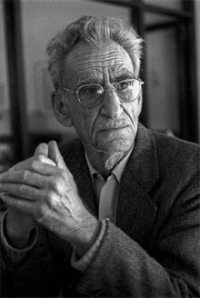 Catching up on our essay class essays, the next essay in the Suzanne Gardiner class with "George and Mary Oppen: Poetry and Friendship" by Sharon Olds which can be found in the book The Oppens Remembered: Poetry, Politics, and Friendship edited by Rachel Blau DuPlessis (can read on Google books).

This essay is mostly about Oppen as a person and what Sharon Olds likes about his poetry: its cleanness, its ferocious and tenderly agile grammar, its passion for language and the human…its deep genuineness…air of inevitability…for all their wroughtness [the poems] had the authority of natural things….When I read Oppen, I could feel parts of my brain being used that had never been used before….his morality, his politics….a clear-eyed witness…his objectivity and his calmness…his persistent, tireless defining.”

It's sounds so vague but that's how poets talked about poems in the 1990s.

She also liked his “combination of modesty and certainty. It gave him a strong air of moral authority, authority without arrogance. And there was in his work such a sense of male sweetness, the strength that lets a man sow his vulnerability.”

Interesting, the opposite of toxic masculinity.

Olds talks about how sometimes she would “believe it and not understand it…the cogs locked—everything stopped.”

She liked how he was “alternatively elevated and concrete” and how he wrestled with “the problems of privilege, injustice, isolation, identity and poverty.” And how poems could “float in several meanings…rather than trying to find a single path through the poem and stick to it grimly” and how he had “the sound of a prophet….a religious sense.”

She recommended Mary Oppen’s memoir Meaning of Life and talked about visiting the couple in San Francisco and staying at their house and the conversations she had with them.

After the essay, there were attached to the stapled packed a few photocopied pages of 'George Oppen’s Notes' from  his letters to Rachel Blaus, 1965 in Selected Letters of George Oppen.

I talk about the following note in my own little essay on digital literature: “the poem is NOT built out of words, one cannot make a poem by sticking words into it, it is the poem which makes the words and contains their meaning. One cannot reach out for roses and elephants and essences and put them in the poem.”

But a lot of these notes I either disagreed with or didn’t quite understand:

I wholeheartedly disagree with this next bit of self-servingness of WANT:

But these are interesting: 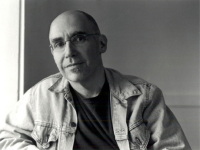 Speaking of Robert Frost, the next essay in the David Rivard class packet was Rivard’s own draft essay on Robert Frost and other poets, "Sentences and Syntax: The Voice Making Itself."

I don’t see this title anywhere online so it’s possible the essay was never published or published under another title.

He starts by describing an early-in-the-film one-shot scene from Goodfellas where Kenry and Karen enter The Copa and how this shot is is part of Martin Scorcese’s “cinematic syntax, how the camera becomes “a mediating character, an intelligence” and can be seen in other Scorcese movies like Mean Streets, Taxi Driver and Raging Bull.

He says Robert Frost has a similar stamp of identity and Rivard uses "The Woodpile" to illustrate how the poem builds “an air of vague psychological menace.” The poem uses a particular arrangement of words to build this effect, Rivard says, “the scrambling of referents….expanding sentence lengths,” lots of conjunctions that build the scene and other words of “propulsiveness.”

Rivard then reviews Frost’s ideas about “sound of sense” (how the rhythm and intonations of the sentence have its own sense disconnected from the meaning of the words and Rivard uses Alice in Wonderland as an example of the sound of sense).

Rivard then uses the poem “Provide, Provide” as an example of the spoken voice which he differentiates from the “plain voice” of 1960s poets like M.S. Merwin, James Wright, Louis Simpson and Robert Bly…with their “straight-forward and uncomplicated syntax.” Rivard says that  “as a style it is one of the dominant modes of magazine verse. The poem tends not to change pitch from sentence to sentence, never mind the line, and a kind of stasis sets in.”

Which is pretty amazing thing for me to read right now because Rivard recommended I read some Merwin when I took this class and Merwin's plainness drove me batty at that time and I remember writing up a paper for Rivard complaining profusely about it and feeling like Rivard was a bit offended by my complete distaste for Merwin at the time. I’ve since revised my opinion as people do when they grow up.

Anyway, then talks about Arthur Smith’s poem "Nap" and how everything in the poem is pointed at and that there’s “a lack of moment in the syntax.”

Then Rivard talks about Frost’s “sound of sense” theory possibilities in free verse where “the shapes and movements…are controlled largely by the sentence, not the line,” how greater variation and control can be used for pitch and postures."

This is a good point about free verse. He talks about how Louise Glück and William Carlos Williams do that. “Line breaks, phrasal units, clauses within sentences—all act as counterpoints to the sentence as it unwinds down the page.”

Rivard says, “the argument made by the sentence is the argument with the self.” This almost sounds like a George Oppen note.

Next Rivard talks about Philip Larkin’s poem "Reference Back" and Shakespeare’s "Sonnet 71" where Rivard talks about the poem's working out of thought and how inverted syntax and the  left-out “connective tissue” can “produce torque” and tension in the lines. “The language has plasticity and mass as well as motion and exactness.”

Then he talks about Rilke’s "Spanish Dancer" which he compares to  the Cezanne’s paintings and their use of color to create sense. Likewise, Rilke uses tension with music and meaning.

Then he discusses Denis Johnson’s "In a Light of Other Lives" and how speed is caused by “some unnatural line breaks” and some parings of plain and “extravagant” adjectives that “creates a charge.”

There's a lot going on in this essay. The next essay in Rivard packet is Adrienne Rich’s "The Hermit’s Scream," which we already covered in the Gardinier class so I’ll be skipping over that. This is the only overlapping essay so far so it must have been a popular one for poetry workshop teachers back then.