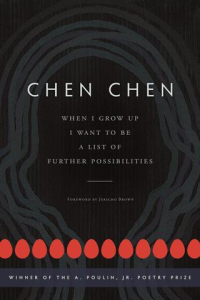 I picked up Chen Chen’s book When I Grow Up I Want to Be a List of Further Possibilities because of the Cher reference in it. But this book did not disappoint. Every poem was a dream. It’s one of those books you enjoying so much you slow down in order to be able to be with it longer. Every poem was an experiment of some kind but with an emotional quality that didn’t feel cold.

“Self-Portrait As So Much Potential” starts us off by introducing us to how the poet sees himself and what his mother wanted him to be. Chen Chen writes delicious lines like “I’m a rusty yawn in a rumored year. I’m an arctic attic./Come amble & ampersand.” It’s a scat skirting around the emotion of being a disappointment as a gay son. Experiment that are touching makes these very engaging pieces. “In the Hospital” is another good mom poem.

Chen Chen does a kind of spiritual questing here with a kick of humor, like in “I’m Not a Religious Person But.”

And the sheer scope of his identity poems: “I am making my loneliness small” from the poem “West of Schenectady” and “my hands/have turned out to be no bee,/all bumble,” from “How I Became Sagacious.”

His experiments are even somehow holistic as in “Please Take Off Your Shoes Before Entering Do Not Disturb.”

And that’s all just in section one! I’ve check-marked almost every poem in this book as a favorite. So from here let me just list the favorites of the favorites:

The lovely ode “To the Guanacos at the Syracuse Zoo” ends with “But isn’t this/how it happens?Aren’t all great/love stories, at their core,/great mistakes?”

“Elegy for My Sadness” hit a heartbreaking home-run with its conflation of Frenchness and depression and I’m sure I will be coming back to this poem many times.

“Kafka’s Axe & Michael’s Vest” covers the idea of silence. A few of his poems reference Paul Celan and asks the question on all of our minds, “What does it mean, to sing in the language of those/who have killed your mother,/would kill her again?” and the tough question “Are we even built for peace?”

We get more of his struggles with his family in “Chapter VIII” when he says “I tried to ask my parents to leave the room,/but not my life. It was very hard. Because the room was the size/of my life.”

And the love poem which is the ode “For I Will Consider My Boyfriend Jeffrey” – “For he looks happy & doesn’t know I’m looking & that makes his happiness free.” 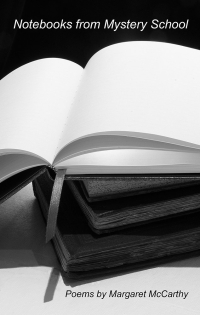 Likewise I bought the chapbook Notebooks from Mystery School by Margaret McCarthy because of her Cher poem in it and the interesting thing about reading this collection was how I had misjudged the Cher poem out of context of the rest of the chapbook. I had read her poem, “Thirteen Ways of Looking At Cher,” which is a poem about aging and the transformations we perform in order to avoid aging’s abuse, as sort of dismissive and a critique of maybe what not to do, how not to age like Cher, but the lines were opaque so I wasn’t sure about that.

I was off the mark in any case. This poems are gritty and unapologetic about identity with poems like “Slut” and the free use of words like “crone” and hints at black-sheep arguments with her family. In hindsight I don’t feel McCarthy was invoking Cher as anything less than a admiring curiosity and that the reference to Cher’s “raven heart” was a reference to a “shaman heart” who illustrates that matter can match spirit (we're only as old as we feel).

The New Yorker had a good essay recently called "In The Wars, The Strange Case of Ivor Gurney" by Anthony Lane which was about Kate Kennedy’s biography Dweller in Shadows: A Life of Ivor Gurney.

This is an interesting piece because Gurney was a private and not an officer like some other famous World War I poets (Wilfred Owen for example). His poems are right in the trenches. He was also an accomplished composer.

The article raises questions about the border between sanity and genius. When discussing his orchestral work “Gloucestershire Rhapsody” the reviewer says, “We are at the core of the Gurney conundrum: where does musical ingenuity end and mental volatility begin? So many of his songs are like interrupted idylls, wrong-footing us with their surprising harmonic shifts, as if we had tripped from grass into brambles. Should we revere such an instinct for the unforeseen, or pity the anxious sorrow that lies beneath?”

Lane then talks about Gurney's poems and that “a reading of ‘Sweller in Shadows’ compels you to ask: Gurney was no Modernist, but by what token do we treat his thronging, darting effusions as testaments to an inward disarray, while the laying down of fragments, in the hands of T.S. Eliot, is viewed as a strategy of great deliberation and cunning?”

The article excerpts from his poems “To His Love” and “The Not-Returning.”