« NaPoWriMo 2021 Ends | Main | The Essay Project: Writing As If Our Lives Depend Upon It »

Books of Therapy and New Mexico 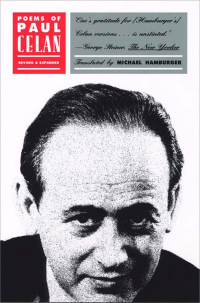 I read Poems of Paul Celan as part of an email inquiry last year. Celan is one of Germany’s most famous poets today, although he was controversial when he was alive due to ongoing post-Holocaust anti-Semitism. Both of Celan's parents were murdered by Nazis and Celan’s very cryptic poems have often been read as a way of his dealing with his tragic losses. This collection, translated by Michael Hamburger, is a great meditation on the translation process itself and the relationship between translator and poet, and the challenge of trying to move these more obscure poems into English.

from "The Years From You to Me"

"Your hair waves once more when I weep. With the blue of your eyes

you lay the table of love: a bed between summer and autumn.
We drink what somebody brewed, neither I nor you nor a third:
we lap up some empty and last thing.

We watch ourselves in the deep sea’s mirrors and faster pass food to the other:

the night is the night, it begins with the morning,
beside you it lays me down."

Here's the full link to the poem "Assisi."

“And the too much of my speaking:
heaped up round the little
crystal dressed in the style of your silence.”

From “Zurich, The Stork Inn”

“I know,
I know and you know, we knew,
we did not know, we
went there, after all, and not there
and at times when
only the void stood between us we got
all the way to each other.”

And this unnamed one:

“It is NO LONGER
this
heaviness
lowered at times with you
into the hour. It is
another.

It is the weight holding back the void
that would
accompany you."

Like you, it has no name. Perhaps
you two are one and the same. Perhaps
one day you also will call me so.

Celan is arrestingly cryptic. Hamburger describes it as a case of "minimal words, halting speech rhythms, the bare bones…”

The autobiographical final poem is heartbreaking.  The final essay, "On Translating Celan," is probably the best thing I’ve read yet on translating. 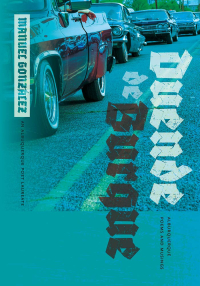 Duende de Burque by Manuel Gonzalez, the former Albuquerque poet laureate, is also a book of of therapeutic poems intended to dispel the pressures of trauma, in this case incarceration. Much of Gonzalez's project in this book is explaining his methods of teaching prison inmates to use poetry as a way of exploring their inner lives.

Moving from the Celan book to this one felt a bit like whip lash. Celan's project uses harrowing, difficult and destabilizing language in order to confront the propaganda and lies of the Holocaust. Gonzalez instead works through trauma with a much more straightforward language, similar to journaling and direct self-expression. This poetry is not for everybody. This book was difficult for me in its own way due the juxtaposition between cryptic obliqueness to saying-exactly-what-you-mean sincerity.

This book is emotional and psychological writing that is less about experimental craft than it is about locating an alternate self and having the courage to communicate it.  Poems in the book take on toxic masculinity and misogyny, and American and Spanish colonization. His generous spirit is very moving. There’s also a great local fragrance about the book and his take on Burqueneos he knows, including his departed musician-father who died before he could know him. There’s also a rich alchemy of Catholicism, Buddhism and mysticism.

There is a bit of language experimentation too, like the wordplay of “Sacred Sweat.” I liked his interludes and introductions describing the ABQ poetry community, the group poems and the workshop prompt at the end. Overall a very magnanimous impulse from this poet. 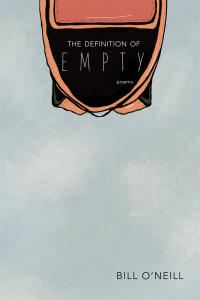 Different yet again is The Definition of Empty by New Mexico state senator Bill O’Neill who  spent time in the past working with similar New Mexico communities as Gonzalez but on the side of the juvenile parole board. Also noteworthy, Gonzalez is an Hispanic slam poet and O'Neill is a white transplant state senator.

O'Neill does a good job trying to check his white, male privilege and constantly recalibrates to speak from his own experience. You could say O’Neill works around the issue of appropriating stories as they say like a politician.

But this is nonetheless an interesting book about New Mexico and the issues that result from New Mexican culture and class structures with a blend of cynicism and hope, Poems touch on what O'Neill calls “an unvisited life” (“Castillo”), the lure of substance abuse (“Cruzita”), and the hypocrisy of the liberal elite in Santa Fe (“Hope House Denied: Unwelcome in Santa Fe”).

There’s a great poem about white privilege called “Hitch-Hiking at 28” where the character hitchhikes with a “strong belief” he's “walking into anything [he] wanted” and another poem called “Suspended from Sumer Prep School” which describes his own permanent file of misconduct.

O'Neill attempts to ID himself in the lives of the incarcerated, finding poignant details in lives of struggle and confusion. He even questions his own role in trying to improve the world, (“Easter Weekend”). 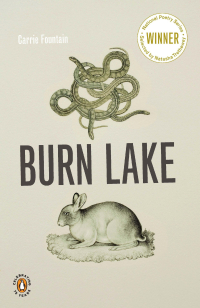 Burn Lake by Carrie Fountain, an older book on southern New Mexico recently given to me by my friend Mikaela, is a good book about a childhood and family life growing up in Las Cruces.

Fountain explores childhood in poems like this one about walking through an indoor mall, “Heaven,” mother-daughter poems like “If Your Mother Was to Tell Your Life Story” and “Mother and Daughter at the Mesilla Valley Mall."

What I didn’t expect and really loved were the historical poems like “El Camino Real” where  somewhere in the middle of a breakup/landscape poem, here comes Columbus; or we follow the Coronado Expedition looking for the mysterious lost ocean in the desert of New Mexico in “The Coast.” The book ends on a modern trek of kids to get cokes that reference historical treks in "El Camino Real 3."

And another great poem called “Purple Heart” about kids causing a break down in a teacher:

….this is the way
the violent gets you: not by coming
for you, but by leaving you behind.”

"….The river
is filling with water from far away,
cold water from the Rockies, the snows
melting, falling, simple, pulled
down the continent like a zipper.” 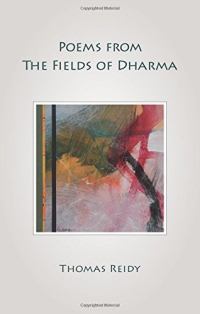 Here is an even older book I found at the bookstore in Las Vegas, New Mexico, Poetry from the Fields of Dharma by Thomas Reidy. This is a local Santa Fe book so if you live here you know what that means, every poem is centered on the page and an amateurish feel to the production. It feels very local but that never means it can’t be good.

There also is a plethora of Buddhist/Zen-inspired, retired-boomer Santa Fe poets. Like...a lot. But I keep picking them up because once in a while that particular brand of New Mexico Zen will bloom out of some unsuspecting self-obsession. In any case Thomas Reidy, an architect/builder, does a much better than average job at turning on his guru poet with the requisite modesty, and not just lip-service to humility:

“I will walk with you/for I have fallen enough to know that my perfect self/is dust.”

"Here’s the deal:
Commenting on life
as it appears to you
changes the experience for everyone;
observing the same events
in sacred silence
changes only yourself.
If you can life with the consequent responsibility,
say what you want."

Here’s another from "The Anchor"

“Soul is the true seeker
in the ocean of love and mercy.
Mind is the sea anchor
filled with the tides of karma.
The master changes the anchor
to a sieve.”

There are also plenty of love poems here for his painter wife Noel Hudson, who illustrates the book. Some are very moving and some are a little over the top. But a bit of schmaltz is worth it for moments like this from “The Gift,”

How often do we most fear what we most want? From “Silence,”

“Nothing is more eloquent/than/the silence of the beloved”

I don't think he's referencing a chatty-Kathy here. I think he means that eloquent silence of speechlessness.