A Book About the Spanish Flu 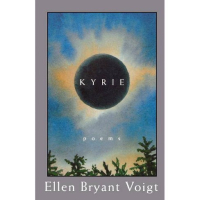 I was talking to my book club peeps about Covid and the 1918 Spanish Flu (err...Kansas Flu) and how undocumented that bit of history was in terms of monuments. We were talking specifically about the World War I parade in Philadelphia that killed so many people. My friend Sherry mentioned the book Kyrie by Ellen Bryant Voigt (1996) as a good book (if not monument) of poems about the Spanish Flu.

While I was in the thick of my own Covid-related family event I was unable to read them. But in January I picked the book back up and finished it. It’s a “must read” for pandemic poetry, depicting the wartime and rural devastations to small American towns.

A beautiful prologue follows the march of time with weeds and bushes and trees overtaking a place where people once lived:

“And who can tell us where there was an orchard,
where a swing, where the smokehouse stood?”

These are some heart wrenching poems about family members burying loved ones literally hours before succumbing themselves. There's one really pertinent one about a teacher dealing with sick, coughing children and how she couldn’t touch them when they cried. There’s another metaphorical one about how the flu spread all over the world,

“the sickness was more like brushfire in a clearing,
everyone beating the brush with coats and hands,
meanwhile the forest around us up in flames.
What was it like? I was small, I was sick,
I can’t remember much—go study the graves.”

There’s also a good one about a man who planned his own services as he waited to die, another about pure senselessness of the disease:

“The family next door was never struck
But we lost three—was that God’s will? And which
Were chosen for its purpose, us or them?

After the paw withdraws, the world
hums again, making its golden honey.”

Another follows a soldier in the war who returns home:

“Say he lived through one war but not the other.”

And a view from the undertaker,

“Have you ever heard a dead man sigh?
A privilege, that conversation.”