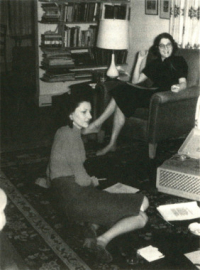 Poets Maxine Kumin and Anne Sexton are one of the interesting famous poet friendships. While working on the Essay Project I came across Kumin's book To Make a Prairie, Essays on Poets, Poetry and Country Living and reading that led me to read Anne Sexton, The Complete Poems. My friend Ann sent me a copy of her collected poems and it’s been sitting on my shelf next to a Sylvia Plath’s collection for over 10 years.

The Kumin book begins with a section of interviews. She talks about meeting Sexton in a poetry workshop and becoming long-time writing friends. Only two of the interviews resonated with me, one where she quotes John Ciardi as defining a poem as “a way of meaning more than one thing at a time” and the Karla Hammond interview which talks about poems with too much “furniture” and Kumin’s typical level of specificity, as well as message poetry, psychic distance in a poem, metaphors as “tricks” and other craft “tricks” she learned around form and meter that help her write poems.

Section two is full of essays on poetics. The first is a short piece on the creative process (digressions, improvisations), her memorial comments for Anne Sexton, another short piece on Sexton’s book, The Awful Rowing Toward God, and a longer essay on their friendship. ("The clear thread that runs through all the books of poems is how tenuous that life was. She was on loan to poetry, as it were. We always knew it would end. We just didn’t know when or exactly how.”) The other pieces in the section are about Kumin's own writing process: she calls alliteration “pyrotechnics” and she has this to say about metaphor: “is not smaller than life. It mediates between awesome truths. It leaps up from instinctual feeling bearing forth the workable image. Thus in a sense the metaphor is truer than the actual fact.” Huh.

Section three contains three lectures on poetry. Besides the Sexton pieces, these are worth the purchase of the book. There’s an excellent essay on different ways to close a poem called “Closing the Door.”  The next essay, “Coming Across” is about about the intent of the poem. The last essay, "Four Kinds of I," is about the point of view in lyric, persona, ideational and autobiographical poems.

The last section contains four essays about life on her country farm. 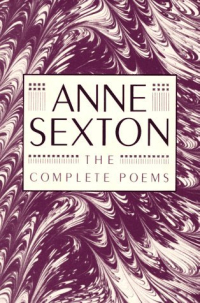 Now on to Sexton’s collected poems. I was intrigued by Kumin's comments. I didn't really like Sexton's poetry in college and I've been tired-out with confessional poetry for many years, so much of what we still read today is either the self-involvement of language experiments or confessional pieces. I tried to read Transformations in graduate school at Sarah Lawrence and although I liked it better than reading Cinderella years before, I still didn't love it.

But, as I say again and again, you have to be ready to read any book you pick up. It's as much about you as it is about the book. Some years you’re just not ready for it. I tried to pick up about 10 other poetry books and was unable to finish anything before I started reading Sexton. I was restless and didn’t know what kind of poem would break me out of it.

This book was interesting for another reason, like other books you read it defined the principle of sunk costs. Reading the first book in the collection was a real struggle but I kept going.

A few weeks ago I finished a MOOC called Mindware: Critical Thinking for the Information Age (University of Michigan) and we were learning the concept of Sunk Costs, which is like saying 'don’t throw good money after bad.' Bail out if you’re not enjoying something. I’ve always found this concept to be faulty in the case of reading, at least reading some things. For novels or short stories these days I’m very willing to bail out early. Life is short and getting shorter. But I usually hang in there with books of poetry, especially collected or selected works where certain phases might not be your cup of tea but soon you may very well come upon something transformative (to use a Sextonism).

As I said, I didn’t respond much to the first book (To Bedlam and Part Way Back) partly I think because I was expecting it to be more “bedlamy” from all the mythologies about her and critiques of her work. Maybe at the time it seemed more shocking. By the time I got to “The Operation” in the book All My Pretty Ones, I was getting hooked and appreciating her stoic and well-spoken candor about womanhood, like her famous "In Celebration of my Uterus." Many essays over the last decades have bemoaned her kind of shock confessionalism and I think this deterred me from reading her to be frank, especially since I’ve read a trillion confessional books. But I wasn’t turned off by Sexton. She was a far superior writer to many later-day confessionalists, rarely was she boring in this middle period. I found much to love in Live or Die and Love Poems as well. Details in these poems are also interesting snapshots of the late 1960s and early 1970s and it's interesting to read her thoughts after Sylvia Plath's suicide in "Sylvia's Death" ("O tiny mother,/you too!/O funny duchess!/O blonde thing!") Like Plath, Sexton references Nazis and the holocaust a lot and it doesn't really age all that well.

From "For Eleanor Boylan Talking With God"

Though no one can ever know,
I don't think he has a face.
He had a face when I was six and a half.
Now he is large, covering up the sky
like a great resting jellyfish.

From "The Black Art"

Never loving ourselves,
hating even our shoes and our hats,
we love each other, precious, precious.
Our hands are light blue and gentle.
Our eyes are full of terrible confessions.
But when we marry,
the children leave in disgust.
There is too much food and no one left over
to eat up all the weird abundance.

Much of her life, Sexton struggled with ideas about God and religion. From "Protestant Easter"

And about Jesus,
they couldn't be sure of it,
not so sure of it anyhow,
so they decided to become Protestants.
Those are the people that sing
when they aren't quite
sure.

From "For My Lover, Returning to His Wife"

She is so naked and singular.
She is the sum of yourself and your dream.
Climb her like a monument, step after step.
She is solid.

As for me, I am a watercolor.
I wash off.

It's in the book of fairy tales retold, Transformations, where Sexton is on fire. Re-reading both of my copies, (the collected set next to my original copy with the drawings and Kurt Vonnegut introduction where he first proposes his Cinderella story structure) was a revelation. This time I took the trouble of looking up any Grimm fairy tales I didn’t already know. Her tone is cavalier and very funny. Her similes are whimsical and very 1970s ("The queen chewed it up like a cube steak" and "She was as full of life as a soda pop" and "as ugly as an artichoke"). The tales are twerked in darkness and cynicism and at times awfully sobering, like the final Sleeping Beauty poem alluding to sexual abuse by her father ("It's not the prince at all/but my father/drunkenly bent over my bed.")

The Book of Folly was back to strictly confessional poems to some extent and trying out other group sets, like “The Jesus Papers” and the Fury and psalm poems in “The Death Notebooks,” all about her explorations with religion. I almost enjoyed these more than her final non-posthumous book, The Awful Rowing Toward God where I felt some of the deft skill devolving again all throughout the end period, as if the control slipped and poems became more diary entries, unfinished, even in the horoscope set. But throughout all of it there is the march toward the end, her self-loathing, more and more of an inability to see herself as anything but foul and often literally evil.

There's an intro essay by Maxine Kumin (her own book's version, but expanded).