The Essay Project: More About What Poetry Should Be 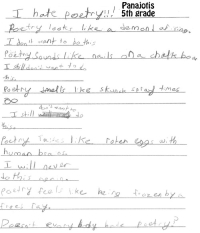 The image to the left is a hilarious critique of poetry by a 5th grader. Read more about it on DailyDot.

So I’ve finally come to the essays my assigned-partner (who I can’t even remember) and I picked for our essay week when it was our turn. Full disclosure, they were terrible. I had not a clue where to find poetry essays, was completely turned-off by the Sarah Lawrence library (and hated going there) and my partner had no interest in researching anything or doing any kind of group work (you know who you are). And so we were left with a few bad short pieced I found. Looking back, I disappoint myself.

"The Problem with Poetry" I brought to Sarah Lawrence as a clipping from something published in the St. Louis Post-Dispatch years earlier. I have no clue where we found the Rainer Maria Rilke quote. I was reading "Letters to a Young Poet" but maybe my partner found it. Clearly I was the one who photocopied it because I have a piece of paper taped to it blocking out the parts we didn’t want to photocopy.

"The Problem with Poetry" was an op ed by journalist David Awbrey. It was republished across the country at the time. This essay class was really not the best audience for this editorial. I find myself often simultaneously enthralled and mortified as I look back on my time at Sarah Lawrence, all the times I was a completely clueless and an unintentional shit-starter. I wasn’t brave enough to have been half as annoying as I undoubtedly was as I was trying to form and express my identity as a writer who knew nothing from nothing.

In any case, this article takes poets to task for many things:

“Unlike some great writers of the past -- Dickens, Zola, Melville -- many of today's writers have little understanding of how most people live and work. Where aspiring writers once labored on newspapers or in gritty real-world jobs, today's young novelists are more likely enrolled in a college creative-writing program. There, rather than rub their noses in the raw material of life, young writers produce self-pitying drivel on the tragic struggles of assistant professors of English or pick in their subconscious at the scabs of abuse, despair and other wounds caused by their own tiresome personalities.”

Ouch! That’s my classmates he’s talking about. Did I read this thing again before bringing it in?? No wonder I wasn't making friends and influencing people!

“For many of them the foremost issues are whether they get academic tenure or funding from the National Endowment for the Arts....so much current literature is written in an obscure language that is virtually incomprehensible to the average college-educated reader…jargon-ridden and code-laden…read by virtually no one beyond a narrow range of literary cult-followers.”

Here is bit of a weird part about the written message of God:

“Unique among world societies, Western civilization is a culture of the word. The Judeo-Christian tradition is based largely on the written message of God. American democracy is based on a clearly expressed legal system. In Western history, the printed word has been the primary agent of cultural change....It's amazing that at a time of wrenching social upheaval so few writers have anything to say that doesn't center on themselves and their inner lives. A look at a stack of recently published novels or the book sections of magazines and newspapers will turn up few purposeful guides to life in the late 20th century.”

Is he advocating political writing? That would be interesting considering Modernism and Post-Modernism's complete success in eradicating 1930s feminist and political (communist and socialist) writing from the earth, starting during the red scare and continuing through....like yesterday. Or is he only looking for life-guidance in modern art?

“After all, Ms. Angelou talks about rocks, rivers and trees -- and even Washington politicians understand what she means.”

I’m always torn between intellectualism and popular culture. Both sides are so adamant in their ideologies. I try to bridge the gaps between them and just end up feeling depressed. So little understanding flows in both directions. It’s part of our narcissism culture.  We’re so self-obsessed, we lack the muscle to even consider other points of view.

The second little essay was this: “[For the Sake of a Single Poem]” by Rainer Maria Rilke and I like this one, understandable, better than I did back them.  This is about writing yourself too soon.

What young person can resist writing too soon, though? But it speaks back to my earlier cluelessness, a cluelessness that is essentially evidence for his point. Here it is in its entirety:

“…Ah, poems amount to so little when you write them too early in your life. You ought to wait and gather sense and sweetness for a whole lifetime, and a long one if possible, and then, at the very end, you might perhaps be able to write ten good lines. For poems are not, as people think, simply emotions (one has emotions early enough) - they are experiences.

For the sake of a single poem, you must see many cities, many people and Things, you must understand animals, must feel how birds fly, and know the gesture which small flowers make when they open in the morning. You must be able to think back to streets in unknown neighborhoods, to unexpected encounters, and to partings you had long seen coming; to days of childhood whose mystery is still unexplained, to parents whom you had to hurt when they brought in a joy and you didn’t pick it up (it was a joy meant for somebody else -); to childhood illnesses that began so strangely with so many profound and difficult transformations, to days in quiet restrained rooms and to mornings by the sea, to the sea itself, to seas, to nights of travel that rushed along high overhead and went flying with all the stars, - and it is still not enough to be able to think of all that.

You must have memories of many nights of love, each one different from all the others, memories of women screaming in labor, and of light, pale, sleeping girls who have just given birth and are closing again. But you must also have been beside the dying, must have sat beside the dead in the room with the open window and the scattered noises. And it is not yet enough to have memories. You must be able to forget them when they are many, and you must have the immense patience to wait until they return.

For the memories themselves are not important. Only when they have changed into our very blood, into glance and gesture, and are nameless, no longer to be distinguished from ourselves - only then can it happen that in some very rare hour the first word of a poem arises in their midst and goes forth from them.”

Having chosen this piece now seems like an ironic little missive, me chiding my current self with a WTF from the past.