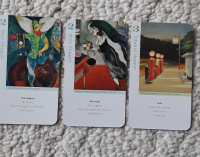 I’m currently working on a poetry project with playing cards, a regular poker-card sized deck. I come from a big poker playing family. Unfortunately, I am hopelessly terrible at poker and have lingering PTSD from these family games. Not only were they ruthless players but I was completely unable to see the patterns in poker hands, even with the cheat sheets my father created for me. I have a poker blindness it turns out. But I love the feel of a card deck in my hands, the very tactile slipperiness and the sound of a shuffling deck. I love to see some talented shuffler at work. I even liked building houses of cards. And as an extension of that, card designs is also fun and culturally interesting to me.

While trying to explain my own project to a friend of mine, I went through my house and realized I had quite a collection of cards, especially when I dug through the game closet. I had a book about Apache poker cards, a deck of historical Spanish playing cards (the real Wild West cards) purchased 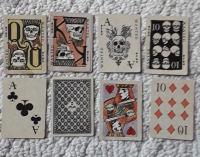 from Bent's Fort, Phoenix cards (supposedly they tell you your past life), I Ching cards, cards from the games Masterpiece, Killing Dr. Lucky, 25 Outlaws (those cards were designed by Dave Mathews interestingly), Go Fish Modern Art cards, Agatha Christie game cards and some cards from a
game called Art Shark.

To help explain my project I also went online to find other existing card sets and purchased two additional decks plus another interesting poetry game. 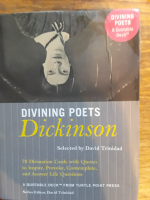 In a 1-card instruction, David Trinidad writes about the magic 8-ball quality of Emily Dickinson’s poetry. He created a 78-card tarot-like deck of big cards you can use for 1 to 4 card divination spreads. I’m pretty ‘eh’ about divinations only because a bad or good read can become a self-fulfilling prophecy. I mean, I’m skittish and superstitious enough as it is. And what good does it do you to know what’s coming up?

Anyway, I tried it out and each card has 1-2 lines of a Dickinson quatrain on its face. One drawback of the cards is the fact that there’s no attribution to the lines, so if you liked some you don’t have a clue (other than a google search) as to which Dickinson poem to seek out. The largeness of the cards was also a big unwieldy.

I pulled three cards and here were the results: 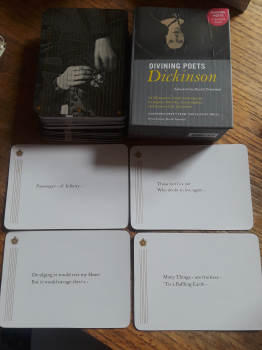 One question I asked was about a sort of screwball endeavor and should I continue with it:

The second question was about guidance for a current project not going well:

"Those not live yet
Who doubt to live again —"

(I have no idea what that means.)

The third question was open ended, “tell me something about life?”

"Many Things – are fruitless –
‘Tis a Baffling Earth –" 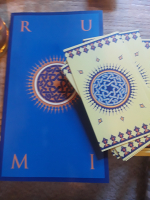 These are very narrow cards that work similarly to the Dickinson deck, as divination. Created by Eryk Hanut and Michele Wetherbee, they have simple to complex spreads, using Rumi verse as life guidance. The set also comes with a somewhat big book (for card sets anyway) on the history of Rumi, divinations and how their project started.

I did the simplest spread of three cards.

The spread was as follows: First card (what brought on the situation), second card (what is the current situation) and third card (what will happen or “how to deal with it.” I love the double meaning of deal there, as a coping strategy and being dealt cards.) I can tell you I never "dealt well" with the poker cards I was dealt. Anyway,

The cards are coded into six families. The three I pulled were red (love), eggplant (ordeal), green (reward). 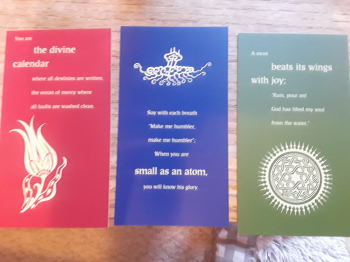 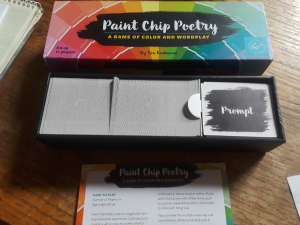 Some issues: it was hard to get the paint chips out while they were still in the box and yet pouring them out of the box felt like a potential nightmare. Also, they’re ordered in perfect color-wheel order. Playing with them messes that up. Not for OCD people. It bothered me and I’m not OCD. Also, there weren’t enough prompt cards.

Each paint chip has a corresponding word. The basic idea is that you pull 12 color chips and a prompt and write a poem using some or all of the paint chip's colors or words.

The first spread I sent to my friend Christopher. We’re doing a cross-writing project similar to what Wordsworth and Coleridge did. He wanted to write a new poem and asked for prompts. This box seemed a pretty handy prompt generator. We'll see what he comes up with. Here were my chips, prompt and the resulting poem. 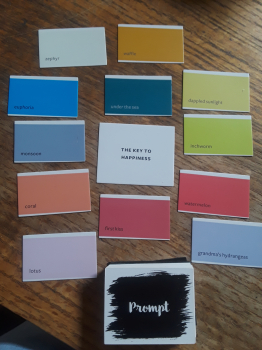 Traveling
to Watermelon Mountain is to go
to the bottom of the sea after all
the blue has been washed away.
Coral fish skeletons swim around
mesas and settle in buttes.

I came to find
my grandmother’s hydrangeas
growing like a fence along the dirt road,
rustling like mystic royalty or a memory
of lavender blowing in the dust.

Euphoria is colorless
here, a breeze from the West
waffling around you, dappled
sunlight after the day’s spartan
monsoon.

The key is catching up
with the zephyr. The key is often surprising
Like every first kiss. You come upon it
and stop to say hello like an inchworm
considering the cottonwood leaf
with his many feet.

Posted at 09:56 AM in Craft, Poets in Action, Whole Life of the Poet | Permalink