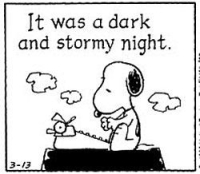 This is the second essay overview of three from Elton Glaser's “Entrances and Exits: Three Key Positions in the Poem” which you can’t find online or in a published book.

Glaser quotes Robert Penn Warren who said, “the great battle of the poem is won or lost in the first line, or in the first five lines anyway.” This doesn't seem absolute to me. Some poems with weak first lines do recover. It all depends upon the reader. But the opening scene of any kind of discourse is a heavily loaded position. Structure matters. First lines are like foundations. Without strong first lines a poem could collapse.

But maybe you're going for that.

Glaser summarizes how first lines help a reader understand where they stand. First lines pull them in through the keyhole (to borrow from John Ashbery's quote from the first section of the essay). He also quotes William Stafford who uses the metaphor of the fishing line tugging on a fish. You're luring readers in.

Glaser offers some questions to consider:

1. Whose story is this poem?
2. Whose voice is speaking?
3. What promises does the first line make (in story or form)? Are conventions and patterns rewarded or thwarted?
4. Does the poem lure the reader in with suspense, a puzzle, a surprising or shocking image?
5. Does the story start too far back? Does the story start in the middle of things?

Glaser quotes Nancy Willard who says a first line lets you into the house of the poem like a homeowner or a thief. I love that idea. As a writer, are you the owner or the thief?

Glaser himself talks about a poem relaxing into itself, that it must unlimber before the reader loses interest. This is an interesting idea. How stiff is the poem?

Most of the poets quoted in the essay seem to feel the first lines must command attention and offer authority, “the unadorned but resolute voice…who knows what he or she is talking about.” Language poems have called some of this into question. Questioning, lack of authority, lack of command can work sometimes, too. Feel free to experiment. Not everything will work.

Glaser introduces Howard Moss' idea of setting the initial music of the poem to “intrigue the ear and the mind.” Your first line not only influences the reader but manipulates the writer, setting off down a certain musical path or another. It's often hard to break free of this initial musical impulse.

My rubric for myself has always been 'try not to be boring.' This goes for subject matter, story and the language. Glaser talks about the first line being "implicitly dramatic" and the  drama of syntax (sentence structure) or delayed verb.

In any case, the first line of the poem is an exciting place to be for both the writer and the reader. Enjoy your first lines!

Suggested readings:
Glaser recommends Howard Moss essay "The First Line" from his book of essays, Whatever is Moving