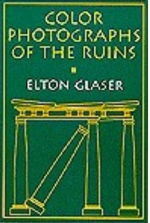 Elton Glaser came to visit Sarah Lawrence one day in the mid-1990s and read from Color Photographs of the Ruins, a book which I have not been able to find on Amazon strangely (even used) and only this one, very grainy photo. Although I do have a signed copy at home. I haven't read it yet.

Glaser also came with this essay in tow, “Entrances and Exits: Three Key Positions in the Poem” which you can’t find online or in a published book either.

I like a lot of this essay but not so much Glaser’s reason for writing it or for letting us in on why we should write good beginnings and endings: so overloaded readers of poetry can skim them to find promising prospects.

However dire the situation is for the gatekeepers of poetry journals and contests, I wouldn’t recommend that kind of reading practice Glaser calls “winnowing the worthwhile poems.” I’ve been pleasantly surprised too many times to depend on a poem's first or last line. Plus it’s very a ungenerous way to read strangers. Sure there’s an avalanche of poetry out there to read. For a professional reader, fine, use your silly tricks but that will just give you a lot of poems with soft middles.

For the rest of us, just read less poems and read them with your full attention. Live with the fact that you won’t be reading them all.

So you see, if I would have judged this essay but the same rubric Glaser recommends judging poems, I would have stopped reading it after page one, which is a shame because it has some great stuff in it. See?

Truth is there’s an art to getting in and out of a poem. And where there’s an art, there are rules and experimentation will always challenge those rules. Changes in cultural norms will result from those challenges. For example, jokes that sounded good in 1968 don’t work as well in 2020. We grow. But to break the rules, you should learn a few. And this essay is full of good rules.

Weak first and last lines can ruin the whole show. And a good title is like a marketing sign.

Glaser starts by listing some of the poets who have eschewed titles: Emily Dickinson, Ford Madox Ford, Robert Creeley. But at the end of the day, Glaser points out, all title-less poems get titles slapped on them anyhow, [unless no one cares] so you may as well put your vote in?

What Glaser says a good title does:

1. A good tile will add another dimension to the poem (sometimes drastically) or lead you to approach a poem “at on oblique angle” and you can look back at the title with “unforeseen connections” to the poem. There’s pleasure in tracking the distance traveled between the “initial premise and the unpredictable resolution.” He gives a great example of this with the poem “Eating Tomatoes” by Janet Beeler Shaw. He shows how the title defies expectations and morphs from mock-serious to sensual to solemn. At the end of the day, the matrix broadens with a good title.

2. A good title can make an obtuse poem accessible.

3. Glaser quotes Charles Wright in describing the “particular pleasure in thinking up titles.” This is true. Why give that up?

4. Titles can be “miniature poems in themselves."

5. The title can act as a preview on a theme or scene, highlight a crucial clue, trigger a poem’s tone.

6. A poem can also shake up the premise about a form or style with a misleading title. Like for instance using Ode or Sonnet and then subverting expectations.

Glaser reminds us that John Ashbery called titles a keyhole into the poem. And that sneak peak is often delicious and voyeuristic. So often good titles have a magical quality or the echo of a ringmaster calling you into the tent.