Henry David Thoreau, Nature and Poetics and a New Podcast 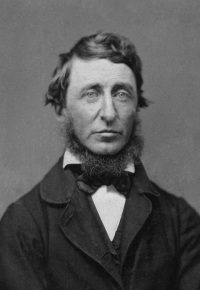 I have written about science and poetry on this blog before, all the way back from when I published my first book of poetry, Why Photographers Commit Suicide, a book part science poetry and part science-fiction. I'm always interested in breaking down the divide between literature and science. In that spirit, The Atlantic magazine published a great article tying Henry David Thoreau to this, "What Thoreau Saw" by Andrea Wulf.

Here are some pertinent quotes:

"Thoreau was staking out a new purpose: to create a continuous, meticulous, documentary record of his forays. Especially pertinent two centuries after his birth, in an era haunted by inaction on climate change, he worried over a problem that felt personal but was also spiritual and political: how to be a rigorous scientist and a poet, imaginatively connected to the vast web of natural life. Thoreau’s real masterpiece is not Walden but the 2-million-word journal that he kept until six months before he died. Its continuing relevance lies in the vivid spectacle of a man wrestling with tensions that still confound us. The journal illustrates his almost daily balancing act between recording scrupulous observations of nature and expressing sheer joy at the beauty of it all. Romantic predecessors like Samuel Taylor Coleridge and, centuries before that, polymaths like Leonardo da Vinci thrived on the interplay between subjective and objective exploration of the world. For Leonardo, engineering and math infused painting and sculpture; Coleridge said that he attended chemistry lectures to enlarge his 'stock of metaphors.'"

…"For Thoreau, along with his fellow Transcendentalists, the by-now familiar dichotomy between the arts and the sciences had begun to hold sway. (The word scientist was coined in 1834, as the sciences were becoming professionalized and specialized.)"

… "Crucial though the data and reports are, they eclipse precisely the sort of immediate, intuitive, sensual experiences of nature that are, in our Anthropocene era, all too rare. For Thoreau, a sense of wonder—of awe toward, but also oneness with, nature—was essential. We will, he understood, protect only what we love."

… "Attention to the pivotal moment when he began to use his journal as he never had before. On November 8, 1850, a year or so after his naturalist’s regimen had begun"...

…“And this is what truly staggers the mind,” Walls goes on. “From this point, Thoreau did not stop doing this, ever—not until, dying and almost too weak to hold a pen, he crafted one final entry."

…."Steeped in the sciences, Thoreau emphasized that orderly data needn’t be dead. Carl Linnaeus’s binomial system for classifying plants was “itself poetry,” and in the early 1850s Thoreau jotted in his journal, “Facts fall from the poetic observer as ripe seeds.”

..."Still, Thoreau felt the limits of disciplined scrutiny. 'With all your science can you tell how it is, and whence it is, that light comes into the soul?'"

… "The following summer he summed up the dilemma. 'Every poet has trembled on the verge of science."

My friend Kalisha tipped me off to this new podcast, Poetry Unbound, which is beautifully produced and digestible in short ten-ish minute podcasts. The first one I listened to was this poem by Raymond Antrobus, "A Poem About When We’re Disbelieved" posted on March 16. This podcast not only asked listeners to complete some homework at the end but made me quite emotional.